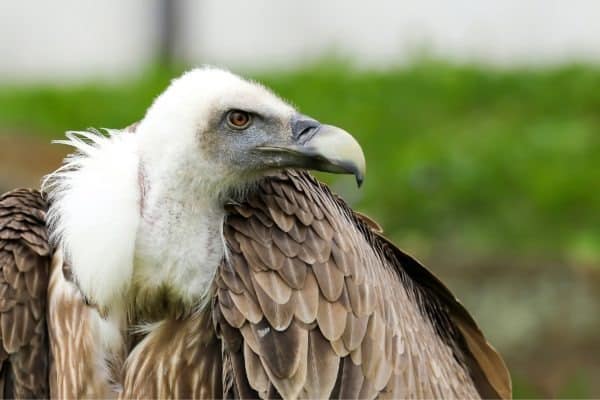 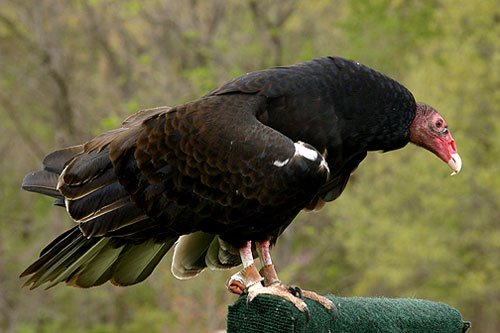 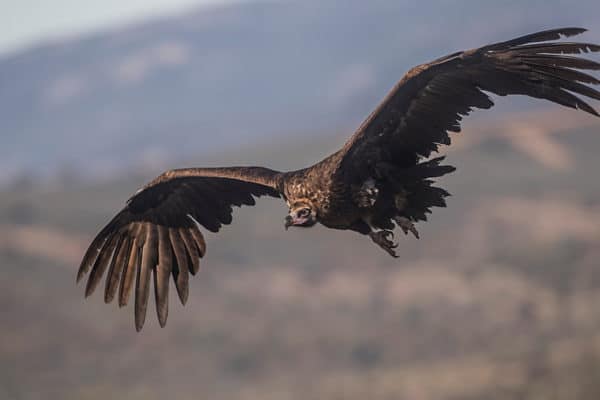 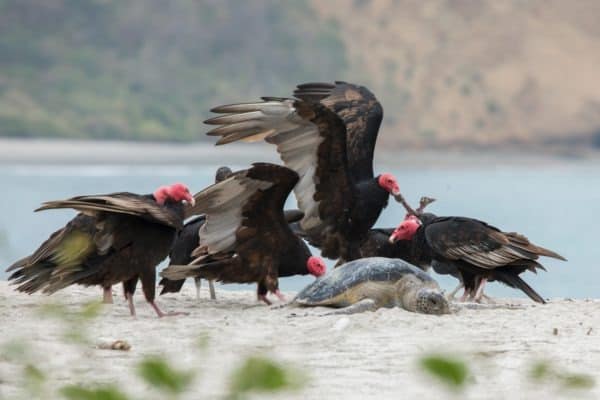 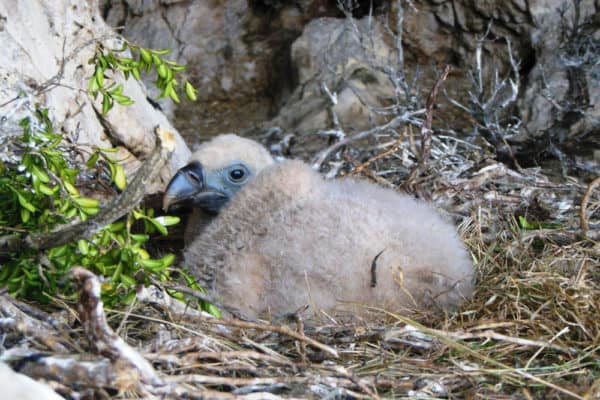 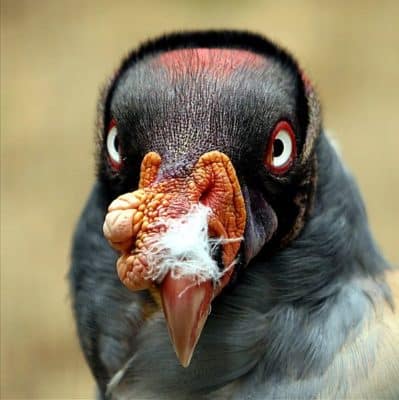 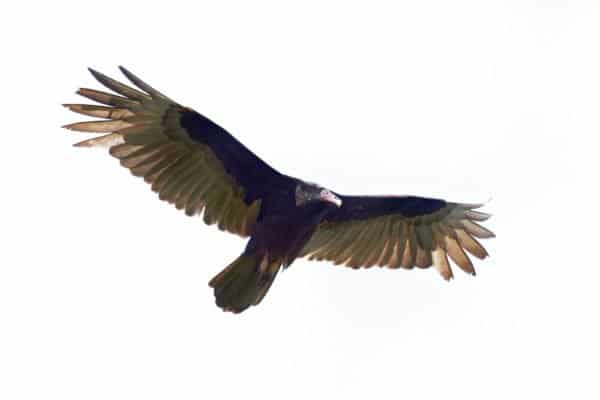 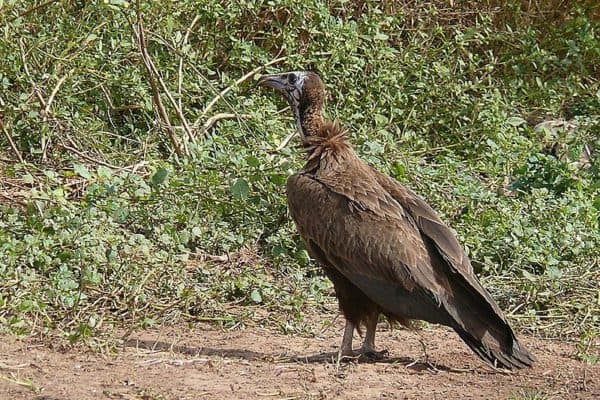 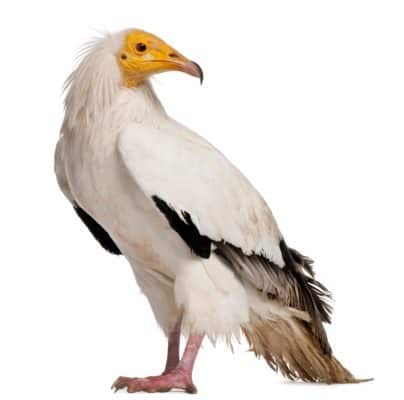 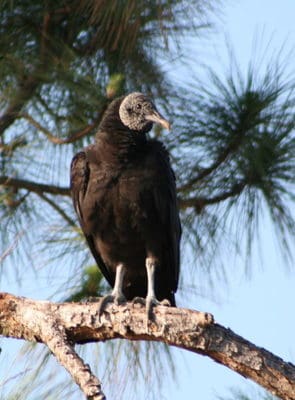 “The vulture is one of the world’s most common scavengers”

The fearsome-looking vulture is often regarded by people as a nuisance or portent of death. But they are actually an integral part of the natural ecosystem. By opportunistically feeding on whatever remains from other animals’ kills, these scavengers clean up dead animal matter from the environment that may contain harmful microbes and diseases. Due to human activity, however, many species are in steep decline around the world, which may encourage the spread of diseases.

Despite popular misconception, the word “vulture” does not describe the scientific classification of a single group. Instead, it is the informal name for many types of carrion-eating birds with similar characteristics. There are more than 20 species of vultures currently classified by taxonomists. They fall into two broad categories: Old World and New World vultures.

The vulture is an example of convergent evolution: two groups that independently evolved similar features and behavior but are taxonomically very different. In other words, despite being part of completely separate evolutionary lineages, they evolved to exploit a similar niche. New World vultures include the turkey vulture (Cathartes aura), the California condor, and the Andean condor. The Old World vultures include the Egyptian vulture, the Griffon vulture, the European black vulture, the bearded vulture, and the Indian vulture.

The vulture’s appearance, physiology, and behavior are all testament to its remarkable evolutionary adaptations over millions of years to fit a scavenger lifestyle. One of the most distinctive features is the bald head. It was once believed that this bald patch had evolved to prevent the feathers from becoming damp with blood when consuming a carcass, but another possible explanation is that it may also assist in the regulation of body temperature. The big sharp beak also evolved to tear away flesh and muscle from the bone. The bird’s talons and feet are adapted more for walking than killing prey.

The vulture has a rather dark and subdued appearance. It is covered in feathers of black, white, gray, and tan, though a few species exhibit brighter red or orange plumage. The legs often acquire a white coloration due to the presence of uric acid from the bird’s waste. It is believed that the uric acid helps to kill microbes and regulate feet temperature.

They vary in size, though most species are large and formidable like birds of prey. The largest species of Old World vulture is the cinereous or black vulture. It measures more than 3 feet long with a wingspan of around 9 feet, and it weighs almost 30 pounds. The largest New World vulture is the condor with a wingspan of more than 10 feet. By comparison, the gigantic albatross has a wingspan of almost 11 feet. These birds’ unique feather adaptations have enabled it to become an expert at soaring miles above the ground in search of dead or dying animals. Whenever it gets cold, the bird will sometimes spread out its wings in the sun to warm up.

Because of their distinct evolutionary lineages, both New World and Old World vultures differ quite a bit in several key aspects. One of the most important differences is their nesting behavior. Old World vultures prefer to construct nests out of sticks. New World vultures, on the other hand, do not build nests of any kind and tend to lay their eggs on bare surfaces. These nesting areas are sometimes inhabited by large colonies of birds. A group of vultures is known as a venue or committee.

Another important difference between the two groups lies in their senses. Some New World vultures have a keen sense of smell that allows them to detect carcasses from long distances away. This is an uncommon trait among many bird species. Old World vultures traditionally rely more on their sight to locate food like a typical bird.

New World vultures also lack the throat structure—which is known as the syrinx—that gives voice to many birds. They are still capable of hisses and grunts but cannot make the kinds of complex sounds and calls for which birds are widely known. This limits their ability to communicate with each other as well.

Most species of vultures tend to spend most of their time within a narrow geographic range, but northern-based species like the widespread turkey vulture are migratory during the winter months. The turkey vulture spends most of the summer in the northern United States and then travel south when the weather starts to become cold.

As the name implies, Old World vultures inhabit a huge swath of territory in Europe, Asia, and Africa, except for Australia and the Pacific islands. The New World vultures inhabit a mostly unbroken stretch of territory in the Americas south of Canada. Both types prefer hot or tropical climates but also inhabit temperate climates as well. They can be seen hunting in relatively remote locations, usually near large open expanses, and roost in cliffs, trees, and sometimes on the ground. Vultures tend to avoid human settlements but sometimes may attempt to eat roadkill or garbage left behind by people.

Vultures belong to a special class of carnivore known as a scavenger. This means they feed almost exclusively on carrion—the leftover remains of dead bodies—but they are not particularly discerning about what kind of animal they eat. Although they are not adept at hunting, they have been known to opportunistically kill wounded animals and hasten their deaths. They will also sometimes follow a dying animal, patiently waiting for it to perish. If the animal’s hide is too tough to pierce, then they will allow other predators or scavengers to feed on it first. They can sometimes be seen side by side with other scavengers at a single carcass.

Vultures have highly specialized enzymes (essentially a type of protein) in their stomachs to neutralize dangerous microbes that would otherwise pose a danger to most animals. In this way, they clean up rotting carcasses from the environment that have been left behind by other predators. They are voracious eaters, sometimes consuming up to 20 percent of their own body weight in a single sitting. They are extremely thorough in their consumption, often leaving very little of the carcass. The bearded vulture even consumes the bones.

Due to their size and strength, they have few natural predators in the wild, though young chicks are often vulnerable to predation from eagles and other carnivorous birds, as well as big cats like the jaguar. Small mammals are also known to steal and consume the eggs. Thus, the nest requires vigilant protection from dangerous predators.

Human activity poses the biggest threat to vultures. Some of the most pressing dangers include illegal hunting and electrocution from power lines. They are also threatened by the loss of habitat in some parts of their natural range. Perhaps the greatest human threat to them is accidental poisoning. In India and Pakistan, entire populations have been decimated by toxins that seep into the ecosystem. They can easily die when they feed on the carcasses of farm animals filled with medication.

Vultures exhibit quite a lot of variability in their reproductive behavior. Each species may have its own specific breeding season and unique courtship ritual to attract a mate. These birds are mostly monogamous species and tend to only have one mate at a time.

After copulating, the female will lay around one to three eggs in a single clutch. It takes about a month or two to fully incubate the eggs. In some species, both parents will raise and protect the young chicks. Unlike birds of prey, they do not carry food back in their talons, but instead, regurgitate food from a specialized pouch to feed the young.

After several months of diligent care, the chicks will begin to fully fledge, meaning that they will gain their flying feathers. But even after achieving some measure of independence, the chicks may not immediately leave the nest. They may choose to stay with the family to feed and protect the next generation.

For the typical species, the young birds will finally achieve full sexual maturity at anywhere up to eight years of life. These birds usually live at least 11 years in the wild, though some species can live to nearly 50.

Population numbers appear to be falling across the globe, leaving the vulture, as a group, in a perilous state. According to the IUCN Red List, critically endangered species include the red-headed vulture (which has less than 10,000 left), the white-rumped vulture (also less than 10,000), the Indian vulture (about 30,000), the white-headed vulture, and a few other species, many of which are Old World vultures. However, this is not uniformly true of every species. The turkey vulture is listed as a species of least concern with a vast range across South America, Central America, and the United States. This species currently receives legal protection in the US under the Migratory Bird Act.

In response to declining numbers, some governments have made an effort to restore natural habitat, eliminate poaching, and reduce harmful toxins in the environment. Conservations are also raising, nurturing, and caring for captive birds in an effort to rehabilitate their numbers and reintroduce them into their former habitats.

Vultures in the Zoo

Vultures are a major feature at many American zoos, including the San Diego Zoo, the Saint Louis Zoo, the Oregon Zoo, and the Maryland Zoo. The Oregon Zoo raised a female turkey vulture named Clyde (born in 1985) as part of its Wild Life Live! show.

View all 4 animals that start with V

What does vulture mean?

It is believed that the name vulture is derived from the Latin word vellere, which means to pluck or tear.

What is a turkey vulture?

The New World turkey vulture is one of the most common species of vultures around the world. As mentioned previously, it occupies nearly the entire American hemisphere except for most of Canada. The name of the species comes from its resemblance to the common turkey. There are five different subspecies of turkey vultures, some of which overlap with each other in its natural range.

What does the turkey vulture eat?

As with all vultures, the turkey vulture feeds on the carrion of dead creatures. Very rarely does it hunt live animals. The species is not always large enough to tear the skin off some carcasses and sometimes relies on other vultures or birds to help it feed.

Are vultures dangerous to humans?

Vultures pose basically no risks to humans and will usually seek to avoid human contact completely. Despite their scavenging lifestyle, they are probably no more likely to spread disease, and in fact may be less likely, than many other animals thanks to their strong anti-microbial defenses. This puts them in a special class of carnivores.

Where do vultures live?

Vultures are widespread around the world. They usually inhabit deserts, plains, shrublands, and other wide-open areas.