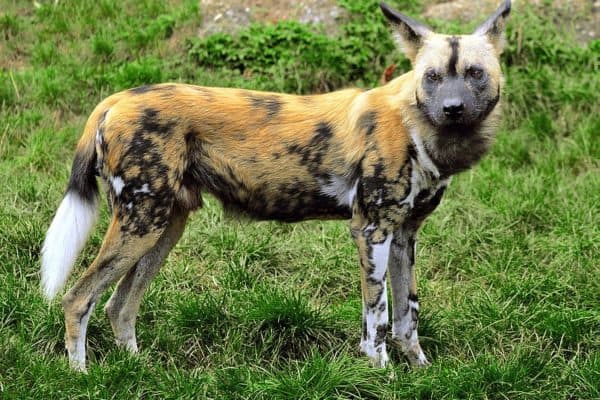 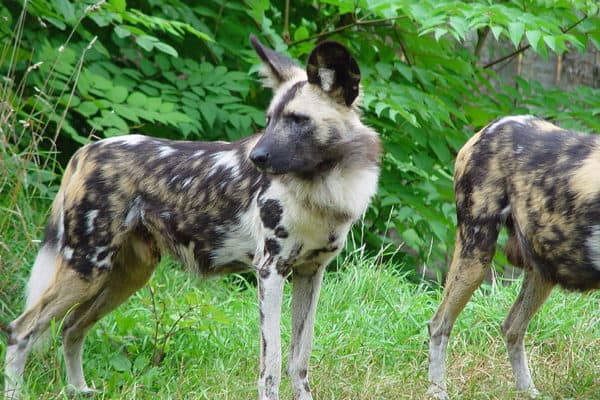 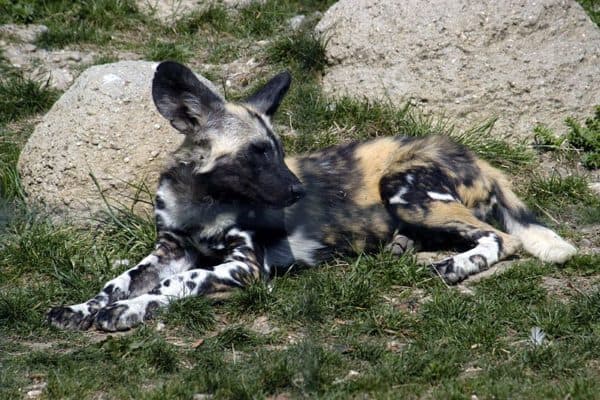 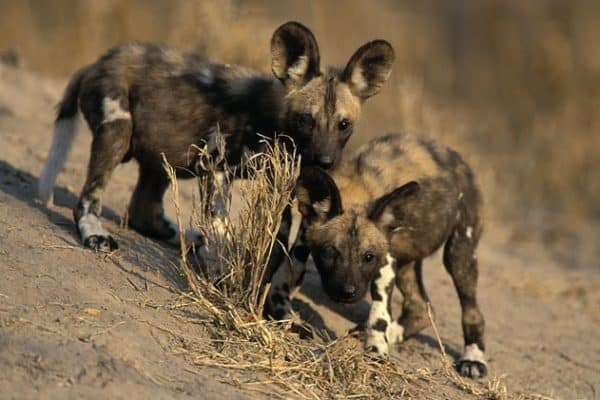 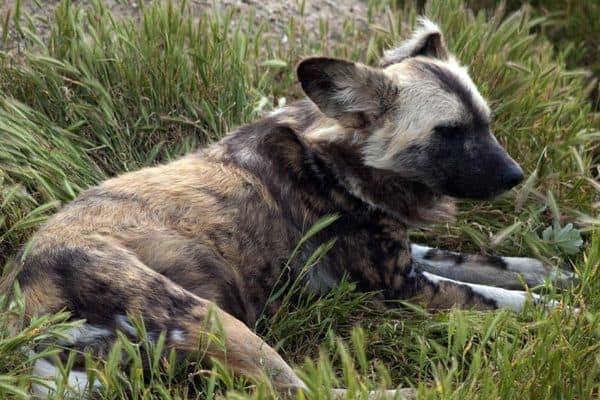 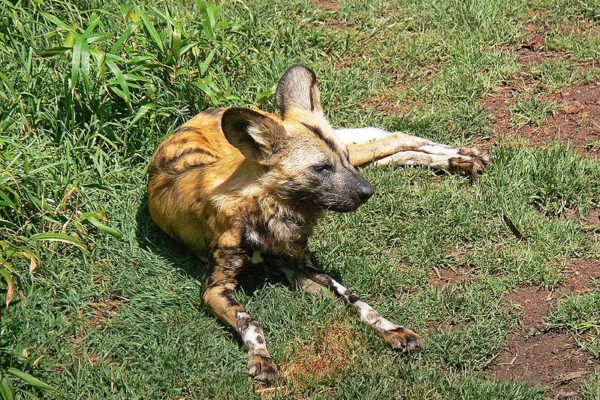 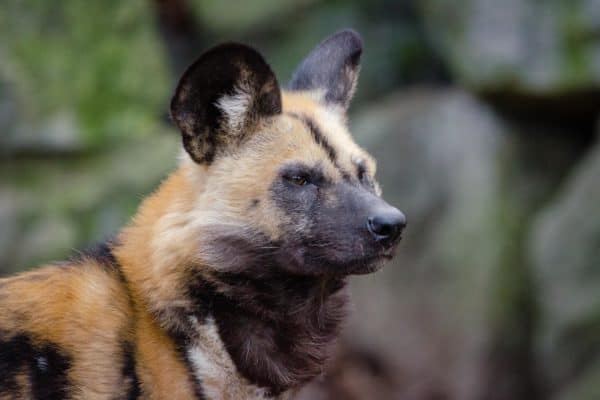 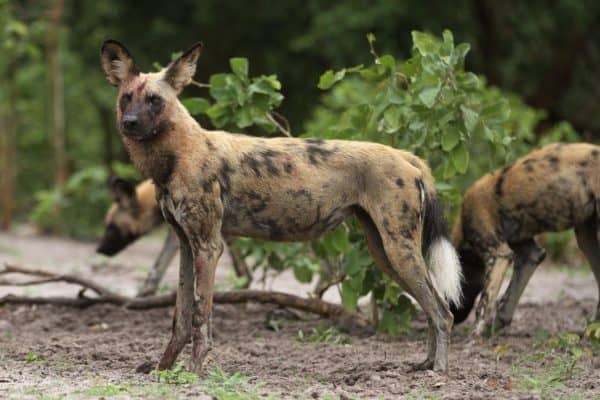 Also known as the painted dog!

The African Wild Dog (also known as the Painted Dog and the Cape Hunting Dog) is a medium sized species of canine found across sub-Saharan Africa. The African Wild Dog is most easily identified from both domestic and other wild Dogs by their brightly mottled fur, with its name in Latin aptly meaning painted wolf. The African Wild Dog is said to be the most sociable of all the canines, living in packs of around 30 individuals. Sadly however, this highly intelligent and sociable animal is severely under threat in much of its natural habitat, primarily due to habitat loss and having been hunted by Humans.

African Wild Dogs are highly sociable animals that gather in packs of generally between 10 and 30 individuals. There is a strict ranking system within the pack, led by the dominant breeding pair. They are the world's most sociable Dogs and do everything as a group, from hunting for and sharing food, to helping sick members and assisting in raising young. African Wild Dogs communicate between one another through touch, movement and sound. Pack members are incredibly close, gathering together before a hunt to nose and lick each other, whilst wagging their tails and making high-pitched noises. African Wild Dogs lead a crepuscular lifestyle meaning that they are most active during dawn and dusk.

In African Wild Dog packs, there is usually only one breeding pair, which are the dominant male and female members. After a gestation period of around 70 days, the female African Wild Dog gives birth to between 2 and 20 pups in a den, which she remains in with her young for the first few weeks, relying on the other pack members to provide her with food. The African Wild Dog cubs leave the den at between 2 and 3 months old and are fed and cared for by the entire pack until they are old enough to become independent and generally leave to join or start another African Wild Dog pack. It is thought that the more looked after the pups are, the higher their chances of survival.

The African Wild Dog is a carnivorous and opportunistic predator, hunting larger animals on the African plains in their big groups. African Wild Dogs primarily prey on large mammals such as Warthogs and numerous species of Antelope, supplementing their diet with Rodents, Lizards, Birds and Insects. They are even known to hunt much larger herbivores that have been made vulnerable through sickness or injury, such as Wildebeest. Although the African Wild Dog's prey is often much faster, the chase can last for miles, and it is this Dog's stamina and perseverance that makes them so successful, along with their ability to maintain their speed. Hunting as a pack also means that the African Wild Dogs can easily corner their prey.

The long large intestine of the African Wild Dog means that they have a very efficient system for absorbing as much moisture from their food as possible. This gives these canines an advantage in such arid climates as they do not need to find such a regular supply of water. African Wild Dogs are therefore able to go for long periods of time without needing to drink. Unlike many other carnivores, African Wild Dogs kill their prey by starting to bite it when it is still alive. Although this may sound cruel, the animal actually dies more quickly and less painfully than if it was killed in the generally preferred way.

African Wild Dog populations have been declining rapidly across the southern African countries mainly due to loss of much of their natural habitat and the fact that they are commonly hunted by farmers in particular. The slightly savage nature of the African Wild Dog has led to a great deal of superstition regarding it, with locals having almost wiped out entire populations in certain areas. The loss of their historical ranges generally due to growing Human settlements has also led to drastic declines in populations throughout much of their environment. Although the majority of the African Wild Dog population is today confined to National Parks, they tend to require much larger territories and come into conflict with Humans when they leave these protected areas.

Today, the African Wild Dog is listed as an Endangered species as African Wild Dog population numbers have been rapidly declining, particularly in recent years. There are thought to be less than 5,000 individuals left roaming sub-Saharan Africa today, with numbers still declining. Hunting, habitat loss and the fact that they are particularly vulnerable to the spread of disease by livestock, are the main causes for the continent's African Wild Dog loss.

How to say African Wild Dog in ...