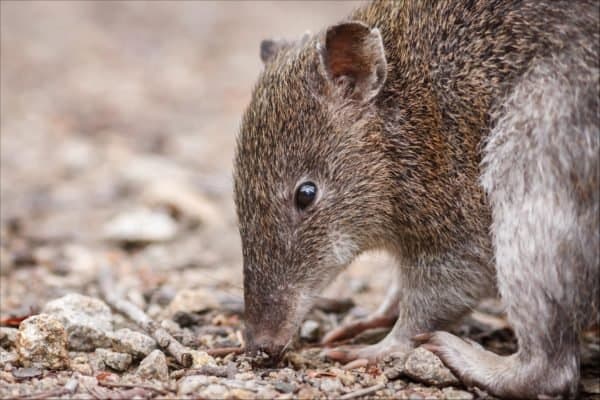 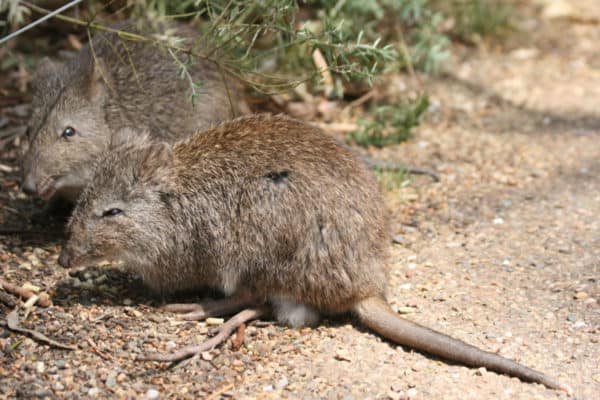 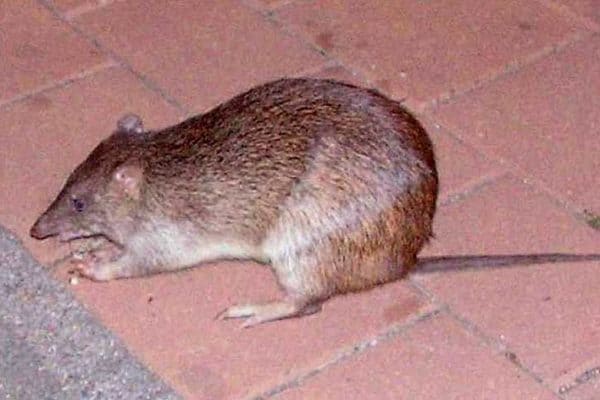 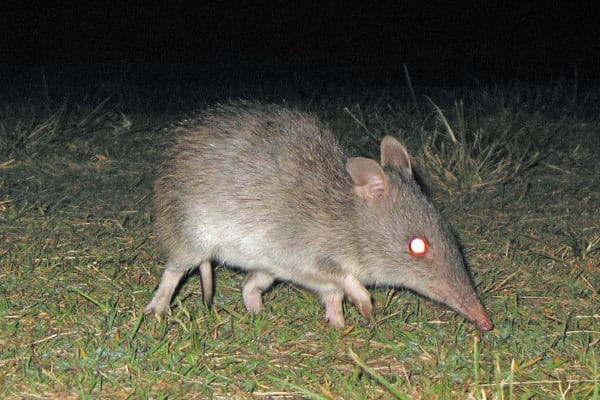 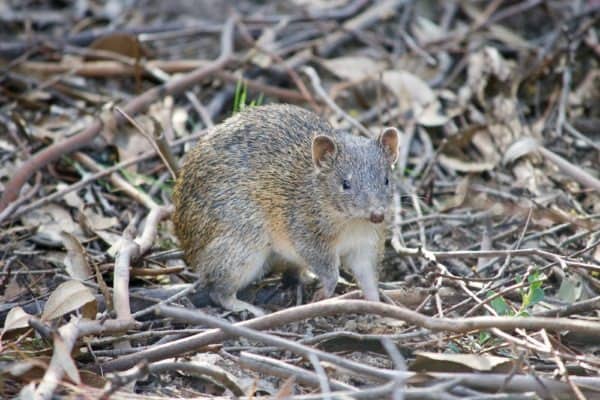 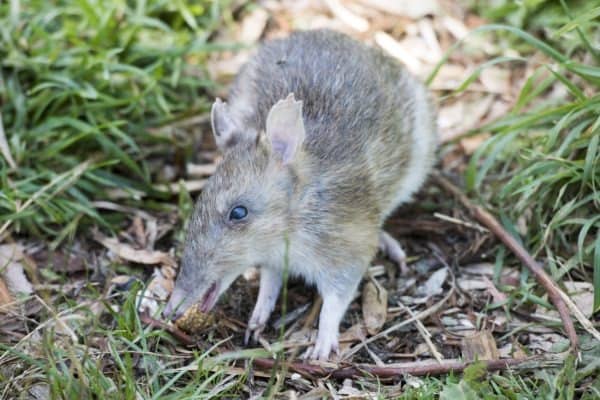 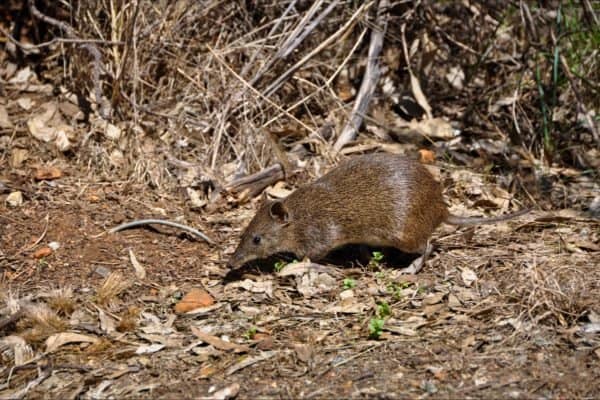 The humble bandicoot is one of the world’s most well-known marsupials.

Endemic to the Australian region, this small to medium-sized mammal looks like it was cooked up in a laboratory. The unusual appearance has earned it comparisons to rodents, rabbits, or even opossums. But it is an entirely unique type of animal all to its own. The bandicoot’s calling card is the ability to poke the ground with its long snout in search of food. This has sometimes earned it the name of snout poker. However, due to changes in the Australian ecosystem, long term population numbers are in significant decline.

The word “bandicoot” is an informal name for a group of omnivorous marsupials that comprise the order Peramelemorphia. An order, of course, is the next highest taxonomical group of organisms right below class. To give you some idea of the diversity this implies, all living and extinct primates occupy a single order as well.

The order Peramelemorphia includes both the true bandicoots and the closely related bilby, which is a desert-dwelling animal known informally as the rabbit bandicoot. As scientists have learned more about the bandicoot’s evolution and behavior, they have changed the classification several times, splitting apart some groups and combining others. Currently a single family known as Peramelidae contains most living species of bandicoots. Within this family, the Australian bandicoots and New Guinean bandicoots are generally split into different genera. There are currently more than 20 known species of bandicoots documented across the entire order.

The name bandicoot is actually a rough translation of a word pandi-kokku, or pig-rat, from the South Indian language of Telugu. The term was originally applied to an unrelated group of rodents in India before it was adapted to describe the marsupial. It also goes by several different names in local dialects.

When first discovered, the bandicoot was originally mistaken for a type of rodent. This confusion can still occur among people today who don’t know the difference. However, the bandicoot actually descends from the marsupial lineage. Its most distinguishing features are the pointed snout, big ears, long hairless tail, round black eyes, and plump body. The hair color is brown or tan, sometimes mixed with black or white markings. The hind limbs tend to be longer than the front limbs, and two of the toes are fused together, similar to the kangaroo.

Due to its immense diversity, the bandicoot has a large range of different body sizes. It typically varies between 12 and 31 inches in length, while the tail adds another four to 12 inches. This makes it on average about the size of a house cat. Males may be up to twice as large as females, but otherwise the sexes are similar in appearance. The main difference exhibited by the female is the rear-facing pouch with six to 10 teats to protect and feed the young. The bandicoot is one of the few marsupials to have a developed placenta. However, this placenta is small and lacks certain features, thus separating it from most other placental mammals.

The bandicoot is nocturnal in its behavior, meaning it comes out at night to feed and avoid dangerous predators. Spending most of its time hunting and foraging for food, it has a sharp sense of smell and hearing that can easily distinguish potential prey below the ground. To locate food, the bandicoot can dig holes with the sharp front claws and long snouts. It will sometimes travel more than a mile each night in search of food.

Bandicoots are solitary hunters that only congregate with each other for the breeding season. They tend to live alone in nests near a source of water. This nest is typically comprised of a small hole in the ground with a covering of foliage and vegetation. Each bandicoot has a natural range, which it will defend aggressively from intruders. The natural range of male and female bandicoots will sometimes overlap. Males are more particular about keeping other males out of their territory.

When threatened, one of the bandicoot’s main adaptations is its speed and agility. Its powerful hind legs enable it to jump in the air to affect a quick escape. Although bandicoots can bite, scratch, or kick, the main means of defense is to run away and hide.

Despite its largely solitary nature, the bandicoot makes several distinctive vocalizations and sounds depending on its mood. It will sometimes emit a pig-like grunt when it’s foraging and searching for food. It will also make squeak and hissing sounds when disturbed or agitated. There are additional vocalizations when mating or locating other individuals.

Like most marsupials, the bandicoot evolved almost exclusively in its native habitat of Australia, Tasmania, New Guinea, and many smaller Pacific islands around the region. Highly adapted to this unique ecosystem of this area, the bandicoot can occupy a large range of different habitats, including woodlands, rainforests, wetlands, and grasslands at various elevations. The thick vegetation helps to conceal them from potential predators with relative ease. Bandicoots are also capable of adapting to human environments. Buildings, vehicles, and other human structures provide ample protection and hiding spots for the small animal.

Although these animals can sometimes be a nuisance by consuming plants and crops in gardens and farms, this annoying behavior is usually outweighed by its propensity to consume insects and other common pests as well. For this reason, the bandicoot is often a net good to humans on average.

Because of the small size and relative physical weakness, the bandicoot is a natural prey animal for native dingoes, snakes, owls, and other large birds. The introduction of foreign predator species such as cats, dogs, and foxes over the centuries has put additional pressure on population numbers. It is also believed that direct competition with rabbits may be a potential threat to the animal.

Human encroachment is no less dangerous to the bandicoot. Most species are suffering from a loss of habitat, particularly from farming and industry. The clearance of forests not only disrupts the animal’s natural territory, but also makes it harder for them to hide from predators. As humans have reshaped the Australian ecosystem, bandicoots are more likely to be killed by diseases carried by cats and other animals. They are also carriers and vectors for their own diseases, which they can spread to people or domesticated animals.

The reproductive behavior of the bandicoot remains a bit of a mystery. What we do know is that they have a particularly long breeding season that may occur at different times of the year, depending on the species. It is believed that males and sometimes even females can have multiple mating partners throughout the breeding season. This ensures a high reproduction rate to counter the relatively high rate of mortality and death often encountered among the young.

Partners will spend only a short amount of time together. The male bandicoot will usually depart soon after copulation, leaving the female to raise the young on its own. A female bandicoot will produce anywhere between two and six young at a time, although a single animal may produce multiple litters per breeding season. The gestation period lasts a very short 12 to 15 days before the children are born.

After emerging from the womb, the young bandicoots, which are known as joeys, will remain in the mother’s pouch for the next month or two. During this time, the joeys are naked and undeveloped and measures only about half an inch in size while feeding on the mother’s milk. After leaving the pouch, the young joeys will continue to stay in the mother’s nest until they are ready to live and forage on their own.

The typical bandicoot will reach sexual maturity within the first five or six months of its life. However, compared to many other mammals, the lifespan of the bandicoot is quite short. It is known to live only two or three years in the wild.

The conservation status of the bandicoot varies widely between species. The long-nosed bandicoot, which occupies the eastern coast of Australia, is currently listed as least concern by the IUCN Red List. However, many other species are near threatened or endangered. It is currently not known how many bandicoots are left in the world, but it is believed that they are mostly in long term decline across most of the natural range. The genus of pig-footed bandicoots, which had particularly long and thin legs, went extinct in the 20th century. The eastern barred bandicoot is completely extinct in mainland Australia and now only resides in Tasmania.

Conservationists are making an effort to breed endangered bandicoots in captivity and reintroduce them to predator-free areas in the wild. But in order to establish long term healthy populations, conservationists will also need to restore dense foliage and remove foxes and rabbits from the ecosystem. In short, the Australian landscape will need to look more like its pre-colonial state.

What is a bandicoot?

A bandicoot is a small or medium-sized marsupial that roams the forests and grasslands of Australia. The pouch is one of the distinguishing characteristics to identify it as a marsupial.

Bandicoots pose almost no danger to humans. However, they do have powerful claws and teeth that can potentially cause damage if the animal is agitated or scared.

Can bandicoots be pets?

It is currently illegal to poach or catch bandicoots in Australia. However, the legality of owning a captive-born bandicoot varies by state. Due to their wild nature and skittish behavior, bandicoots may not make for the most cooperative pets. If you see an injured or distressed bandicoot, then you should attempt to contact local wildlife experts and not raise it yourself.

Is a bandicoot a rat?

How did the bandicoot evolve?

Careful analysis of the evidence suggests that bandicoots evolved some tens of millions of years ago. However, bandicoots are poorly represented in the fossil record and have left behind only a few incomplete bones so far. Much of what we know about bandicoot evolution was obtained from genetic analysis. By looking at certain key points of the genome, scientists can learn how different species are related and how far back they split off from each other.

How to say Bandicoot in ...