Form bands of up to 12 individuals!

Click through all of our Collared Peccary images in the gallery. 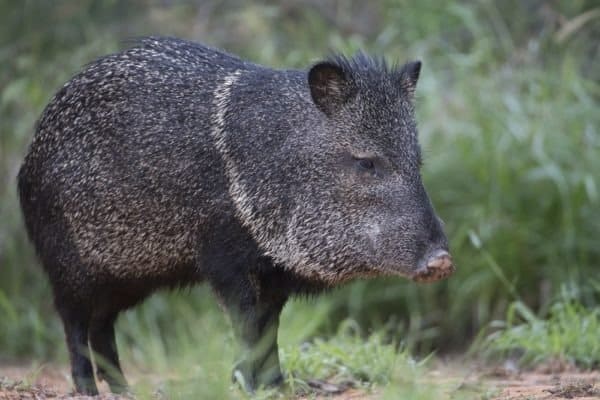 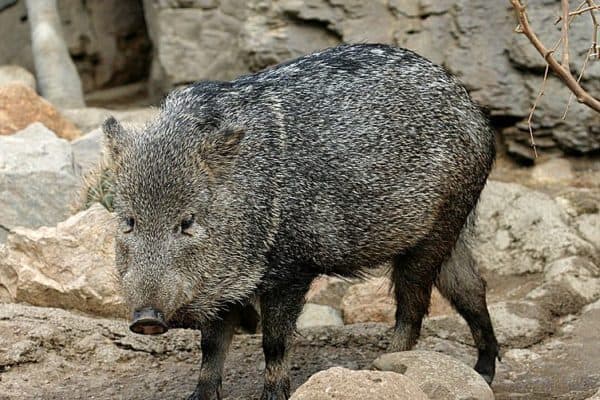 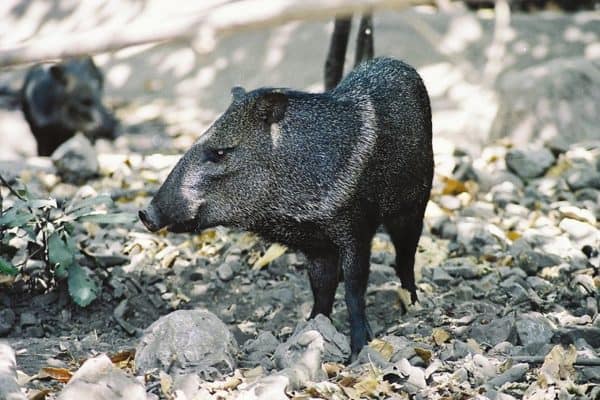 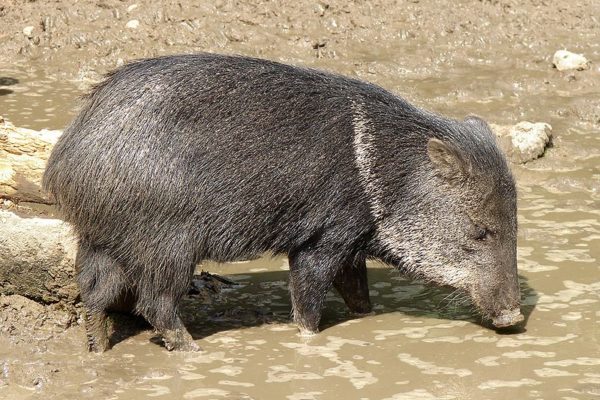 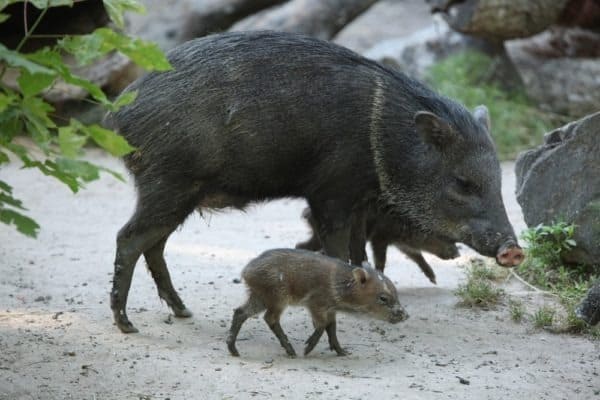 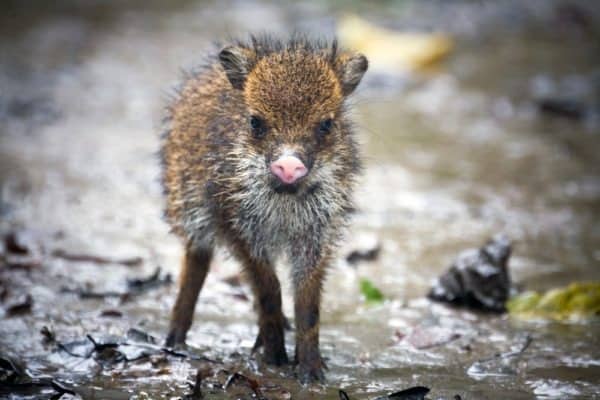 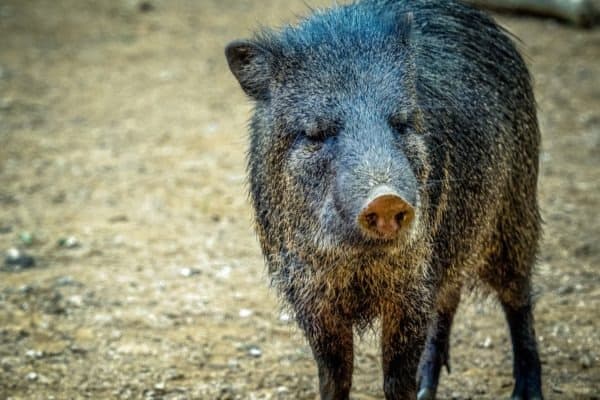 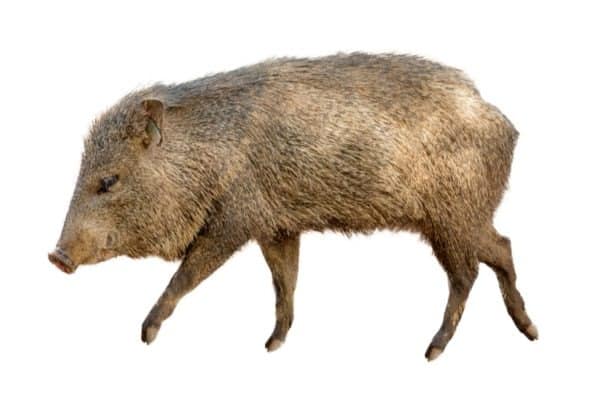 View all of the Collared Peccary images!

The collared peccary (also called a musk hog or javelina) is commonly mistaken for a pig or boar.

But despite their similar appearances, the peccary is not a true pig in any sense of the word. Because of the differences in the skeleton, teeth, and stomach, they belong to entirely different families. This species is endemic to the warm and tropical regions of the Americas, where it’s thriving as one of the most common mammals.

The scientific name of the collared peccary is Pecari tajacu. Both Pecari and peccary derive from the South American language of Carib. The pronunciation of both terms is peck-uh-ree. Tajacu appears to be the Portuguese term for the species. There are three currently recognized species of peccaries, all of which are classified within the family of Tayassuidae (or javelinas), including the Chacoan peccary and the white-lipped peccary.

The peccary bears a striking resemblance to a wild boar. It has a large, angular head, a circular snout, small ears, a barely visible tail, and huge canines (which do not protrude from the lips). The coarse fur has a dark brown color with a light brown or white lining that extends like a collar from the lower jaw to the back (hence the name of the species).

The teeth are one of the main distinguishing factors between the pig and the peccary. The latter has vertical canines that grow straight up or down rather than the curved canines of boars. These canines lock together to stabilize the jaw and improve the force of the bite. Although this dental arrangement limits the chewing to a simple up and down motion, it also allows the peccary to exert enough force to crack open the exceptionally tough shell of a palm nut.

The collared peccary is the smallest of all peccary species, measuring less than 3 feet long from head to tail and 12 to 20 inches at shoulder height and weighing between 37 and 66 pounds on average. The largest members of this species grow to some 93 pounds and 3.5 feet. This is about the size of a medium to large dog breed.

The collared peccary’s social life revolves around very close and cohesive herds consisting of five to 15 individuals (though sometimes up to 50). These herds exhibit standard hierarchical behavior with a dominant male at the top and the rest of the ranking determined by size. Except when they break up into smaller foraging groups, the facts suggest that these herds are fairly stable units. The hierarchy doesn’t change much, and they rarely accept new members. This species is most active during the day, but feeding and foraging times shift more toward nighttime in the summer to deal with the oppressive heat.

Each group covers a massive territory sometimes reaching over 1,000 hectares in size (a single hectare is equivalent to 10,000 square meters). Both males and females will defend the territory with aggressive displays such as squaring off, flattening their ears and chattering with their canines. A fight is a vicious affair that can cause serious injury due to full body contact or bites.

Collared peccaries exhibit some of the same traits as a pig. They wallow in mud to cool down, have excellent swimming capabilities, and find food buried in the soil with their amazing sense of smell. In fact, smell is the main means of communicating with each other and obtaining sensory information. Collared peccaries give off a strong musky odor through a gland on their back (hence the name musk hog). The scent is then rubbed on rocks, trees, and stumps to mark their territory. It’s also used to identify other members of the group. This compensates for their small eyes and relatively poor sight.

Unlike many other hoofed animals (including pigs), the collared peccary lacks a ruminating stomach that allows it to ferment plant material to break it down. Instead, this species has a more complex three-chambered stomach for digesting tough plant matter. The peccary stomach is actually more efficient than the stomach of the closely related pig.

Collared peccaries are also fairly intelligent creatures with a rich emotional life. A series of videos captured in central Arizona as part of a school science fair project shows a herd appearing to grieve over the death of a fellow member. Over a period of 10 days, the herd repeatedly returned to the corpse, slept beside it, and chased away coyotes from it. This was the first report of collared peccaries engaging in such behavior, but it is highly suggestive. The depth of their interactions with the dead body probably couldn’t be explained by curiosity alone.

The collared peccary occupies a massive unbroken range that extends from the Southern United States (as far north as Phoenix and Tucson) down to Argentina. The only Caribbean islands where it’s endemic are Trinidad and Tobago, but it has been introduced into several others. This species occurs in a variety of different habits: tropical rainforests, shrublands, grasslands, swamplands, and mesquite deserts with prickly pear cacti. It has also adapted to life in residential human neighborhoods.

The peccary serves as an important intermediary part of the local ecosystem. It transfers nutrients and resources between plant matter and small prey at the bottom of the food chain and apex predators at the top. They also play an important though inadvertent role in dispersing seeds throughout the ecosystem. As small seeds pass through their digestive tract and the rest are spit out, new plants are created across their entire territory.

What does the collared peccary eat?

The collared peccary has a very wide palate that encompasses both meat and plants, but the bulk of its diet consists of roots, bulbs, beans, nuts, berries, fungi, grass, and cacti. They sometimes supplement the diet with calcium, sodium, chlorine, and magnesium from naturally occurring mineral licks.

The exact composition depends on the nature of its habitat. In the southern part of the range, the collared peccary is more likely to consume meat from snakes, fish, frogs, eggs, and carrion. In deserts, the agaves and prickly pears are the most prized foods because of their high water content. In rainforests, the diet is largely fruit-based. One study estimated that the collared peccaries of Peru consumed some 128 different plant species.

What eats the collared peccary?

Apex carnivores such as pumas, coyotes, jaguars, and bobcats are the main predators of the collared peccary. Humans have also traditionally hunted this species for food and hide dating back thousands of years.

Collared peccaries have no set mating season. They are free to breed at any time of the year based on climate and rainfall. The dominant male jealously guards all breeding rights with the females of the herd. The lesser males have no breeding rights themselves, but unlike many other hierarchical species, they stay within the herd for the entire year instead of forming their own all-male bachelor groups.

After a gestation period of around five to six months, the female peccary leaves the herd to give birth alone. She produces one to three, but rarely four, offspring at a time. Weighing no more than 1 to 1.5 pounds, these newborn are dependent on the mother and her older sisters. The rest of the herd is not trusted with the young.

Peccaries develop rapidly over a short period of time. The young is fully weaned off its mother’s milk at two to three months of age. Females reach sexual maturity between eight and 14 months, while males reach sexual maturity at a more consistent 11 months. Tropical peccaries tend to give birth more often than the desert-based peccaries, possibly due to the abundance and availability of resources. The life expectancy of this species is some 24 years in the wild, but many fall victim to predators before they die of old age. In captivity, where they are free from predators and most diseases, some peccaries exceed 30 years of age.

Precise population estimates are hard to come by, but the IUCN Red List currently considers the collared peccary to be a species of least concern with stable population numbers. Some local populations in Central America and the Amazon may be threatened due to the destruction of the rainforests. But because the species is so adaptable, it can live in a wide range of different habitats, even among humans.

Collared Peccary in the Zoo

The collared peccary is a prime exhibit at the Happy Hollow Park and Zoo in San Jose, the Potawatomi Zoo in South Bend, the GarLyn Zoo in Naubinway, Michigan, and the Phoenix Zoo. In Canada, this species can be found at the Greater Vancouver Zoo.

How big is a collared peccary?

The collared peccary measures less than 3 feet long and weighs between 37 and 66 pounds on average.

What is another name for the collared peccary?

The collared peccary goes by many different names, including musk hogs, saino, and baquiro. On the island of Trinidad, it is called a quenk. Peccaries as a family are alternatively known as javelina, the Spanish term for a boar. The pronunciation of this is ha-veh-lee-na.

Is a collared peccary a pig?

No, despite their similarities, they actually belong to different taxonomical families. Pigs and boars belong to the family of Suidae, while the peccaries belong to the family of Tayassuidae. Some taxonomists consider these families to be very closely related, but there are some key differences between them. The peccary has a different skeletal structure and dental arrangement. Some toes are reduced or absent. And it lacks the ruminating stomach of pigs and boars.

Attacks on humans are very rare, but due to their size and power, a peccary can cause serious injury to a person. It is not a good idea to approach a peccary, let alone an entire herd of them.

Peccaries are not related to rodents at all (besides the fact that both are mammals). This species actually belongs to the order of Artiodactyla. Consisting of all even-toed hoofed animals, this order has a pronunciation of ar-tee-oh-dak-ti-luh. Members of include domesticated cattle, giraffes, buffaloes, hippos, and goats. Rodents occupy their own separate order.

Collared Peccaries are Omnivores, meaning they eat both plants and other animals.

What Kingdom do Collared Peccaries belong to?

What class do Collared Peccaries belong to?

What phylum to Collared Peccaries belong to?

What family do Collared Peccaries belong to?

What order do Collared Peccaries belong to?

What genus do Collared Peccaries belong to?

What type of covering do Collared Peccaries have?

In what type of habitat do Collared Peccaries live?

What is the main prey for Collared Peccaries?

What are some predators of Collared Peccaries?

Predators of Collared Peccaries include coyotes, mountain lions, and jaguars.

How many babies do Collared Peccaries have?

The average number of babies a Collared Peccary has is 3.

What is an interesting fact about Collared Peccaries?

Collared Peccaries form bands of up to 12 individuals!

How to say Collared Peccary in ...