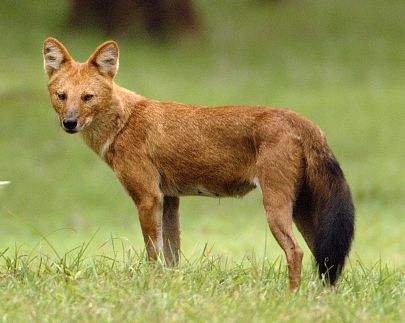 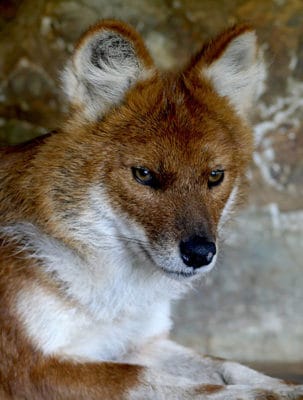 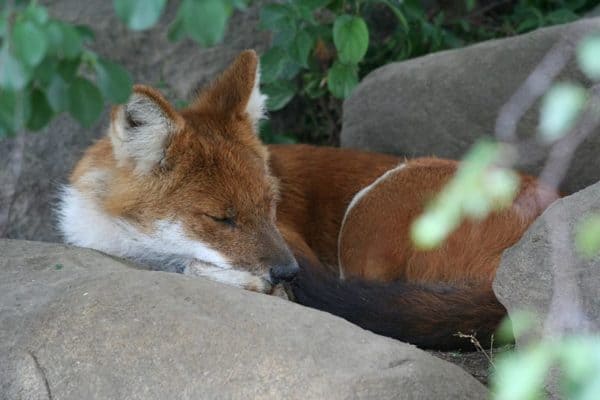 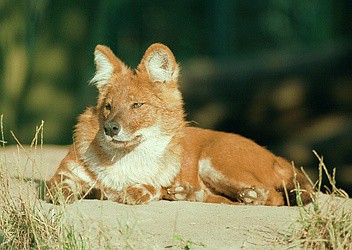 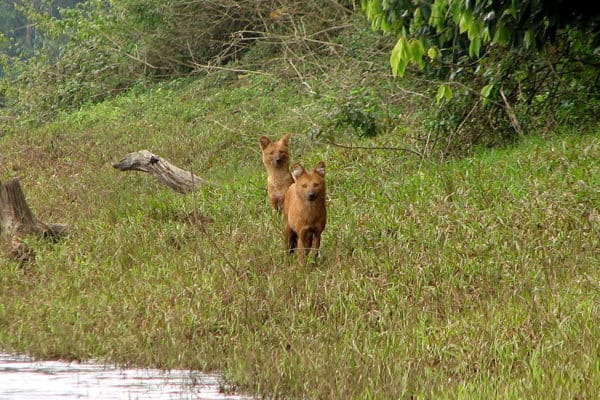 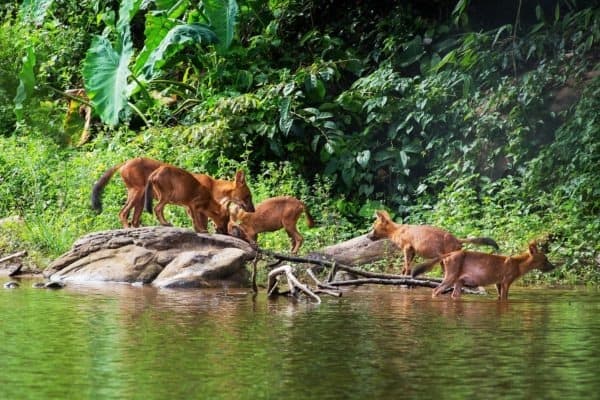 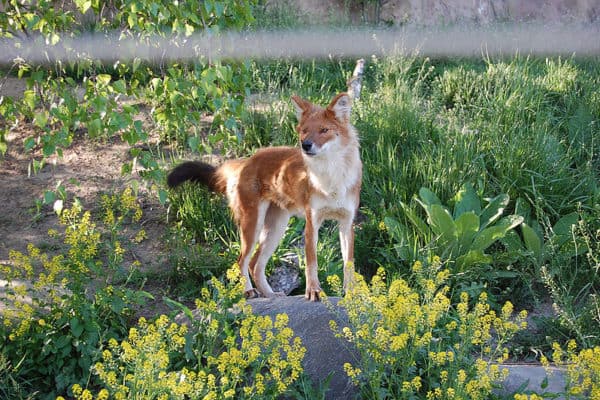 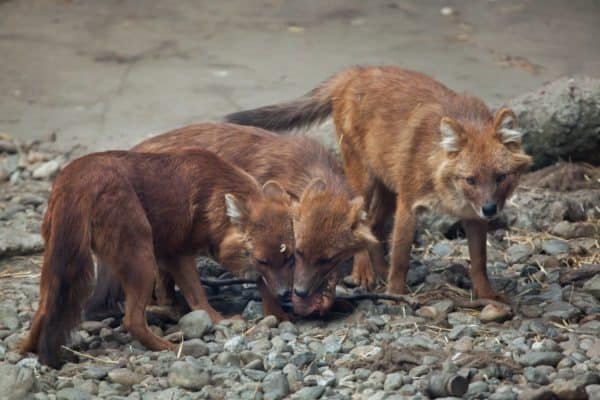 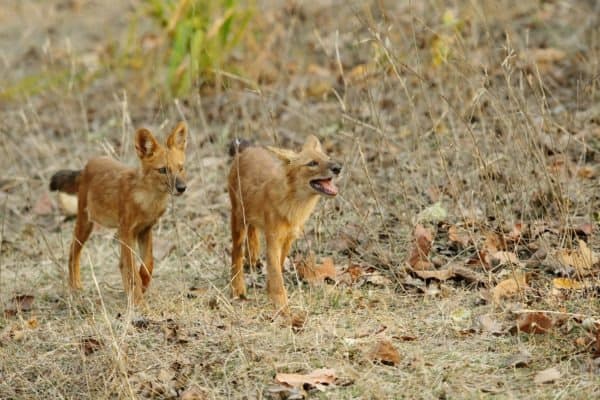 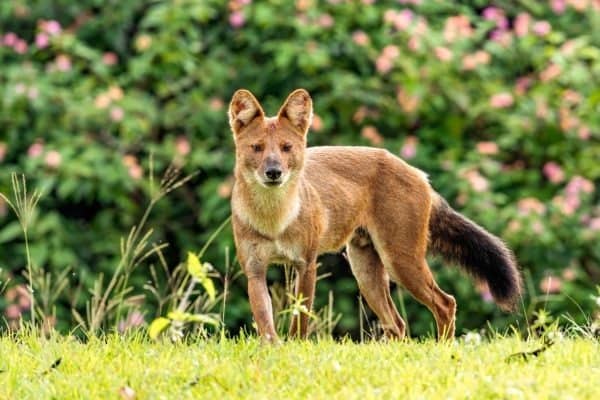 Once a wide-ranging wild dog species that covered nearly half the globe, the dhole is now an endangered species with an estimated population of fewer than 2,500 adults. Dholes inhabit dense jungle, steppes, mountains, scrub forest, and pine forest. Their coloring can range from charcoal gray to red or brown with yellow, white, or otherwise light colored highlights. Despite being members of the dog family, dholes do not bark or howl, but they have unique screams, chattering, clucking, and whistles that they use to communicate and hunt with.

The dhole, also known as the Asiatic red dog, Indian wild dog, or mountain wolf, has the scientific name Cuon Alpinus. The dhole is a member of the family Canidae and the class Mammalia.

While it is a close relative of animals within the genus Canis, there are several distinct differences. The dhole's skull is concave, it is missing a third lower molar, and the upper molars possess only one cusp.

The dog is about 30 to 40 inches long, in addition to an 11 to 19-inch tail, and it can weigh anywhere between 30 to 46 pounds. Depending on the region, they can vary in color from a yellowish hue to a darker red-brown color. They do have lighter coloration along their chest, belly, and paws.

The average dhole, including its tail, is about as long as R2D2, of Star Wars fame, is tall. Males typically weigh more than females and are larger. While they are fox like in appearance, dholes are more akin to a medium to large sized dog.

Dholes are highly social animals, and they frequently hunt in packs of 5 to 12. These clans may grow to as many as 30 or 40 members. These wild dogs are carnivores, and they generally hunt deer or sheep. However, there have been recorded instances of dholes attacking animals as large as a tiger or bear.

Dholes are also very vocal animals. As a member of the dog family, they whine and growl much like your family pet. Unique to these animals, though, is a series of clucking noises and screams that is not found anywhere among other canines. They are also known to communicate through whistling and chattering while hunting.

Unlike other canid species, dholes very rarely display in fighting behavior. It may even be difficult to pick out the dominant male-female pair of the pack. They work as a unit to rear the pack's pups, and the young adult animals are free to join other packs without trouble upon reaching maturity.

Dholes are wide-ranging, and they are found throughout Eastern and Southeastern Asia. Once, these wild dogs could be found across North America, Asia, and Europe. Around 12,000-18,000 years ago, they were reduced to specific areas within the Asian continent. Dholes can now be seen as far north as Siberia, as far south as some Malaysian islands, and as far west as the Indian peninsula. Due to the vast area they can be found in, they survive in an equally wide variety of habitats such as

Dholes, like other dogs, cover a large area. Their average territory can be 34 square miles. That's larger than the entire area of Manhattan! As such, they are extremely fast runners, swimmers, and jumpers.

Dhole dens are typically underground and may be simple or very complex with many tunnels. Dholes have even taken over jackal dens. The entire pack will inhabit one den and may utilize multiple entrances.

As mentioned earlier, Dholes are carnivorous. Primarily they hunt hoofed mammals in packs; however, due to their vast habitat, they are highly adaptable, and they hunt whatever is available in that specific region.

Their need for enough food is actually the reason for such a large habitat to begin with. The dhole hunting parties take down their prey, swallow large portions of it whole, and then transport it back to the rest of the pack. Dholes have even been known to eat over one kilogram of meat in under four seconds; that's as heavy as three quarters of a human brain!

The dhole is not specifically prey for any other predator. Tigers, leopards, and other predators that share habitat with the dhole have killed them, but the reverse is also true. The primary source of conflict between these higher-level predators is because of food scarcity.

The major threats faced by the dhole are not from other animals. Dholes are suffering from habitat loss specifically due to deforestation for agricultural, residential, and commercial purposes. This habitat loss leads to a decline in available prey, and it increases the subsequent threat of competition from high-level predators in the area.

Also, related to this loss of habitat is the persecution of the dhole by humans in the area. Failing to find adequate food from their usual prey source, they adapt and occasionally hunt domesticated animals. The resulting retaliation from farmers has been devastating to the dhole population as a whole.

Disease has also proven to be a major threat to them. Their exposure to pathogens has drastically increased with their proximity to, and association with, domesticated dogs as well as their predation of other domestic animals.

A dhole pack will typically contain more than one breeding female. In the wild, they have been observed to mate during October through January, but this may vary in captivity. A baby dhole is called a pup. They are born in large litters typically consisting of 5-10 pups but sometimes as many as 12 to 16.

The gestational period is approximately 60 days, and the babies are suckled by their mother for a period of similar length. During this time, any pregnant females share the den and the pups interact freely. While their mothers ween them, the entire pack helps feed the pups by regurgitating their food.

The pups grow much faster than wolf or dog pups. Their growth is more similar in rate to that of a coyote. By six months, the pups are accompanying the pack on hunts, and at eight months old they take on active roles in the hunt.

After maturing, dholes can leave the pack and join another without the challenging or fighting common in other wild dog species. Typically, around the age of three, females leave the pack to join another. In the wild, the average lifespan for these animals is around 10 years. Captive dholes average 15 to 16 years of life.

The true population size of the dhole is very difficult to assess. Their tendency to inhabit locales that are sparsely populated, or contain unfavorable terrain, make it nearly impossible to get a firm figure for their population. In addition, dholes, in areas that have been studied, have frequently experienced wild population swings over short periods of time.

The best estimate is a total population between 4,500 and 10,000 animals with mature adults making up as few as 2,200. For that reason, these wild dogs are listed as endangered, and the population is assumed to be in continued decline.

Dhole in the Zoo

There are only three places in North America where you will find these wild dogs. The Minnesota Zoo, the San Diego Zoo, and The Wilds operated by the Columbus Zoo, all have captive dholes. Notably, the staff at The Wilds have recently hand-raised a litter of pups when their mother died shortly after birthing them.

Are dholes carnivores, herbivores, or omnivores?

Dholes are primarily carnivores; however, there are reports that they will occasionally eat berries or small amounts of vegetation.

What is a dhole?

A dhole is a wild dog that ranges throughout much of Asia. As a member of the family Canidae, the dhole is related to several species of wild canids such as jackals, foxes, and wolves. Like those animals, the dhole is a social animal that travels in packs of five to twelve members, but these packs may form hunting groups of 30 to 40 members.

Are dholes dangerous to humans?

Dholes are not a threat to humans. Humans are not prey, nor do humans typically compete with dholes for food. As the dhole is not an overly territorial animal, the only way a threat to humans would be likely is if the dhole pack itself perceived a threat from the human. It would be wise to remember that dhole packs have proven capable of killing adult tigers.

Several researchers have noted that adult dholes in captivity have remained wild and aggressive even after extended periods of time. Dhole pups, on the other hand, are docile, playful, and can be allowed to play with domestic dog puppies without incident. It is unlikely that a dhole would do well as a pet.

Can a dhole kill a tiger?

Dholes don’t actively hunt or pursue tigers. Increased competition for prey due to deforestation has lead to occasional conflict between the species, and packs of dhole have been known to kill tigers.

Dholes are endangered primarily due to the population decline they are experiencing as a result of the loss of habit and food sources due to deforestation. Lack of prey animals, who have also experienced a loss of habitat, has spurred increased competition with other predators and driven the dhole to prey on domestic animals.

This contact with domestic animals has increased dholes exposure to numerous pathogens that they are ill-equipped to fight. It has also resulted in farmers actively retaliating against the species for attacks on their livestock.

What is the Wanshang dhole?

The Wanshang dhole is a fictional, cryptozoological creature invented for several American science fiction television shows in the early 2000s. It took the name from the dhole, but it used the ancient Chinese legend of the nine-tailed fox for its true inspiration. This trickster fox was capable of opening locks, making human-like noises, and devouring men. Ironically, although the dhole bears a striking resemblance to the fox, the creature was depicted as more similar to a Husky breed of dog.