Hummingbird eggs are just half an inch big. Click through all of our Hummingbird images in the gallery. 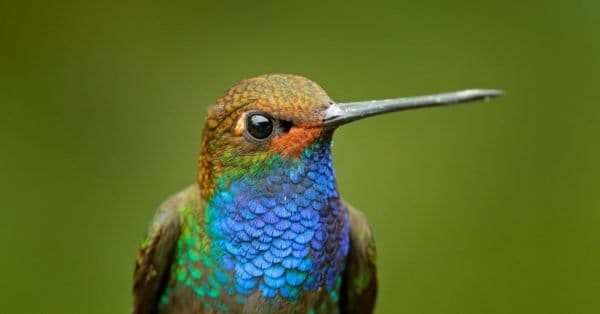 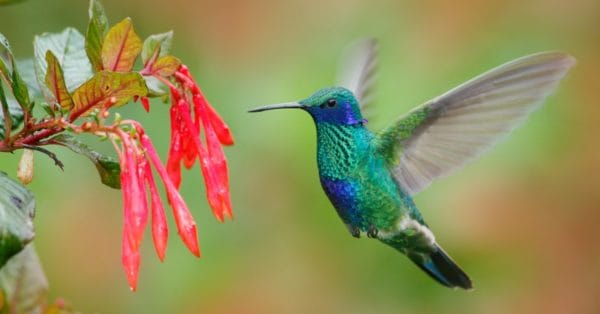 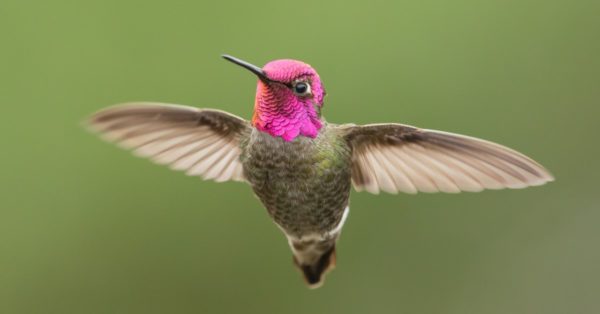 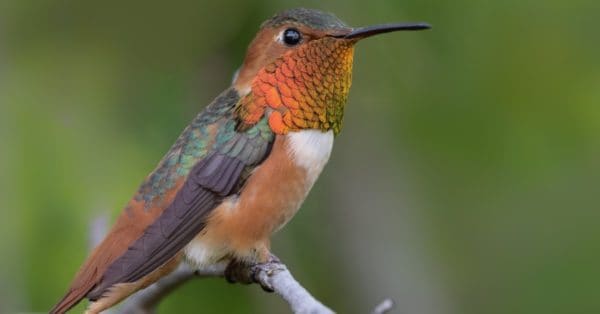 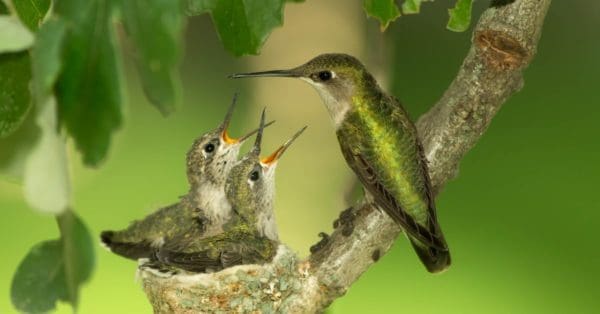 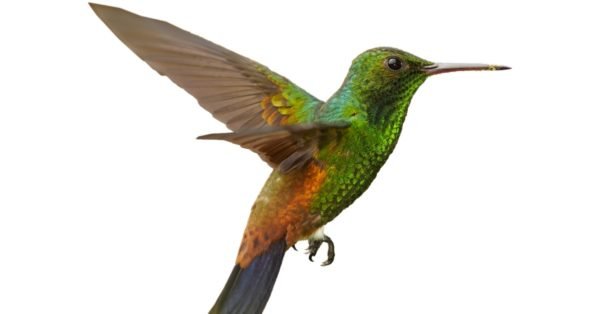 View all of the Hummingbird images!

The hummingbird is small in size — usually only about 7.5 to 13 centimeters in length.

Native to the Americas, hummingbirds largely form the family called Trochilidae, which is also their scientific name. There are about 350 different known species of hummingbirds including the bee, anna, ruby-throated, and topaz. However, the list keeps on updating each year as variations are discovered.

The smallest of the hummingbird – which is the bee hummingbird – weighs just about 2 grams. Two species of these birds have now known to have gone extinct. They are also famous for their ability to fly backward.

Where to Find Hummingbird Birds

Bird watchers are in luck – hummingbirds can be sighted in a variety of places, spanning across the Americas. However, even among the 340 different species, these birds are not located beyond the New World, so you might need to travel if you are in the Eastern Hemisphere.

Different types of these birds, like bee, anna, topaz, and ruby-throated hummingbirds are found in different parts of the world. The easiest way to find one of these unique and special birds is to get closer to the equator, since these birds like the warmth. With over half of the known species that live right along the equator, you can still spot them above Mexico.

Some of the places where these small birds are found include the Southwestern states such as California, Arizona, Texas, and New Mexico. In these places, areas like the Davis Mountains State Park in Texas and/or the Ramsey Canyon Preserve in Arizona are popular hotspots for hummingbird sightings.

These birds go by the scientific name Trochilidae and belong to a family that goes by the same name. They belong to the kingdom Animalia and Phylum Chordata. Their class is called Aves and the order is called Apodiformes.

Trochilidae is rooted in a Greek word – trochilos – which is interpreted to mean “a small bird” by some sources. However, it can also be traced to the Ancient Greek word τροχίλος, which means “Egyptian plover.” A plover is a wading bird that is rather stout with a short bill, which is much different than a hummingbird.

These birds look slightly different than normal birds, which is part of their beauty. Despite their streamlined stubby bodies, they have gracefully long bills and wings. While their extremely tiny legs can make it difficult to walk around, they don’t need to – their wings move about 10-15 times per second, allowing them to hover in place.

This incredible speed is only one way that their flying is both unusual and captivating. The power of their wings makes them the only birds that can fly backward. In the blink of an eye, they can change directions, seeming to hover in the air. If they so choose, the bird is even capable of flying upside down.

These birds are known to be aggressive birds and often shoo the intruders away. They are among some of the fiercest birds which often seems contradictory to their tiny size. They not only successfully drive away large birds but can attack other animals and even human beings.

The bird’s diet includes consuming half of their own weight worth of sugar, which why sugar water is the easiest way to attract them to a bird feeder. These birds feed themselves about five to eight times per day, also finding this sugar from nectar and fruit.

When they aren’t grazing on sugar, sugar water, or natural nectar, the hummingbird will also seek out insects and invertebrates as nourishment. Their preferred diet consists of ants, spiders, beetles, mosquitos, gnats, weevils, fruit flies, and aphids, making them ideal guests around any home. In a pinch, they’ll also find whatever food is captured in spider webs.

Hummingbird: The Bird’s Predators and Threats

These birds, especially owing to their tiny size, have a lot of predators, which may be why they have to be so aggressive to defend themselves. Their eggs are at constant risk of falling victim to predators, though one of their biggest threats is that of humans.

As cities become more urbanized, the natural habitats of these animals dwindle. Deforestation is a major problem for hummingbirds, but the average bird enthusiast can contribute by adding a hummingbird feeder and ample foliage around their yard to attract the birds for a place to build a nest and eat.

These birds are in constant peril as they avoid the clutches of frogs, snakes, lizards, squirrels, chipmunks, blue jays, crows, and other aggressive birds.

Their eggs need special attention to avoid predators as well. Even once hatched, the eggs and young are sought out by blue jays, squirrels, chipmunks, and crows.

What do hummingbirds eat?

Hummingbirds usually feed on the nectar from flowers, as well as broken fruit that they can source natural sugar from. While they will go after small insects, these birds aren’t much of a predator. The only time they will go after any game bigger than a spider or beetle is if they feel threatened, but only to defend themselves (not to eat).

Hummingbirds start mating when they are one year of age. Every year, female hummingbirds can raise up to three baby broods – which means six baby hummingbirds per year.

Before mating, a male hummingbird has to convince the female hummingbird that he would be a perfect match for her. For that reason, the males tend to be a little more colorful, which is a natural evolutionary trait of most bird species.

Female hummingbirds are known to be solitary mothers; after impregnating the female, males move on with their lives. She stays behind to lay her eggs, incubating them for about two weeks. The eggs are about the size of navy beans. Typically, during one breeding session, female hummingbirds usually lay only two eggs.

Their young – which are called chicks – will remain in the nest as their mother nurtures and feeds them for up to four weeks after birth. The lifespan of hummingbirds is about three to five years.

While the exact population of hummingbirds is not known, some species of hummingbirds like the ruby-throated hummingbirds are as many as 34,000,000 in number according to an official American survey. There are over 300 different species, though about half of the birds live along the equator.

Does the hummingbird migrate?

These birds occupy parts of North America during the summer months. However, most of these tiny birds migrate to other places.

How many eggs do a hummingbird lay?

How fast does a hummingbird fly?

Some hummingbirds fly at a speed of about 90 km per hour.

What is a hummingbird’s wingspan?

On average, the wingspan of most hummingbirds ranges from three to five inches.

When do hummingbirds leave the nest?

Baby hummingbirds leave their nest about 18 to 28 days after being born.

Can a hummingbird hurt you?

Yes, hummingbirds can attack humans when they are aggressive.

Do hummingbirds bond with humans?

Yes, hummingbirds can bond with humans and can get attached to people who feed them. They sometimes even perch on a finger.

How do you make hummingbird food?

How fast do hummingbird wings flap their wings?

How many types of hummingbirds are there?

Hummingbirds have about 350 different known species.

Are Hummingbirds herbivores, carnivores, or omnivores?

Hummingbirds are Omnivores, meaning they eat both plants and other animals.

What Kingdom do Hummingbirds belong to?

Hummingbirds belong to the Kingdom Animalia.

What class do Hummingbirds belong to?

Hummingbirds belong to the class Aves.

What phylum to Hummingbirds belong to?

Hummingbirds belong to the phylum Chordata.

What family do Hummingbirds belong to?

Hummingbirds belong to the family Trochilidae.

What order do Hummingbirds belong to?

Hummingbirds belong to the order Apodiformes.

What type of covering do Hummingbirds have?

Hummingbirds are covered in Feathers.

What genus do Hummingbirds belong to?

Hummingbirds belong to the genus Trochilinae.

In what type of habitat do Hummingbirds live?

What is the main prey for Hummingbirds?

What are some predators of Hummingbirds?

Predators of Hummingbirds include hawks, snakes, and lizards.

What are some distinguishing features of Hummingbirds?

Hummingbirds have long, thin beaks and the ability to hover.

What is an interesting fact about Hummingbirds?

Hummingbirds beat their wings up to 80 times per second!