The kakapo male attracts mates with a loud booming sound

Click through all of our Kakapo images in the gallery. 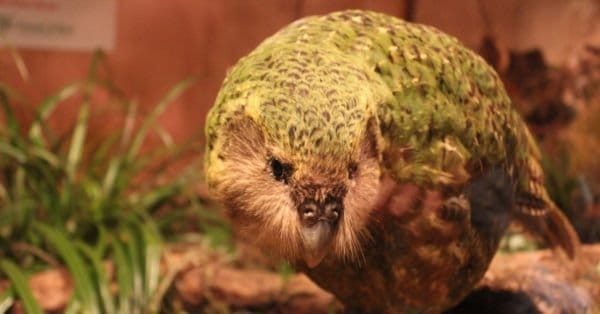 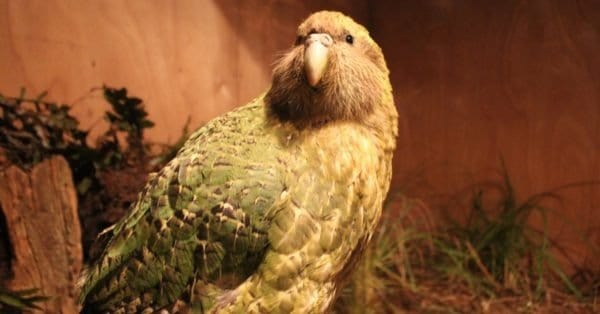 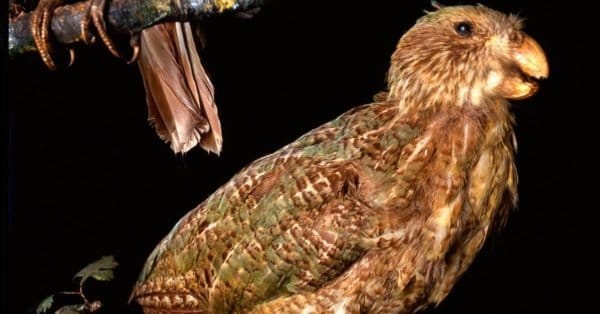 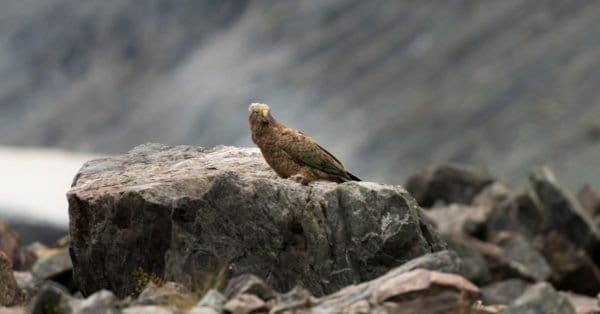 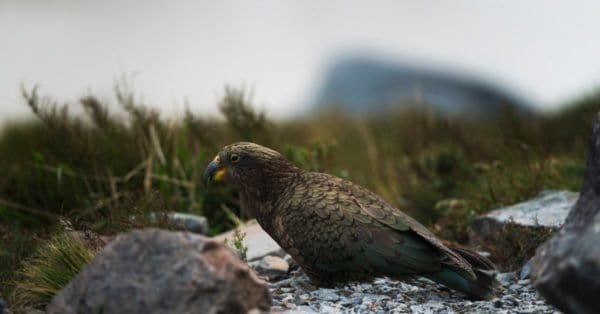 View all of the Kakapo images!

Originating on the island of New Zealand, the kakapo is a large flightless bird that has evolved to fill a similar ecological niche as land mammals in the way that it roams the forest floor in search of food at night.

Though it was largely free of predators for millions of years, the introduction of actual mammals from outside the island had a devastating impact on kakapo numbers, since the birds were unprepared to deal with the threat of carnivores. Today this bird has become something of a minor conservation celebrity around the world.

Where to Find the Kakapo

These parrots are forest-dwelling birds that evolved entirely in its original native habitat of New Zealand.

The kakapo constructs its nest under the cover of plants, within rock crevices, or inside of hollow tree trunks.

The scientific name of the kakapo is Strigops habroptilus. The genus Strigops (of which the kakapo appears to be the only living member) is derived from two separate Greek words: Strix, meaning owl, and ops, meaning appearance or face. The species name habroptilus is also the combination of two Greek words: habros, meaning soft, and ptilon, meaning feather. The closest living relatives of the kakapo are the fellow New Zealand birds, the kea and the kaka. Together, all three species belong to the wider order of parrots known as the Psittaciformes.

The kakapo has a long, round tail, a big but short beak (surrounded by delicate, whisker-like feathers), and a robust body with green and brown plumage. Resembling the owl from which its scientific name derives, the kakapo has forward-facing eyes and disc-like feathers on the face that redirect sound toward the ears. These adaptations allow the kakapo to perceive its surroundings very well in low-light conditions.

Like many other island-specific birds, the kakapo’s anatomy has evolved entirely in the absence of many serious predators. This means, most importantly, it can afford to be big. Measuring up to 25 inches in size and weighing up to 13 pounds, the kakapo is one of the largest parrot species in the world. As a consequence of this ground-based lifestyle, the kakapo has evolved smaller wings that cannot possibly support its large weight.

Although it cannot fly, the kakapo does have the amazing ability to climb up trees with its strong feet. Among the more amazing facts, this bird will utilize its wings as a parachute to float safely to the ground. The wings also provide balance as it’s walking or running. The kakapo is not a social species, per se, except in the mating season. They are highly territorial birds that warn away trespassers with a loud “kraak” sound. But each bird is intelligent and appears to exhibit a unique personality.

The kakapo is an herbivorous animal that grinds up food with its beak and mouth. Unlike many other bird species, it lacks the specialized organ known as the gizzard that normally grinds up food. It’s also one of the few land birds that can store large amounts of energy as body fat.

What does the kakapo bird eat?

The kakapo consumes fruits, seeds, leaf buds, shoots, tubers, rhizomes, pollens, mosses, and fungi, all of which vary by season and location.

For millions of years, the kakapo encountered few natural predators in the wild. But the first wave of Polynesian settlers also brought rats and other mammals that fed on vulnerable chicks left alone in their nest for hours as the mother went in search of food. The arrival of European settlers completely transformed New Zealand’s ecosystem with the destruction of forests and the introduction of cats, ferrets, and stoats. By the 1950s, the kakapo was almost completely extinct. Only heroic conservation efforts succeeded at saving the kakapo, but the species is still considered to be critically endangered by the IUCN Red List.

What eats the kakapo bird?

Before large carnivorous mammals were introduced to New Zealand, the kakapo’s main predators were large birds of prey. It could usually fool other birds by freezing in place to blend in with the forest surroundings. But carnivorous mammals proved to be a more effective predator by hunting the kakapos with their scent. Because the kakapos had not the time to evolve formidable defenses against land mammals, this had a devastating effect on population numbers.

It’s perhaps no exaggeration to say that the kakapo has one of the most elaborate and fascinating courtship rituals in the entire animal kingdom. As the reproduction period approaches (between December and February or March), male kakapo will leave their home territory and establish a mating area in the hilltops. These leks, as they’re called, consist of a hollow bowl carefully trimmed of all vegetation. An entire system of leks is linked together by long tracks running more than 100 feet in any direction.

These leks serve as a convenient place from which they can court females. This courtship involves an exuberant display in which the male will inflate his chest, bob his head, and broadcast a massive sound throughout the night that can carry for half a mile in all directions on the wind. Males produce these sounds from a unique air sac in their thorax.

Once he attracts interest from a potential mate, the male will seal the deal with a brief courtship dance. After fulfilling his reproductive duty, he will depart the scene, leaving the female with the full responsibility for building the nest, incubating the eggs, and raising the chicks. The mother will produce only a few eggs, sometimes spaced months apart. After about 30 days of incubation, the chicks emerge from the eggs undeveloped and helpless (the technical term for this undeveloped state is altricial). As mentioned previously, the mother leaves the chicks untended for long periods of time to search for food. The chicks are most vulnerable at this point in their lives.

If they survive this initial stage, the chicks will leave the nest after about 3.5 months, when they grow their full feathers. The typical kakapo has a long lifespan of 45 to 60 years in the wild (though it’s been suggested that they might have a lifespan up to 100 years). The female reaches sexual maturity at around nine years of age and only reproduces once every two to four years on average, which may contribute to their slow population growth.

Once widespread across most of New Zealand, the kakapo began a rapid decline after the arrival of European settlers until it hit a low of around 50 or 60 individuals by the late 20th century. Only well-planned conservation efforts saved them from ultimate extinction. The remaining individuals were relocated to three offshore island sanctuaries, where they were free of predators. From this low population, conservationists have made some inroads to reviving the species. Today about 200 kakapos remain in the wild. But because of the low genetic diversity, modern kakapos have problems with disease resistance and infertility. DNA sequencing allows conservationists to construct a kakapo family tree to help minimize inbreeding.

View all 14 animals that start with K

Are Kakapos herbivores, carnivores, or omnivores?

What Kingdom do Kakapos belong to?

Kakapos belong to the Kingdom Animalia.

What class do Kakapos belong to?

Kakapos belong to the class Aves.

What phylum to Kakapos belong to?

Kakapos belong to the phylum Chordata.

What family do Kakapos belong to?

What order do Kakapos belong to?

Kakapos belong to the order Psittaciformes.

What type of covering do Kakapos have?

Kakapos are covered in Feathers.

What genus do Kakapos belong to?

Kakapos belong to the genus Strigops.

In what type of habitat do Kakapos live?

Kakapos live in areas of natural vegetation and dense jungles.

What is the main prey for Kakapos?

What are some predators of Kakapos?

Predators of Kakapos include humans, cats, and stoats.

Does the kakapo migrate?

No, the kakapo maintains a home range the entire year and only travels a short distance for the breeding season.

How many eggs does the kakapo lay?

No more than three per breeding season.

How fast does the kakapo fly?

The kakapo cannot fly, but it can traverse the ground at slower speeds.

What is the kakapo's wingspan?

It has reduced wings that measure no more than a few feet.

When do kakapo chicks leave the nest?

Yes, kakapo does all of their foraging at night.

What is a kakapo?

A kakapo is a large flightless bird that belongs to the family of New Zealand parrots. It can be argued that the kakapo’s unique adaptations make it different from any other species on the planet.

Where do kakapo live?

The kakapo once called home the entire island habitat of New Zealand. Now it is confined to three small islands: Codfish, Maud, and Little Barrier. Deliberately kept free of predators, these habitats offer a refuge for the kakapo to live and thrive. Although closely monitored and cared for, these birds are still technically wild in nature.

How many kakapos are left?

Population numbers fluctuate from year to year, but in 2019, after a particularly successful year of breeding, the kakapo surpassed 200 for the first time in many decades.

How many babies do Kakapos have?

The average number of babies a Kakapo has is 2.

What is an interesting fact about Kakapos?

The Kakapo is the heaviest species of parrot in the world!