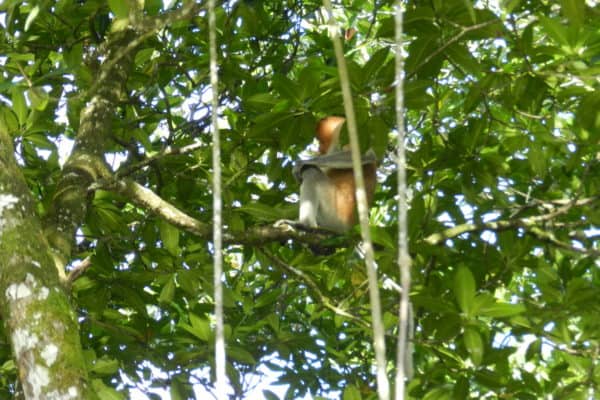 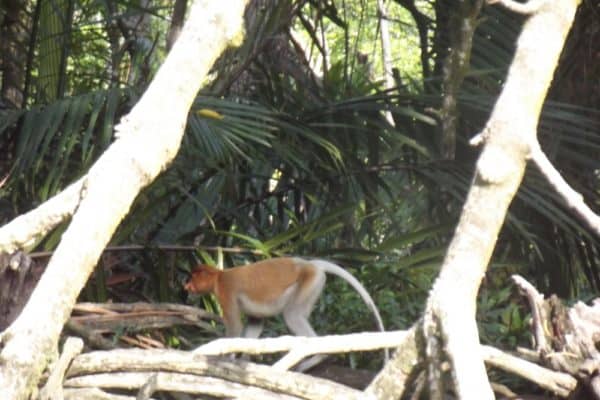 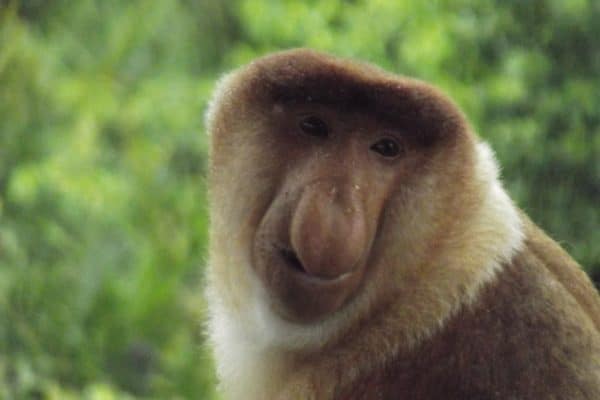 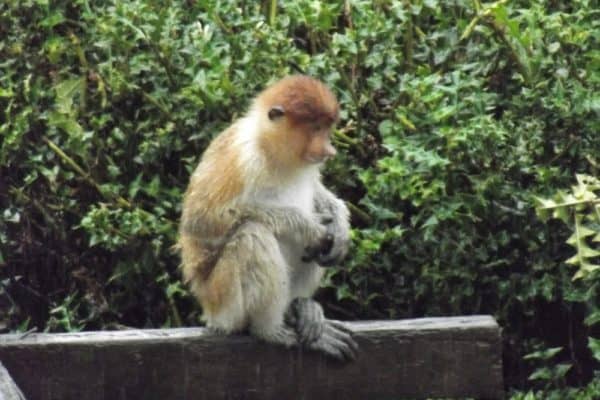 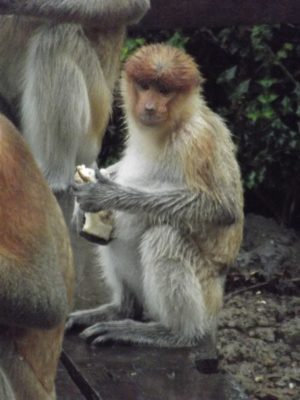 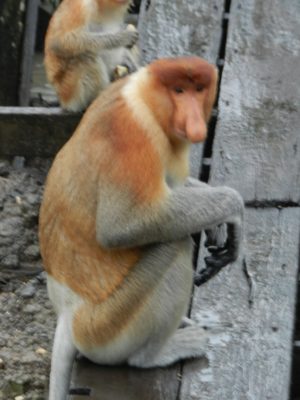 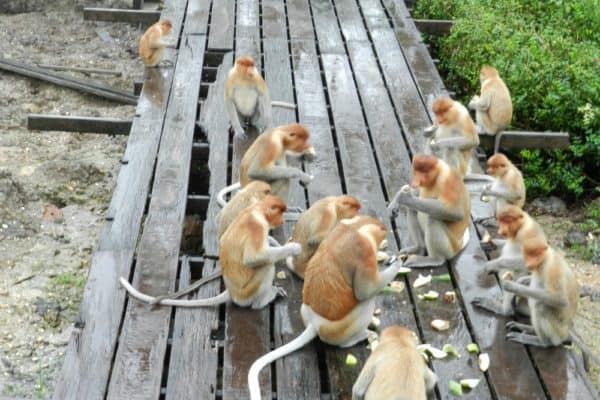 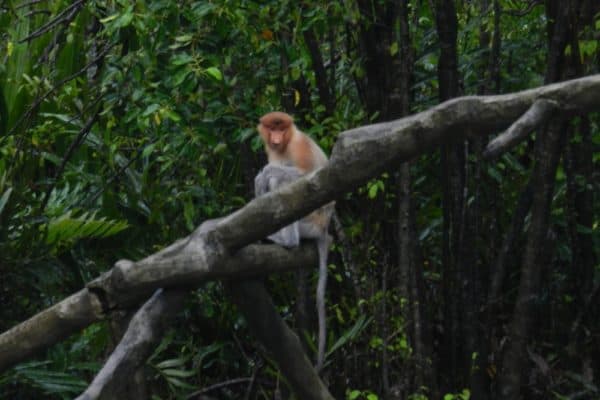 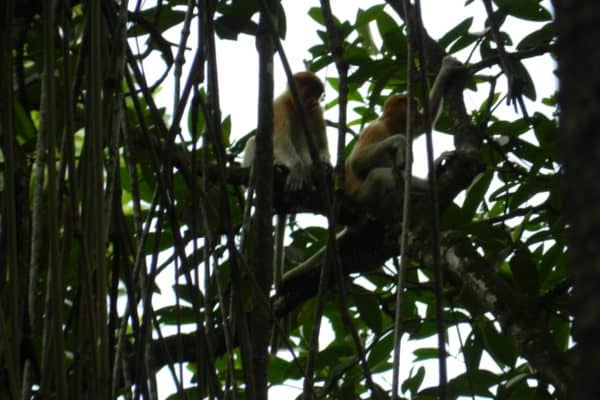 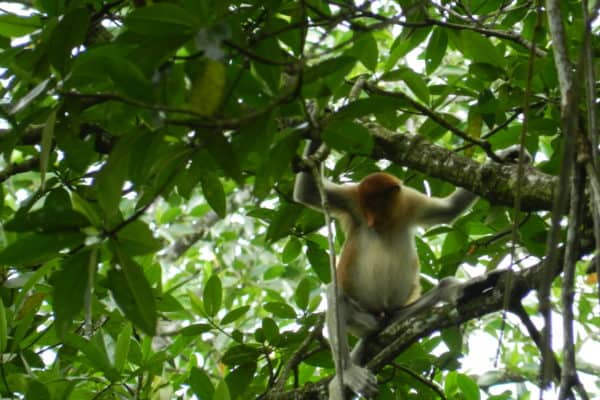 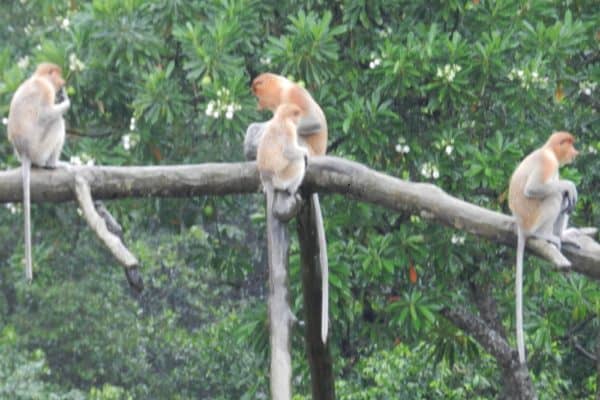 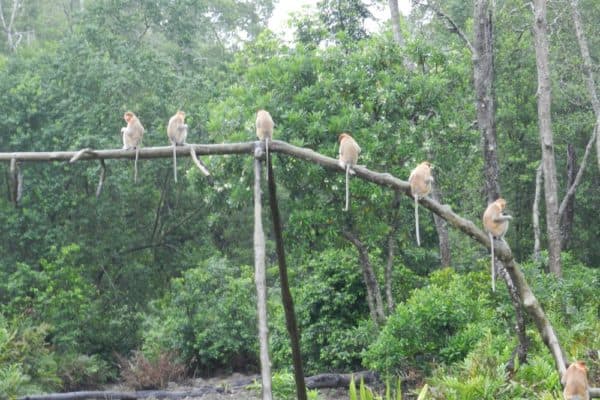 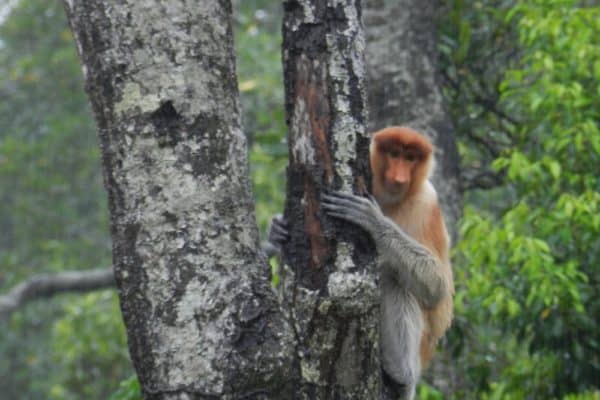 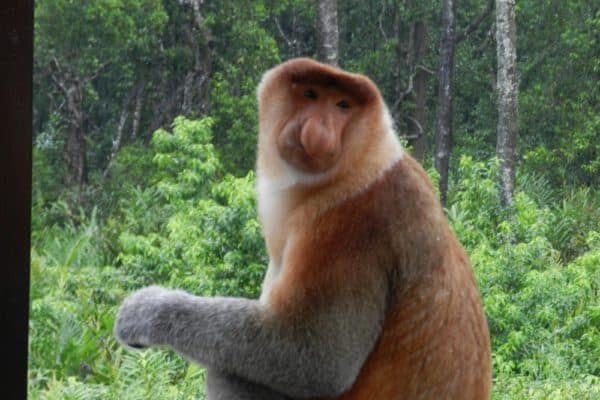 Natively found on the island of Borneo!

The male Proboscis Monkey is significantly larger than the female measuring up to 76cm in height and weighing more than 20kg, both having a long tail which can easily be the same length as the body, which is used to help the Proboscis Monkey to balance whilst it is leaping through the trees. Adults are mainly pale orange to light brown in colour with a richer coloured head and shoulders and grey limbs and tail, and a light pink face. The protruding nose of the Proboscis Monkey develops with age with infants having more monkey-like noses and older mature males having larger and more bulbous ones. Although scientists are still unsure as to exactly why the nose of the Proboscis Monkey grows so big, it widely believed to be to do with attracting a female mate as the noses of females are much smaller.

The Proboscis Monkey is natively found on the island of Borneo where it was once fairly widespread (with the exception of central Sarawak) throughout the coastal mangrove forests. The Proboscis Monkey inhabits very unique habitats and is most commonly found in mangrove swamps, but is also known to inhabit coastal mangroves, riverine forests and lowland rainforest providing that there is a good source of fresh water. Due to their leaf-eating diet, the Proboscis Monkey has also managed to exploit a niche within these wetland forests and are the largest mammals found inhabiting the higher levels of the canopy. These rare regions however, have been heavily affected by deforestation meaning that Proboscis Monkey populations are becoming more isolated as they will avoid cleared forest or populated areas.

The Proboscis Monkey is an incredibly sociable animal that inhabits the surrounding mangroves in troops that contain between 2 - 30 individuals and are comprised of a dominant male, with up to 10 females and their young. Female Proboscis Monkeys tend to lead the searches for food and care for the young and the male defends his troop by making loud honking sounds and showing his teeth. Proboscis Monkey troops are known to congregate together though when close to water or in an area where food is in abundance, along with at night when troops rest and sleep in the safety of the mangroves close to the water's edge. Due to the fact that the Proboscis Monkey requires a good fresh water supply such as a swamp or river, they are excellent swimmers and are known to travel across very deep areas to find food or to escape approaching danger.

Female Proboscis Monkeys give birth to a single infant after a gestation period that lasts for around five and a half months, which has dark coloured fur and a blue face and will not develop its adult colouration until it is 3 or 4 months old. Young Proboscis Monkeys are cared for not just by their mother but also by the other adult females in the troop, and will remain with their mother until they are nearly a year old when young females tend to stay with the troop and young males will leave to join a group of bachelor males. Although Proboscis Monkey troops tend to remain fairly stable, it is not uncommon for both males and females to move to another troop. Proboscis Monkeys tend to live for up to 20 years in the wild and are not able to reproduce until they are at least four years old.

Although the Proboscis Monkey is technically an omnivorous animal, the bulk of their diet is comprised of tough mangrove leaves which are pulled from the surrounding trees. It is because of the fact that they are leaf-eating monkeys, that the Proboscis Monkey has a large and swollen stomach that is made up of chambers containing a special cellulose digesting bacteria that helps to break down the leaves. This is however, a very slow process and means that the Proboscis Monkey's stomach is often full and can contain up to a quarter of the individual's total body weight. The Proboscis Monkey supplements its diet by eating other plant matter including shoots, seeds and unripe fruits along with a passing insect on occasion and does so predominantly in the trees, preferring not to come down to the ground.

Due to the large size and almost entirely tree-dwelling lifestyle of the Proboscis Monkey they have very few actual predators in their natural environment, with the exception of Clouded Leopards that hunt the Proboscis Monkey when it is forced to be on the ground. They are also preyed upon by Crocodiles whilst in the water but Humans are the biggest threat to this unique animal. Not only have Proboscis Monkeys lost vast areas of their natural habitats to deforestation but they have also not adapted well to living close to Human activity and are therefore being pushed into smaller and more isolated pockets of their native regions.

The Proboscis Monkey spends the majority of its life very close to water and is an adept swimmer, aided by its partially webbed feet which help it to both paddle in the water and walk on the slippery banks. The Proboscis Monkey is very agile whilst in the trees and is also known to leap into the water from heights of up to 50ft! The nose of the male Proboscis Monkey can grow so big that it hangs down over its mouth and has to be pushed aside to eat, however, when calling the nose straightens up and is thought to make the monkey's sound echo louder to both impress mature females and to intimidate rival males in the area. The large nose of the male Proboscis Monkey is also known to become red and swollen when the individual is either angry or excited.

The Proboscis Monkey was once hunted by local people as they are seen as a culinary delicacy in some areas, but today the capture and killing of these distinctive animals is forbidden and has helped this situation slightly. However, people have had a far bigger impact on the Proboscis Monkey through the deforestation of its natural habitat mainly for logging, growing Human settlements and to clear land for palm oil plantations, which has led to drastic population declines in the species over the past couple of decades particularly. They are however, of great fascination to many people around the world and have generated tourism interests in certain areas.

Today, the Proboscis Monkey is listed by the IUCN as an animal that is Endangered in its natural environment and could face extinction in the near future if better conservation measures are not put into place. Population numbers are thought to have dropped by up to 80% over the past 30 years with numbers continuing to decrease. There are thought to be around 7,000 Proboscis Monkeys left in the wild today and very few are found in captivity as they simply do not respond well to the artificial conditions.

How to say Proboscis Monkey in ...