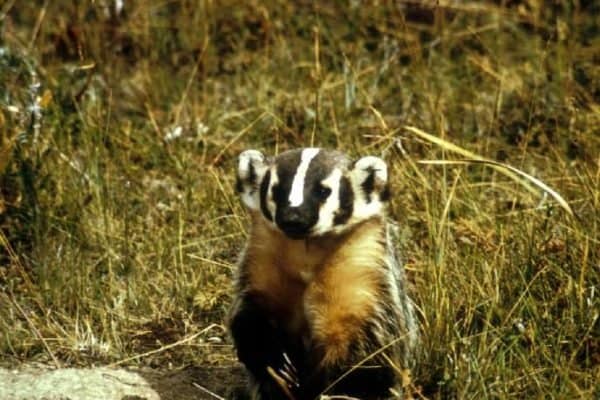 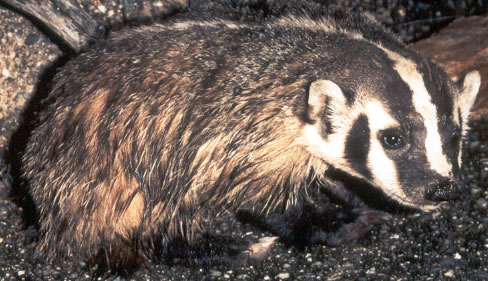 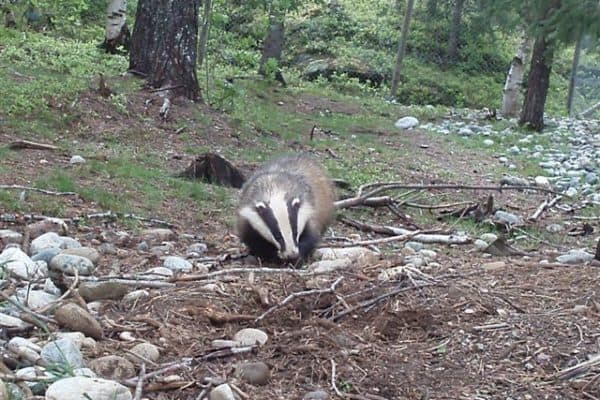 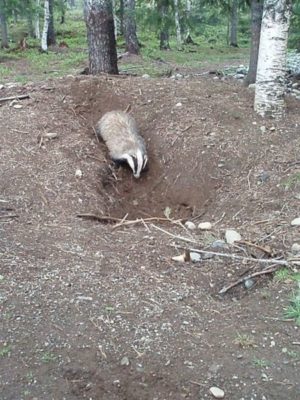 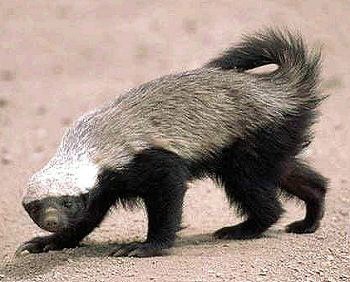 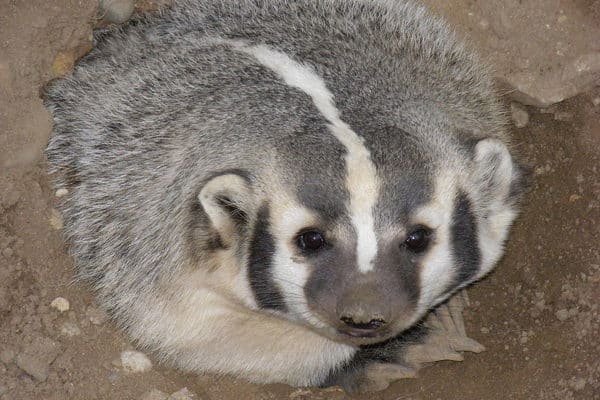 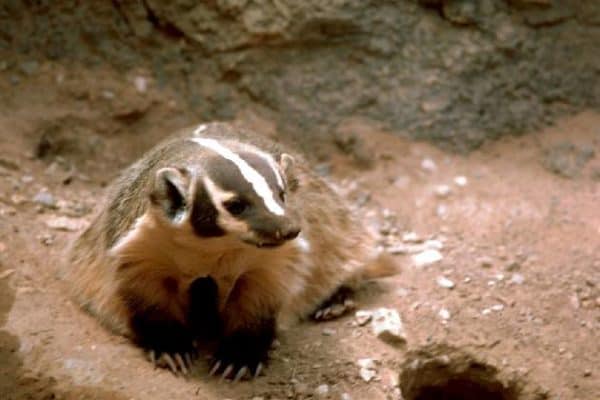 Badgers are especially clean animals that build communal toilets away from where they live and sleep.

Badgers are medium-sized mammals with long, low bodies and wide feet that have elongated claws. The animals have bristly hair that ranges in color from black to brown as well as gold and even white. Badgers are related to otters, ferrets, wolverines, minks and weasels. The mammals are nocturnal, and while many of them are social, some may be loners. The badger is Wisconsin’s state animal.

• Badgers sleep during the day

• There are 11 different badger species

• Badgers are a part of the weasel family

The scientific name for the badger is Taxidea Taxus, and it is included in the Mustelidae family and is of the Mammalia class. The badger’s subfamilies are Helictidinae, Melinae, Mellivorinae and Taxideinae. Researchers have classified 11 badger species that are grouped into three types. These are the Melinae, or Eurasian badgers, Mellivorinae, or honey badger, and Taxideinae or American badger.

The name “badger” comes from the 16th century word “bageard.” Originally, the name referred to the European badger, which is the animal that features a white mark on its forehead. Bauson is an outdated name for the animal. Brock is another old name for the animal species, but it’s hardly ever used.

Badgers have had a number of starring roles in British literature throughout the years. For instance, author Kenneth Grahame included a character by the name of “Mr. Badger” in “The Wind in the Willows.” C.S. Lewis added one in the “Chronicles of Narnia” and Beatrix Potter featured a badger by the name of “Tommy Brock” in her book “The Tale of Mr. Tod.”

The North American badger features short, stubby legs, a muscular body and a short neck. The animal’s head is wide and flat. Badgers also have a tail. They tend to have gray colored coats, darker faces and a white stripe that runs from their backs to their noses. The animal type measures about 9 inches high and is from around 16 inches to 29 inches long. A badger’s tail will vary in size from about 4 inches to 6 inches long or around one-third of the size of the actor Danny DeVito. They weigh from 20 pounds to 24 pounds. The lower jaw of the badger is pronounced from its upper jaw. This means that it’s basically impossible to dislocate the animal’s jaw, allowing it to maintain a solid hold on its prey. However, the jaw positioning limits movement. A badger can open and shut its mouth or shift it from side to side.

Badgers are mainly nocturnal, and in the winter, they spend most of their time underground. During this time, they fast. To survive long periods without eating, the animal builds up a good deal of fat late in the summer and toward the fall.

Each badger family tends to behave uniquely, but all types of badgers live underground. Some live together in clans known as cete. These vary in size from two animals to as many as 15. Badgers have the capacity to run, reaching speeds of 16 miles per hour to 19 miles per hour for short spurts. The animals are good climbers, and they can swim.

Badgers are famous for their ferocity. If a female adult badger has babies to protect, then she’ll guard them aggressively. There are accounts of badgers fighting off packs of dogs and attacking much larger animals than themselves like bears and wolves. Badgers may show aggression toward humans if they feel threatened. The animal can deliver a painful bite to protect itself.

The animal species is territorial, and they’ll protect territories that measure around 3 to 4 square miles. The size of a badger’s territory generally depends on how plentiful the food is. Badgers are extremely clean animals that do not defecate in their burrows. In fact, they build shallow pits away from their home for this purpose. Badgers don’t bring food into their burrows either.

American badgers generally live in grassland areas as well as in open fields that feature grassland characteristics. They live in parks, on farms and in spaces that are free of trees. Badgers make their homes in areas that include a healthy rodent supply. You might come across them in mountain meadows, forest glades and marshes. They’ve also been found in hot desert environments and brushy areas. People have run into badgers at elevations that are as high as 12,000 feet, but the animal prefers to live at lower elevations.

In California, badgers live in agricultural areas and in open spaces. They also make their homes in regional, state and national parks. Badgers that live in Arizona usually live in the semi-desert grasslands and scrub areas. In Ontario, they live on the province’s far southwestern side.

The animal’s use of a home area depends upon the season and whether it’s a male or a female badger. The creatures use some areas of their home range more often based on the different seasons. The areas that they use are also based on the prey that they have available. Male badgers usually have larger home spaces than female badgers.

The animal species needs shelter for sleeping, protection from the elements, concealment and birthing. Badgers frequently increase the size of a gopher hole or of a burrow made by another animal for their own use. When a badger builds or appropriates another animal’s burrow, it may be called a sett. The animal’s dens vary in size from around 4 feet to 10 feet deep and 4 feet to 6 feet wide. Female badgers may form two to four burrows close to a connecting tunnel for shelter and protection for her babies. A common sign of a badger den is evacuated soil at the front of the burrow entrance. If you were to look at it from a distance, you would see a mound-like burrow roof with the living space below.

In the summer and fall, badgers range more often. Also, according to burrowing patterns, the animals may dig anywhere from one to three burrows out of prey holes each day. Badgers will use these for a day to a week before abandoning them temporarily and returning to them later. Other wildlife may take advantage of these empty badger burrows. If prey is abundant, then badgers will reuse burrows, especially during the fall. Sometimes, the animals remain in these dens for several days. When winter arrives, badgers will hole up in a burrow for the majority of the season.

Badgers have different types of setts. However, their main one is the largest. These can be several hundred years old. They can also have a few hundred entrances.

Badgers are omnivores that prey mainly on pocket gophers, prairie dogs, ground squirrels and moles. They also eat deer mice and voles along with snakes. The American badger is a major predator of snakes and will even go after rattlesnakes. Badgers may also dine on ground-nesting birds like the bank swallow or the sand martin. They’ll eat lizards, fish and insects. The animal will eat some plant foods like green beans, corn, mushrooms and sunflower seeds. Badgers have been known to experience alcohol intoxication from eating rotten fruit.

Badgers are aggressive creatures, which means that the animals have only a few natural predators. These include coyotes, bobcats, golden eagles and bears. Research shows that cougars hunt them the most. Humans trap them for their pelts. Badger fur is used for paint brushes and shaving brushes.

Humans also hunt them in a number of countries. In fact, the Dachshund dog breed exists because people bred them to hunt badgers. In the past, baiting was popular in England. Fortunately, opposition to the sport led to the passing of the Cruelty to Animals Act of 1835 in addition to the Protection of Badgers Act of 1992. For additional protection, the country passed the Hunting Act of 2004.

In Britain, people ate badgers during World War II. Early American settlers and Native Americans ate them too. Today, European badgers die from starvation and tuberculosis, but more of them are killed by vehicles than by any other way.

Mating season is usually in early spring or toward the end of summer. The animals will often mate near the burrows or inside the entrance. Badgers experience delayed implantation. Early embryos implant near the end of December or the first week or two of January. After becoming pregnant, a female badger will dig a natal den, which she’ll use for an extended time. Baby cubs are born after 8 weeks to 10 weeks, and this typically happens in late April or during the first part of May. These cubs feature soft, gray fur, and they are careful and shy. After the babies are born, the female badger may move her litter to look for food in other areas. A natal den will typically be bigger and more intricate than a regular badger den.

Male European badgers are called boars while females are sows. Babies are known as cubs. In North America, baby badgers are called kits. Male and female are the terms used for adult badgers in North America. Female badgers give birth to anywhere from one to five cubs. Female badgers take care of their litter alone, and the babies will stay in the burrow until they are around 8 weeks old. Once baby badgers are around 4 months old, they are able to hunt their own food. At 6 months old, young badgers leave their mother’s burrow.

In the wild, the average lifespan of badgers is from 4 years old to 10 years old. They can live for as long as 14 years. When the animals are in captivity, they can live to be 26 years old.

The International Union for Conservation of Nature reports that most types of badgers are not considered threatened or endangered. The population of the American badger is several hundred thousand. However, the hog badger is close to threatened because the animal’s population has declined by just under 30% within three generations. The species is highly threatened in China, Vietnam, Laos and Myanmar. In England and Wales, the population is around 485,000, which means that the species is not in danger there at this time.

View all 70 animals that start with B

Are Badgers Carnivores, Herbivores or Omnivores?

Badgers are omnivores, so they eat both mammals and plants.

Badger attacks on humans rarely occur, but they happen occasionally. When a person attempts to hold or trap a badger, the animal will defend itself with its claws and teeth. It is a good idea to give a badger plenty of space if you should run into one.

Can Badgers Be Pets?

People have been known to keep badgers as pets. If someone adopts a badger from when it is a baby, then the animal can become acclimated to life as a pet. But, they don’t make the easiest pets. Badgers are natural diggers and can be highly destructive.

Badgers belong to the weasel family, which includes skunks, wolverines and otters. However, they are often mistaken for rodents because of the shape of their bodies and the formation of their heads.