The fastest land mammal in the world!

The Cheetah is a large and powerful feline that was once found throughout Africa and Asia and even in parts of Europe. Today however, it is found in only a few remote regions of its once vast natural range, primarily due to growing Human settlements and the hunting of them for their fur. There are widely considered to be five different subspecies of Cheetah that vary only very slightly in colouration and are most easily distinguished by their geographic location. Although they are not considered to be part of the ‘big cat’ family as they cannot roar, Cheetahs are one of Africa‘s most powerful predators and are most renowned for their immense speed when in a chase. Capable of reaching speeds of more than 60mph for short periods of time, the Cheetah is the fastest land mammal in the world. Learn about the world’s fastest animals here.

The Cheetah is an animal that has a long and slender body that is covered in coarse yellowish fur and dotted with small black spots. Its long tail helps with balance and changing direction quickly and unlike the rest of the Cheetah’s body, there are ringed markings along the tail which ends in a black tip. Cheetahs have small heads with high set eyes that aid them when surveying the surrounding grasslands for potential prey. They also have distinctive black “tear marks” that run from the inner eye, along their nose and down to the outside of their mouths, which are thought to help protect them from being blinded by the bright sun. The exceptional speed of the Cheetah is caused by a number of things including having strong and powerful hind legs, and an incredibly flexible and muscular spine which allows the Cheetah to not only sprint quickly but also makes them very agile. They also have non-retractable claws which dig into the ground, giving the Cheetah better grip at high speed.

The Cheetah is an animal that once had a vast historical range that stretched across a number of continents, but their distribution today is much more scattered with a small number found in Iran and the majority found in sub-Saharan Africa. Although Cheetahs are still found in a few different parts of eastern and southern Africa, the highest population of wild Cheetahs is now found in Namibia in south-western Africa. Cheetahs are most commonly found stalking prey on the vast, open grasslands but they are also found in a variety of other habitats as well including deserts, dense vegetation and mountainous terrain, providing that there are both adequate supplies of food and water. Cheetahs are one of Africa’s most vulnerable felines with population numbers being mainly affected by growing Human settlements that encroach on their native habitats.

The Cheetah is unique amongst Africa’s felines primarily because they are most active during the day, which avoids competition for food from other large predators like Lions and Hyenas that hunt during the cooler night. They are also one of the more sociable Cat species with males often roaming in small groups, generally with their siblings, and oddly enough, it is the females that are more solitary animals apart from the 18 months or so that they spend looking after their cubs. Cheetahs are fiercely territorial animals that patrol large home ranges and often overlap those of other Cheetahs, and indeed Lions, with females tending to roam across a much larger range than males. They are typically shy and very stealthy animals so that they are able to hunt for prey in the hot daylight hours without being spotted so easily.

After a gestation period that lasts for around 3 months, the female Cheetah gives birth to between two and five cubs that are born blind and incredibly vulnerable in the African wilderness. The cubs suckle from their mother for the first few months when they begin eating meat, and start to accompany her on hunting trips as they are able to learn how to hunt from watching her. Cheetah cubs learn the majority of their hunting techniques through playing with their siblings, and remain with their mother until they can hunt successfully and leave to find their own territory at between 18 months and 2 years old. Sadly, one of the main reasons for such drastic declines in Cheetah numbers is that up to 75% of Cheetah cubs don’t live to be older than 3 months, as their mother has to leave them every day to find food to feed them, leaving the vulnerable cubs helpless in the face of predators.

The Cheetah has exceptional eyesight and so hunts using sight by first stalking its prey (from between 10 to 30 meters away), and then chasing it when the time is right. Cheetahs often kill their prey in vast open spaces but tend to drag it into a hiding place to prevent it from being scavenged by other animals. The Cheetah has to do this as it cannot eat its prey straight away, due to the fact that they are immensely hot after the chase and need time to cool down before they can feast. Cheetahs are carnivorous animals meaning that they only hunt and kill other animals in order to get the nutrition that they need to survive. They mainly hunt large herbivores including Gazelle and a number of large Antelope species such as Wildebeest, along with Zebras and smaller mammals like Hares. The exact diet of the Cheetah though tends to depend on its location.

The adult Cheetah is a dominant predator in its environment and is therefore not seen as prey (more as competition) by other large predators. The Cheetah cubs however, are incredibly vulnerable particularly when their mother is off hunting, and are preyed upon by a number of animals including Lions and Hyenas, but also large avian species such as Eagles and Vultures. The biggest threat to Cheetahs is people, who have not only taken vast areas of its natural habitat for themselves, but have also turned large regions of land into National Parks. Although these areas seem to be showing increases in both Lion and Hyena populations, Cheetah numbers are much lower as there is more competition for food with the increasing numbers of these other large predators.

One of the most distinctive differences between the different subspecies is that their fur colour changes slightly, depending on their surrounding environment. Those Cheetahs found in the more arid desert regions tend to be lighter and have smaller spots than the King Cheetahs that roam the south African grasslands, and are darker, slightly bigger and have larger spots. Although Cheetahs cannot roar, they do make a variety of different sounds including a high-pitched yelp which can be heard for more than a mile away. The Cheetah is one of the most distinctive of the world’s felines and although it is fairly commonly confused with the Leopard, its name is thought to have come from the Hindu word ‘chita’ which means the ‘spotted one’.

Despite their fierce appearance, Cheetahs have actually been domesticated by local people for thousands of years, as they were used to help with hunting for food for the villagers. They have also been kept in captivity for a long time, but as they do not seem to produce particularly healthy individuals, wild Cheetahs were regularly caught to restore the bloodline. Hunted by people as trophies throughout much of their natural range, Cheetahs have completely disappeared from numerous places and along with habitat loss to growing Human settlements and the clearing of land for agriculture, Cheetah numbers are still declining rapidly in many areas today.

Today, the Cheetah has been listed by the IUCN as a species that is Vulnerable from extinction in its natural environment in the near future. Habitat loss along with the increase of natural parks that are home to a large number of competing predators has led to drastic declines in the world’s Cheetah population. There are now estimated to be between 7,000 and 10,000 individuals left in the wild, along with a growing number being found in zoos and animal institutes all over the world.

View all 74 animals that start with C Click through all of our Cheetah images in the gallery. 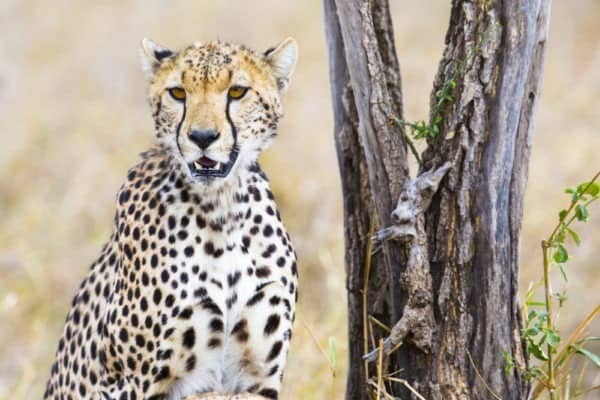 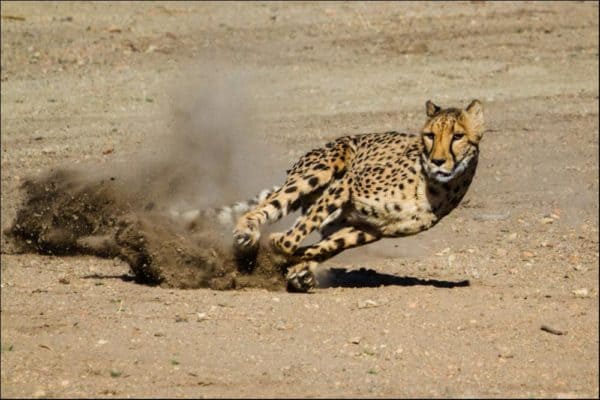 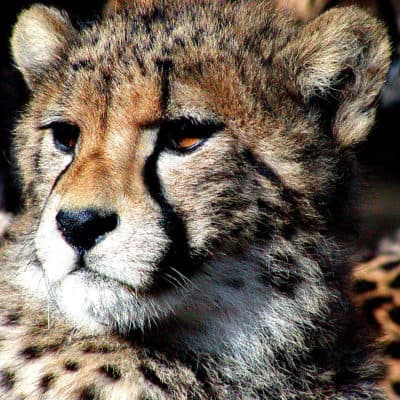 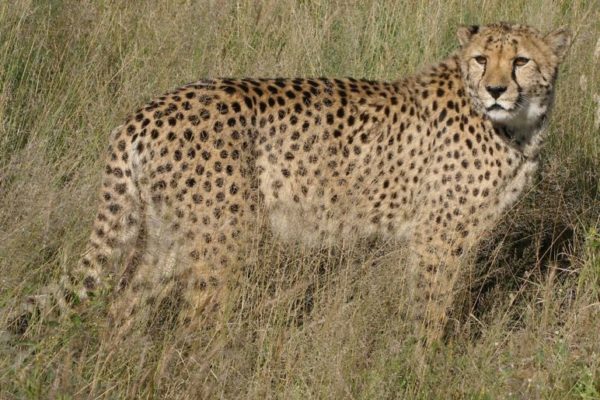 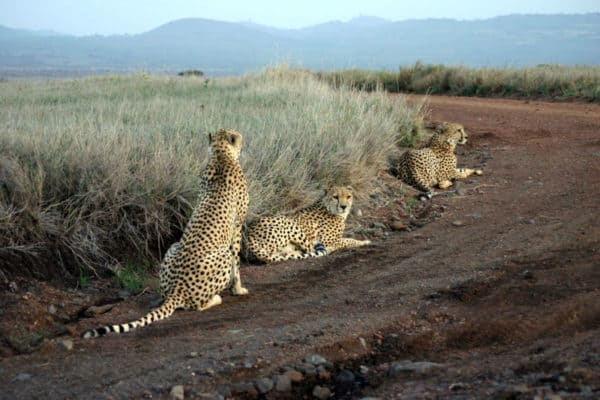 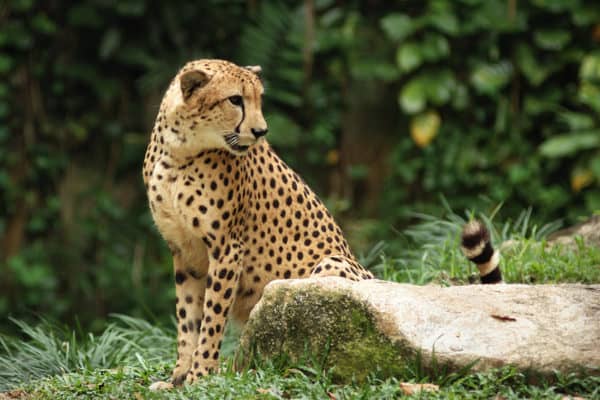 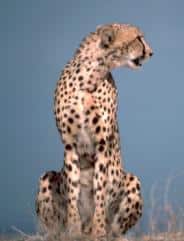 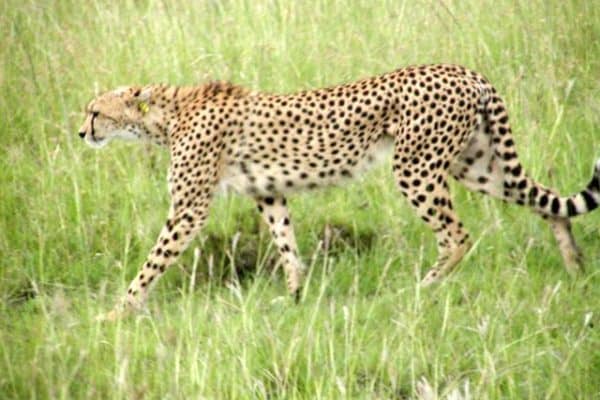 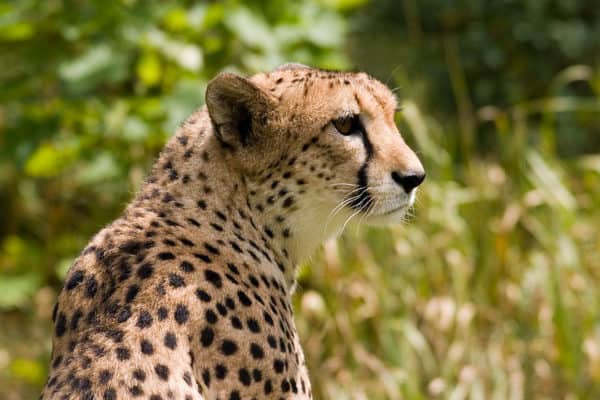 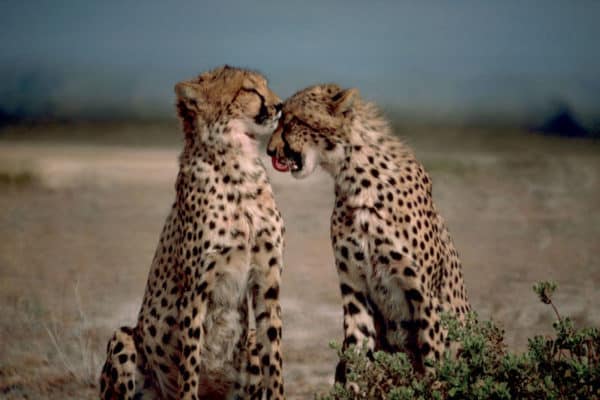 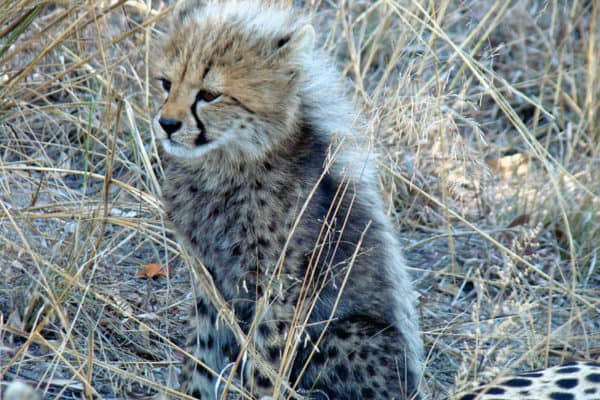 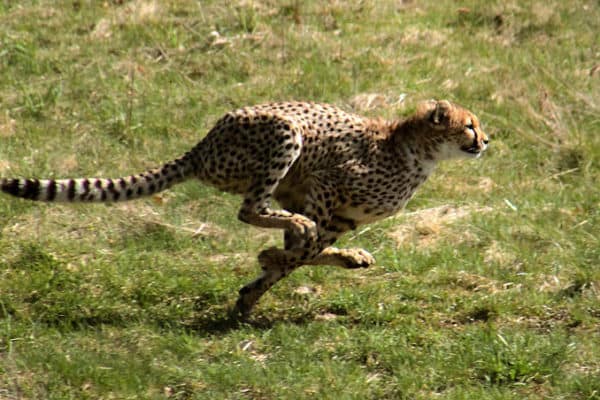 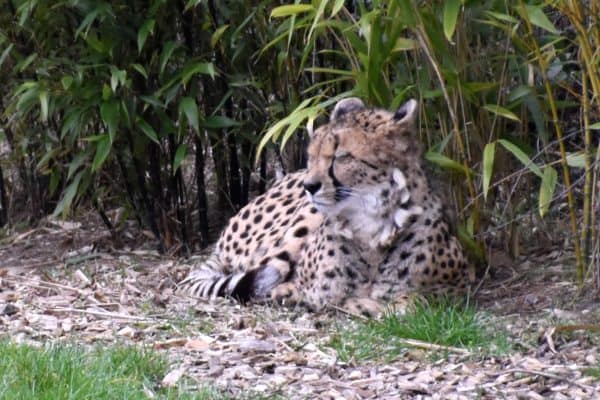 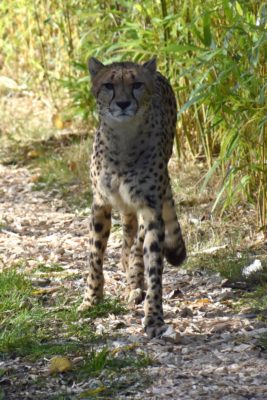 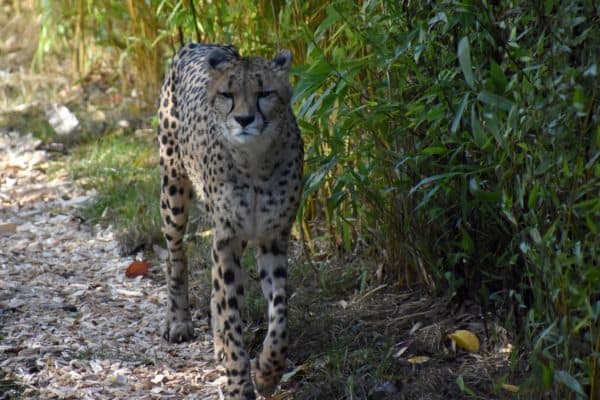 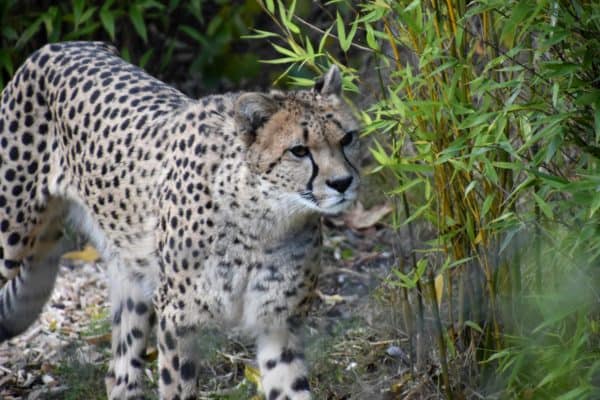 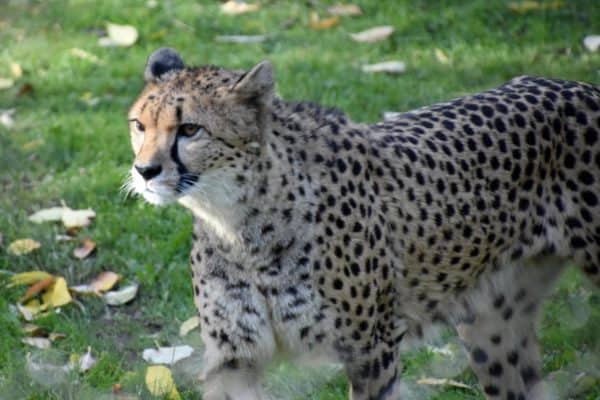 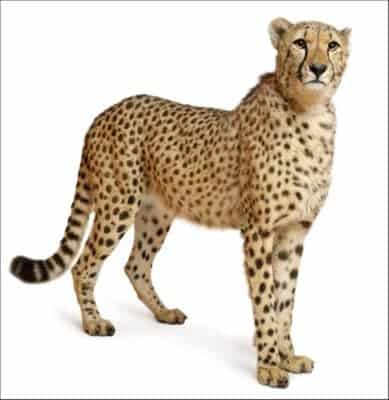 View all of the Cheetah images!

Are Cheetahs herbivores, carnivores, or omnivores?

Cheetahs are Carnivores, meaning they eat other animals.

What Kingdom do Cheetahs belong to?

Cheetahs belong to the Kingdom Animalia.

What phylum do Cheetahs belong to?

Cheetahs belong to the phylum Chordata.

What class do Cheetahs belong to?

Cheetahs belong to the class Mammalia.

What family do Cheetahs belong to?

Cheetahs belong to the family Felidae.

What order do Cheetahs belong to?

Cheetahs belong to the order Carnivora.

What genus do Cheetahs belong to?

Cheetahs belong to the genus Acinonyx.

What type of covering do Cheetahs have?

Cheetahs are covered in Fur.

Where do Cheetahs live?

Cheetahs live in Asia and Africa.

In what type of habitat do Cheetahs live?

What are some predators of Cheetahs?

Predators of Cheetahs include humans, lions, and eagles.

What is the average litter size for a Cheetah?

The average litter size for a Cheetah is 3.

What is an interesting fact about Cheetahs?

The Cheetah is the fastest land mammal in the world!

What is the scientific name for the Cheetah?

The scientific name for the Cheetah is Acinonyx jubatus.

What is the lifespan of a Cheetah?

What is a baby Cheetah called?

A baby Cheetah is called a cub.

How many species of Cheetah are there?

There are 5 species of Cheetah.

What is the biggest threat to the Cheetah?

The biggest threat to the Cheetah is habitat loss.

How many Cheetahs are left in the world?

How fast is a Cheetah?

A Cheetah can travel at speeds of up to 70 miles per hour.