Many jellyfish can produce their light. Click through all of our Jellyfish images in the gallery. 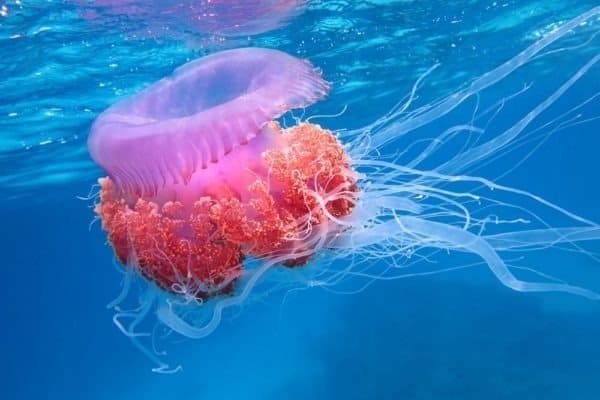 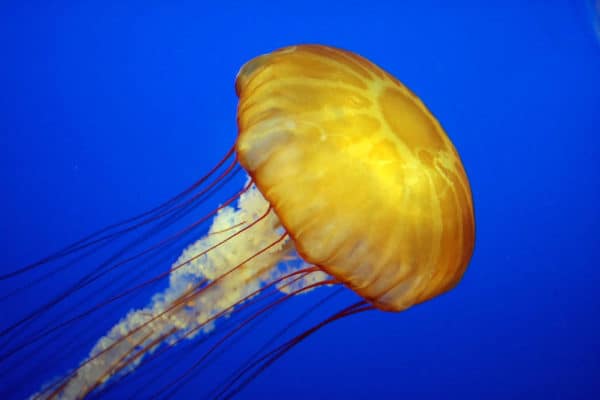 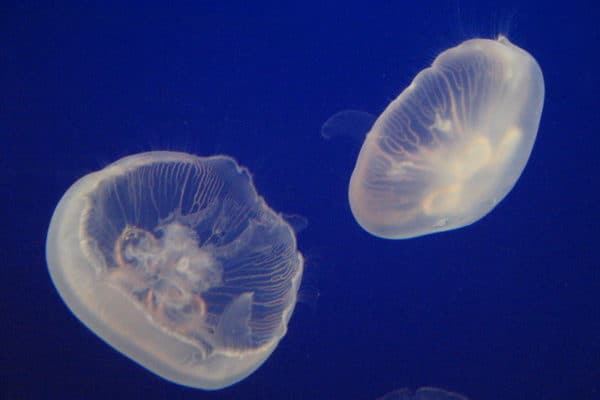 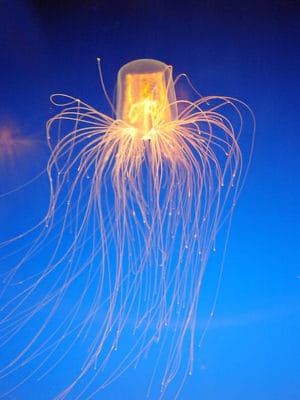 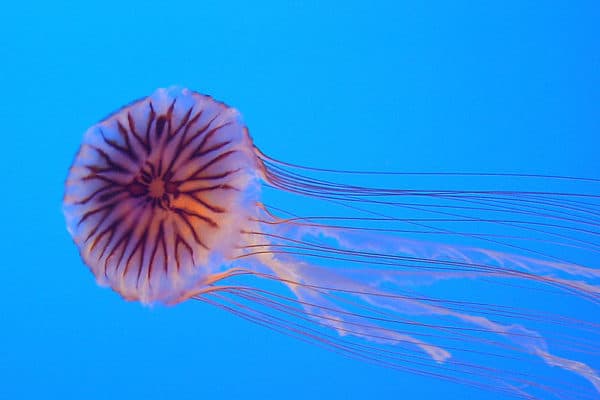 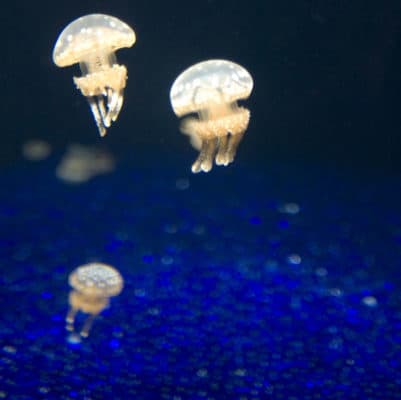 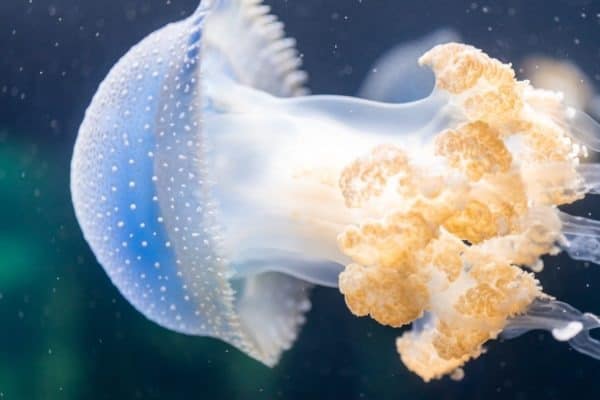 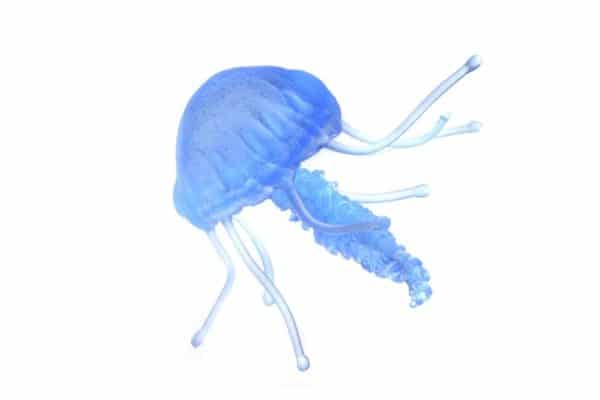 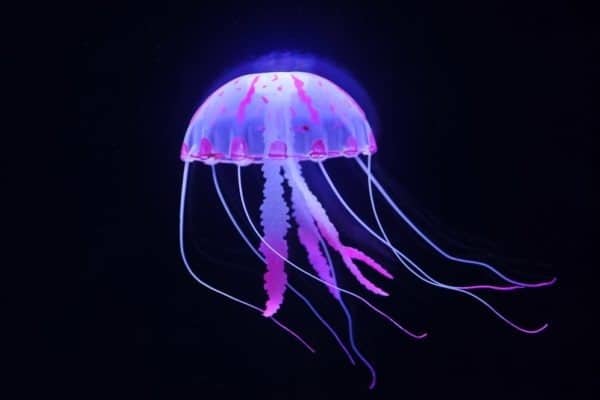 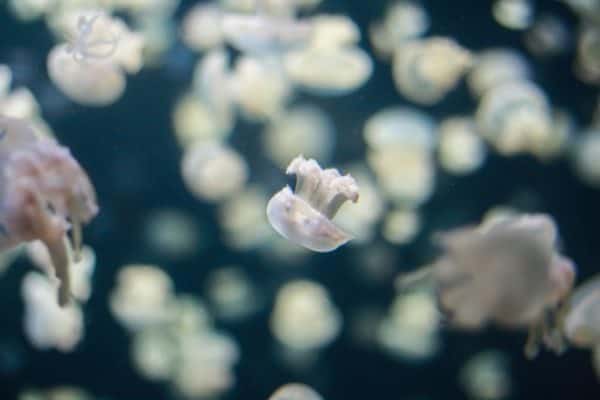 View all of the Jellyfish images!

Jellyfish are prehistoric marine creatures and have been known to exist in oceans for the past millions of years.

Though they are not usually aggressive, these fish are famous for their ability to sting, allowing them to defend themselves against any sort of danger.

These fish use their tentacles for hunting. However, they do not have any bones, heart, or most other organs. Interestingly, their bodies are mostly made up of water.

They have a lifespan of about three to six months and can grow up to 7 feet in size.

Do Jellyfish Have Brains?

As beautiful as these sea creatures are, they don’t actually have a brain. Instead, the body is made up of a complex nervous system, which is where all of their motor functions and sensory activity occurs. Through the neurons in this system, the body tells the muscles when to contract, which is how they swim.

These animals go by the scientific name Scyphozoa and belong to the kingdom Animalia and phylum Cnidaria. Scyphozoa comes from two Greek words – skuphos and zōion. While skuphos means “drinking cup,” the word zōion means “animal.” The name is an interpretation to mean that this animal contains water. The phylum cnidaria is interesting as well since it comes from the modern Latin word knidē, which means “nettle.”

Jellyfish form a large family of planktonic creatures, and recent studies show that there are at least 4,000 that have already been discovered. Considering the vastness of the oceans, scientists believe that this number is barely a fraction of what is actually in the sea.

Even with all of these species around the world, only 70 are considered to be a threat to humans. Some of those dangerous species include the Malo kingi and the Chironex Fleckeri, which are both in the box jellyfish family. The venom is potent and painful enough to kill.

There are some types that are even kept as pets, primarily for their inability to sting their owner. The most common jellyfish to keep as a pet is the moon jellyfish, which lives for about 15 months.

Turritopsis dohrnii that is also called the Immortal jellyfish is a small and transparent jellyfish and can interestingly reverse to earlier stages of their lives. This transition can take the animal back to the state that the jellyfish was in as a fertilized egg when it settles on the seafloor at old age.

Some of these animals are transparent while others exist in bright colors like yellow, blue, and pink. These fish are bioluminescent which means that they produce their light.

Their bodies may look complex due to the way they look but they are quite simple. Jellyfish have a smooth body with tentacles that contain tiny cells that can be used when they use their stinging capabilities.

They have no bones, brains, heart, or eyes. Their mouths are found in the center of their bodies. They are usually about 0.5 to 16 inches and can grow up to 7 feet and usually weigh around 440 pounds.

Though these tentacles are controlled by the nervous system, the sting is rarely fatal. Most box jellyfish have strong enough venom to execute the victim. The purpose of the tentacles is to stop the movement of its prey, though they are also used as a way to defend the animal.

They are found across the globe and can be found in every ocean on the planet. Many species choose to live in warm tropical waters or cold Arctic waters. They can exist at the bottom of the oceans as well as on the water surfaces, making them incredibly versatile.

Though the specific areas may vary, every species must live in saltwater to thrive. As of 1990, there were 900 million tons of jellyfish in the Black Sea alone.

Even with this ability to survive in so many locations, pollution is a big threat to every species. Oil spills and dumping chemicals in the water can easily absorb into their skin, which makes it impossible for them to reproduce. Though the pollution doesn’t always kill them instantly, most species will not live nearly as long once they are exposed.

These animals face threats from various sea and land creatures including sea anemones, swordfish, sea turtles, tuna, and penguins. When the jellyfish get washed up on beaches, they are usually found and eaten by foxes and other birds and animals. If humans manage to catch them, it isn’t uncommon to cook it as a delicacy.

These fish in turn feed on many different things like planktonic eggs, small plants, small fish and larvae, fish eggs, and other small marine animals.

The Sting of the Jellyfish

These animals have tentacles that are armed with tiny sting cells that the fish use on their prey or when they sense danger. They often use their stinging characteristics to defend themselves and use their tentacles to inject venom into other creatures.

The stings can cause pain and irritation and can sometimes also result in whole-body illness. Some stings can even be life-threatening.

These animals are known to reproduce both sexually and asexually. While one of the species reproduces sexually, some other types reproduce asexually. However, for both the processes, the fertilized eggs settle on the seafloor after developing into a multi-cellular planula.

While most jellyfish live only about three to six months, some live longer and can survive for two to three years. After all, the immortal jellyfish never technically dies. Instead, it eventually settles on the seafloor and contributes to the birth of a younger jellyfish from its own DNA. Essentially, it creates a clone of itself without ever technically “dying.”

Jellyfish in Fishing and Cooking

Jellyfish can be caught and eaten. More than twelve species are edible and are savored around the globe as delicacies. These fish are a rich source of protein and fatty acids.

One popular recipe is sesame jellyfish, which pairs the fish with soy sauce, vinegar, sesame oil, and sometimes chili oil.

View all 10 animals that start with J

Where are jellyfish found?

Jellyfish are found in the warm tropical and cold Arctic waters around the globe.

Do jellyfish have brains?

One of the most interesting characteristics of the jellyfish is that the animal does not have a brain. Besides that, they do not have a heart, bones, and eyes too.

What is a group of jellyfish called?

The group of jellyfish is called a smack.

How do jellyfish reproduce?

Some species of jellyfish reproduce sexually while others reproduce asexually.

How long do jellyfish live?

Jellyfish usually live for only about three to six months. However, some types can live for two to three years and some others are even immortal.

What Kingdom do Jellyfish belong to?

Jellyfish belong to the Kingdom Animalia.

What class do Jellyfish belong to?

Jellyfish belong to the class Scyphozoa.

What phylum to Jellyfish belong to?

Jellyfish belong to the phylum Cnidaria.

What family do Jellyfish belong to?

Jellyfish belong to the family Cyaneidae.

What order do Jellyfish belong to?

Jellyfish belong to the order Semaeostomeae.

What type of covering do Jellyfish have?

Jellyfish are covered in Smooth skin.

What are some predators of Jellyfish?

Predators of Jellyfish include sharks, birds, tuna, and sea anemone.

How many babies do Jellyfish have?

The average number of babies a Jellyfish has is 100.

What is an interesting fact about Jellyfish?

Jellyfish have tentacles around their mouths!

What is a distinguishing feature of the Jellyfish?

Jellyfish have tentacles hanging from their bodies.

What is the biggest threat to the Jellyfish?

The biggest threats to the Jellyfish are sharks, birds, tuna, and sea anemone.

How many Jellyfish are left in the world?

How fast is a Jellyfish?

A Jellyfish can travel at speeds of up to 5 miles per hour.