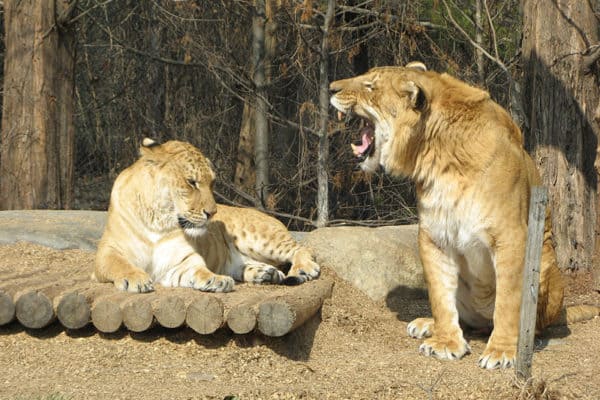 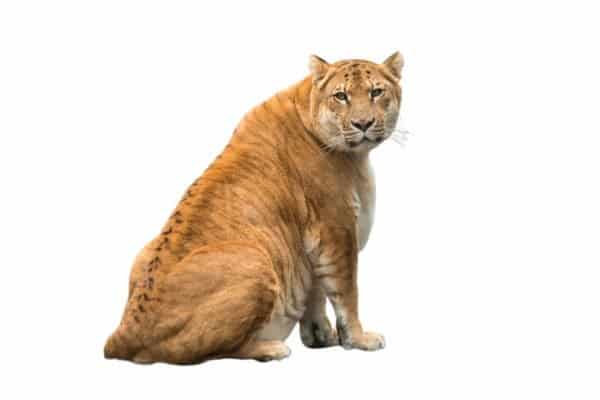 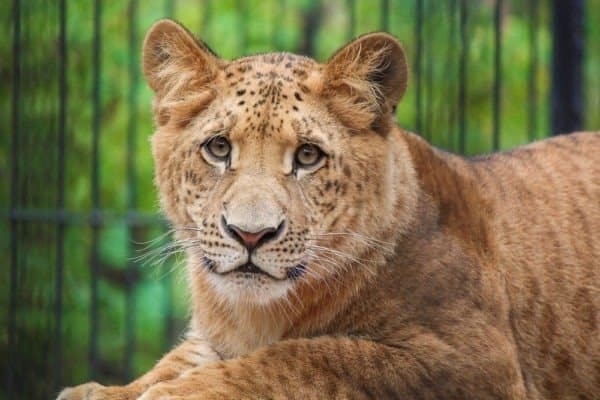 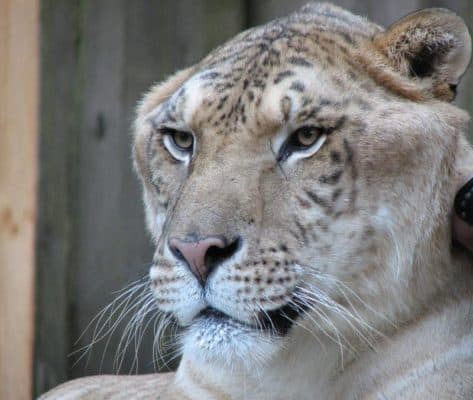 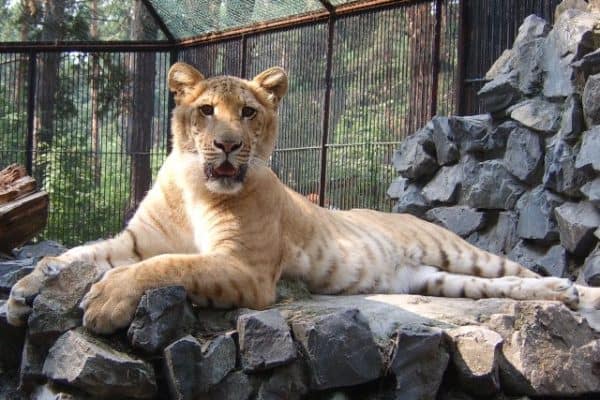 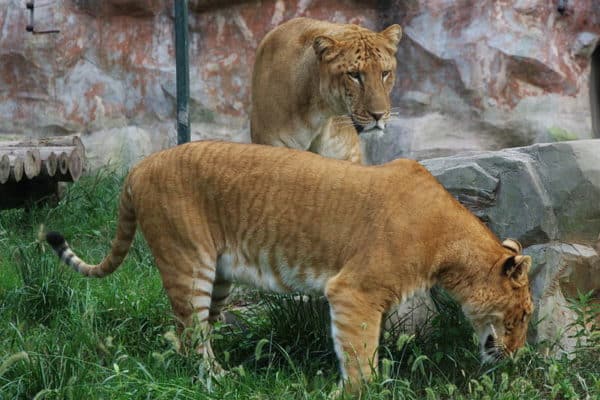 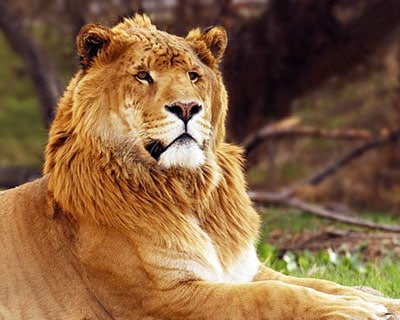 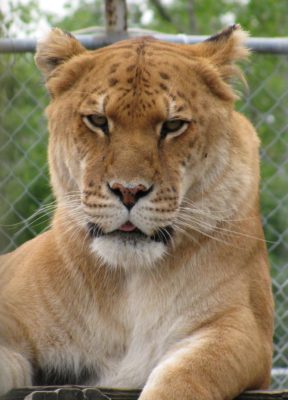 The offspring of a lion and tiger parents!

The Liger is the largest of the world's felines, known to grow up to 12ft tall when standing on their hind legs. Created by the mating of a male Lion with a female Tiger, Ligers tend to far exceed the size of both of their parents and although they share similar characteristics with both of them, the Liger tends to be more like a Lion rather than a Tiger. A Tigon is the result of breeding a female Lion with a male Tiger, with this animal tending to be less like a Lion having more Tiger-like qualities. Due to the fact though that Lions and Tigers live in different areas of the world, it is very unlikely that Ligers (or Tigons) would occur naturally in the wild. Today there are a handful of Ligers found in zoos around the world, which are a result of either accidental or deliberate Human intervention.

The Liger is an enormous animal with a large muscular body and broad head. Ligers tend to have sandy or dark yellow fur which is covered in the distinctive faint stripes inherited from their mother. Although other variations in fur colour have been known (including white when their mother is a White Tiger), the Liger generally has a more Lion-like appearance including the manes of the males. Although a Liger's mane is not as big or as impressive as that of an adult Lion, they can grow quite large on some individuals but it is not uncommon for a male Liger to have no mane at all. Along with their stripes which tend to be most noticeable around their hind quarters, the Liger may also inherit the spots found on the backs of Tiger's ears along with the tufted fur around their chins.

Historically it could have been possible although rare, for a male Lion to mate with a female Tiger in the wild to produce Liger offspring. This is because the Asiatic Lion once roamed across a much larger portion of Asia meaning that they could have more easily wandered into a Tiger's territory. Today however, Tigers are only found in the dense jungles of Asia where they are being pushed into smaller and smaller pockets of their natural habitat. Lions on the other hand, are found patrolling the African grasslands with the exception of the few remaining Asiatic Lions, who are found in a remote forest in India where there are no Tigers. Sadly, although the natural habitat of the Liger would probably be fairly similar to that of a Tiger, the world's only known Ligers are found in caged enclosures.

Despite their gigantic size and the fact that their parents are two of the planet's most ferocious predators, the Liger is known to have a relatively gentle and docile nature particularly when interacting with handlers. They have however been reported to be slightly confused as to whether or not they are Lions or Tigers as their most bewildering characteristic is the fact that they seem to love water. In the wild, it is not uncommon for Tigers to enter water either to catch prey or to cool down in the heat and so they are naturally good swimmers, which is something that the Liger seems to have inherited. Lions do not like water however and so it is often reported that it does take some time for the Liger to take to its water loving lifestyle. Another odd thing is the fact that the Liger appears to make both Lion and Tiger noises but its roar is more like that of a Lion's.

Most Ligers are created through the accidental introduction of Lions and Tigers in the same enclosure although it can take up to a year for the two to mate. After mating the male Lion with the female Tiger, the Tiger gives birth to a litter of between 2 and 4 Liger cubs after a gestation period that lasts for about 100 days. As with the young of other large felines, the Liger cubs are born blind and are incredibly vulnerable, relying heavily on their mother for their first 6 months of life. As with Lion cubs, young Ligers have darker spots on their fur which helps to provide them with extra camouflage. However, as with some adult Lions, these spots often remain on Ligers and are most prominent on their underside. Many Liger cubs are sadly born with birth defects and often don't survive for longer than a week.

Like the rest of the world's felines, the Liger is a carnivorous animal meaning that it hunts and kills other animals in order to gain its nutrition. Although the wild diet of the Liger can only be presumed, it is thought to be similar to that of a Tiger mainly hunting larger herbivores including Deer, Wild Boar and (due to their immense size) possibly small or vulnerable Asian Elephants. In captivity they tend to eat an average of 20lbs of meat a day but it is thought that a Liger would easily devour 100lbs worth of food in one sitting. The Liger has an enormous and incredibly strong jaw with sharp, pointed teeth which are ideal for tearing through flesh. Ligers also have very muscular bodies and sharp claws which also help them to catch and eat their prey.

If they were found in the wild, the Liger would be the most dominant predator in their environment and would therefore have no natural predators to worry about, with the obvious exception of Humans. Much like Lions and Tigers, Ligers would be subjected to both hunting for trophies and their fur, along with severe habitat loss throughout much of what would be their natural range. In captivity, many Liger cubs are born with fatal birth defects due to the fact that it is the result of cross-breeding of two different species. Another problem to consider is the unnatural nature in which Ligers are both bred and kept all around the world. As it is highly unlikely that Ligers can occur in the wild today, they are merely being bred and kept by zoos in order to make money.

Although like many other hybrids Ligers tend to be sterile, it has been known for a female Liger to be able to produce offspring but a fertile male Liger has never been recorded. She will either be bred with a male Lion or a male Tiger to either produce a litter of Li-Liger or Ti-Liger offspring depending on the species of the father. One of the most famous Ligers is a Hollywood creation named Hercules, who is the offspring of a male Lion and a female Tiger in an institute in Florida. At the age of three he stood at 10ft tall when on his hind legs and weighed half a ton. Another reason as to why Ligers would be rarely produced in the wild is that if a male Lion and a female Tiger came across one another, they are much more likely to fight to defend their territory or avoid one another completely in order to risk getting hurt.

The Liger has been bred by people since the early 19th century when a litter of Liger cubs was born in Asia in 1824. It was more than 100 years however until the next recorded litter which was in a zoo in South Africa just before World War II. Although Ligers are known to be quite even tempered, there remains a great deal of controversy over the cross-breeding of two different animal species, particularly when it is so highly unlikely to occur without Human intervention. Today there are a number of Ligers found in zoos and animal institutes around the world, who are bred (generally by accident) and kept as a money-making attraction.

As there is no real scientific name assigned to the Liger due to the fact that it is made from cross-breeding two separate species artificially, and that is it is not found in the wild, the Liger has no conservation status. The Liger is found in only a handful of enclosures on the planet but they remain frowned upon by many as they do not exist in the wild and therefore have no value as such to conservation. Tigons are more rarely found than Ligers today however, in the late 19th and early 20th centuries there were more of them than there were Ligers. The breeding of Ligers is now banned in a number of countries around the world.

View all 19 animals that start with L

The 10 Most Venomous Animals On Earth!

What are the most venomous animals in the world? To answer the question, let’s first define “most venomous.” After all, some folks may calculate venomosity using a potency-versus-size calculation; others may focus on victim statistics across the animal kingdom. However, for our purposes, “most venomous” means “venomous animals most dangerous to humans.” One more thing […] Read More