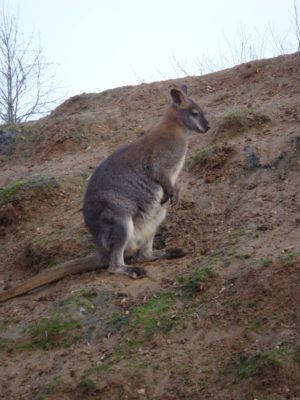 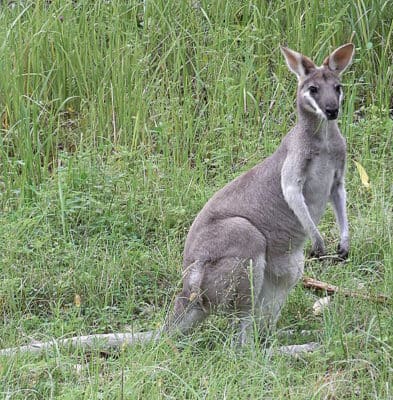 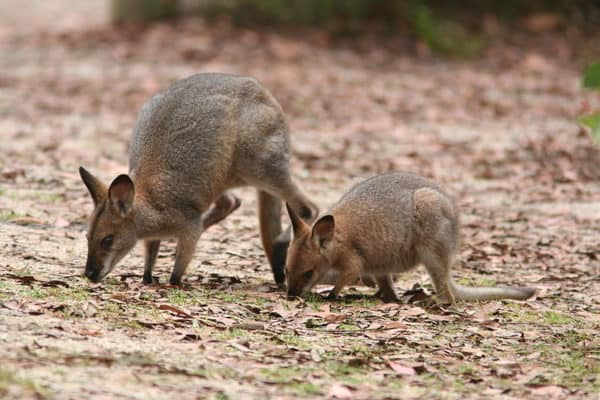 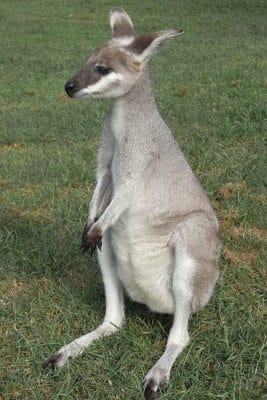 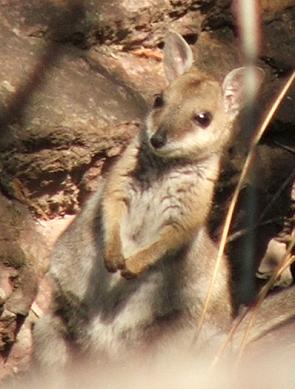 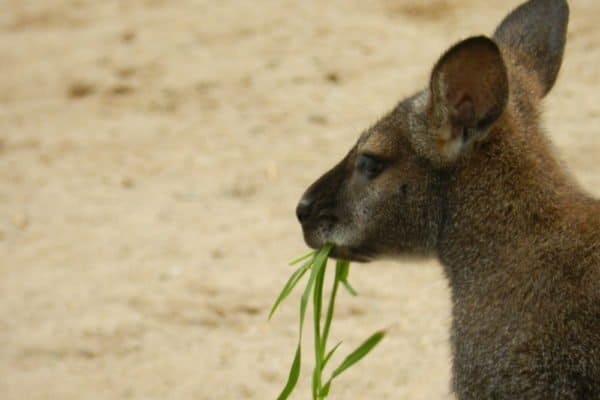 The main distinction between wallabies and kangaroos is based primarily on kangaroos being significantly larger than most wallabies.

Like kangaroos, wallabies are marsupials that are part of the family Macropodidae. Native to Australia and Papua New Guinea, wallabies have been introduced to other areas of the world, including New Zealand and the United Kingdom. Of the more than 30 species that survive today, several are listed as threatened or endangered – and at least five species have gone extinct.

Wallabies are mammals that are classified into the infraclass Marsupialia. They belong to the order Diprotodontia, which includes kangaroos, opossums, wombats, and koalas. They are further classified into the suborder Macropodiformes. They are members of the Macropodidae family along with kangaroos. The term means “big feet.” In fact, the distinction between the two creatures is arbitrary and mostly relates to size. Most wallabies are significantly smaller than kangaroos, but some can be as big as six feet long (including their tail).

The term wallaby is derived from the Dharug “walabi” or “waliba,” which comes from the Eora Aboriginal people of coastal New South Wales, which is near modern-day Sydney. Starting around the year 1802, the creatures were collectively called “brush kangaroos.”

Wallabies span more than 30 species. Across these species, these marsupials vary widely in size. On average, however, wallabies measure anywhere from one to three and a half feet in height, and their tails measure anywhere from 10 to 29 inches in length. These creatures weigh anywhere from around four to 53 pounds. Although typically small to medium-sized, the largest species of wallaby average about six feet from head to tail - about three feet tall. For reference, kangaroos are usually three to eight feet tall and weigh 40 to 200 pounds.

These mammals have small forelimbs that are primarily used for feeding. They possess large ears and a long, pointed snout. Their elongated faces provide ample jaw room for a series of large, flat teeth that are specialized for chewing up plant materials.

Wallabies also have large, strong tails. Although they aren’t prehensile, or capable of gripping objects, these tails are used for balancing and for propping up while in seated positions. The creatures’ powerful hind legs allow them to bound along at high speeds and to jump across vast distances. In addition to using them to jump high, they also kick these powerful legs when in confrontations with predators or with other wallabies.

When threatened, wallabies thump their feet, kick their hind legs and emit a hoarse noise to alert other members of their group. They are usually more active during the evening and early morning hours, and that’s especially true in arid areas.

Wallabies are distributed widely across Australia, but they are most prevalent in rugged, remote areas that are heavily forested. Few of these creatures are found on the plains or in other more open areas. They are native to Australia and Papua New Guinea, and they have also been successfully introduced to New Zealand, the United Kingdom, and other areas around the world.

Different wallaby species are grouped by habitat. For example, brush wallabies, which are made up of 11 species, are mostly found in the brushlands of southeastern Australia and Tasmania and in the open woods of coastal eastern Australia. Members of this subgenus, Protemnodon, are most like kangaroos but possess different dentition (type of teeth). They include the red-necked wallaby and the pretty-faced wallaby.

Rock wallabies live near the water among rocks. They include six named species that belong to the subgenus Petrogale. They tend to be brown and gray in color with patches, stripes and other markings. So-called nail-tailed wallabies, which fall into the subgenus Onychogalea, include three named species. Two of these species of wallabies, which feature sharp growths at the ends of their tails, are classified as endangered. Hare wallabies of the subgenus Lagorchestes are quite small, and their movements are like those of hares. Other examples of species of wallabies that are classified by habitat include scrub wallabies and forest wallabies. The latter includes the dwarf wallaby. Native to New Guinea, this species is the smallest of the genus, measuring an average of 18 inches in length and about 3.5 pounds in weight.

Certain species of wallabies have adapted to their unique habitats. For example, rock wallabies possess modified feet that are designed to grip onto stone via skin friction rather than through sharp claws.

Wallabies are herbivores, which means that their diet is made up entirely of plants. Depending on their habitat, they may subsist off of grasses, ferns, leaves, herbs, and even various types of fruit. Wallabies cover vast distances to acquire food and water, and it is not unusual to see large congregations of them huddled around watering holes.

In the wild, wallabies have few natural predators. They are most commonly hunted by dingoes, Tasmanian devils, and wedge-tailed eagles. Unfortunately for these marsupials, however, several introduced species have wreaked havoc on their security. In particular, the introduction of feral predators like dogs, cats, and foxes has proven disastrous to many species of wallaby.

Several species of wallaby appear on the International Union for the Conservation of Nature (IUCN) Red List of Threatened Species. For example, five species of the black-footed rock wallaby are listed as endangered, vulnerable, or near-threatened. The Proserpine wallaby is classified as endangered, the yellow-footed wallaby is listed as near threatened and the mala and bridled nail-tail wallabies are listed as vulnerable to extinction. Sadly, two species of wallaby, the eastern hare wallaby and the crescent nail-tail wallaby, have gone extinct.

Mating season for most species of wallaby occurs during January and February. Female wallabies become sexually mature at around 12 months of age, and the gestation period before their offspring are born is approximately 28 days. These averages vary by species, however.

When they are born, joeys, as baby wallabies are known, are around the size of a jellybean. Only a single wallaby joey is born at a time. Like kangaroo joeys, they are born completely helpless and undeveloped, and they immediately crawl into their mother’s pouch upon emerging. There, they latch onto a teat. Wallaby joeys typically remain in their mother’s pouch for around 250 days. Even after they leave, they are known to leap right back in when threats arise.

It is technically possible for a female wallaby to become pregnant again while a joey is still in her pouch. When this happens, the development of the new embryo is paused until the existing joey vacates the pouch. This phenomenon is known as embryonic diapause, and it is unique to marsupials.

The average lifespan for a wallaby is about nine years. However, wallabies that live closer to areas of human habitation, which tend to include dogs, cats, and other predators, don’t tend to survive as long.

Wallaby populations vary by species. Many species of wallaby have been largely unaffected by humans through the years, so their populations have remained stable. However, many species are now listed as endangered. One significant factor has been the introduction of non-native, feral animals, including dogs, cats, and foxes, which are known to hunt wallabies.

Another problem has been the introduction of non-native herbivores like cattle, sheep, rabbits, and goats, which now compete with wallabies for grasses, leaves, herbs, and other plants. Finally, wallabies are also hunted by humans for their meat and fur. This practice isn’t quite as common as it once was, but it still occurs and still effects population levels.

View all 29 animals that start with W

What is a wallaby?

A wallaby is a marsupial that belongs to the same family, Macropodidae, as the kangaroo. Because they are marsupials, wallabies carry their young in pouches. Generally speaking, wallabies are remarkably similar to their close relatives, kangaroos. The best way to differentiate them is through their size because wallabies tend to be much smaller. Found primarily in Australia and nearby islands, wallabies comprise over 30 species, and they exist across a wide array of habitats.

What do wallabies like to eat - are they carnivores, herbivores, or omnivores?

Wallabies are herbivores, which means that they only eat plants. These marsupials primarily subsist off of a diet of leaves, herbs, grasses, and other plants. Some species of wallaby also consume small amounts of fruit.

Are wallabies and kangaroos the same?

Wallabies and kangaroos are both members of the Macropodidae family, and they are very similar to one another. In fact, people often assume that they are basically the same creature. However, there are a few distinct ways to tell the two apart – and size is the most obvious. On average, wallabies weigh between 4 to 53 pounds while kangaroos average around 45 to 200 pounds. Minus their tails, wallabies average between one to two feet tall, while kangaroos can be as much as eight feet tall!Another way to tell the two apart is through their coloring. Wallabies generally feature coats that are brighter and contain two to three different colors. Kangaroos, on the other hand, are usually more uniform in color, and their coloring tends to be more muted.Wallabies can also be distinguished from kangaroos through their teeth. Because they subsist mostly off of leaves, wallabies’ molars are wide and flat with less-pronounced crowns. A single cutting tooth can be found at the top of the mouth. Meanwhile, kangaroos, whose diets are dominated by grasses, possess curved molars with high crowns for slicing. Their teeth also feature cross-cut ridges, which further aid in slicing off and consuming blades of grass.

Is a wallaby a marsupial?

Wallabies are, indeed, marsupials like kangaroos. Both animals belong to the class Mammalia and to the infraclass Marsupialia. The order that they both belong to, Diprotodontia, also includes koalas, wombats, and opossums. In fact, kangaroos and wallabies even belong to the same family, Macropodidae, which means “big feet,” and the offspring of both creatures are called joeys.

In general, wallabies are not aggressive creatures. Even if they are not provided with a reliable food source, they tolerate the presence of humans well – as long as some distance is maintained. However, if humans get too close, wallabies are apt to perceive them as threats. Therefore, it is best for humans to keep their distance from wallabies.Wallabies are occasionally aggressive toward one another. In such situations, they typically attack their opponent with kicks from their powerful hind legs.

Can a wallaby be a good pet?

Wallabies are not ideal pets for most people and will likely not be happy in a domestic situation. Although keeping a wallaby as a pet is legal in many places, properly caring for one is a tall order. Because they enjoy hopping around at high speeds, lots of outdoor space is needed. Wallabies are great escape artists, so tall fencing is needed. They can burrow under fences, so additional containment measures are required. These marsupials are not easy to house train and tend to be nocturnal, which can disrupt humans during the night.With all of these factors in mind, wallabies are not a good option as a pet and are better enjoyed by observing them in the wild.

What are baby wallabies called?

Baby wallabies are known as joeys, just like baby kangaroos.

The 10 Most Venomous Animals On Earth!

What are the most venomous animals in the world? To answer the question, let’s first define “most venomous.” After all, some folks may calculate venomosity using a potency-versus-size calculation; others may focus on victim statistics across the animal kingdom. However, for our purposes, “most venomous” means “venomous animals most dangerous to humans.” One more thing […] Read More