Has a long, strong prehensile tail! 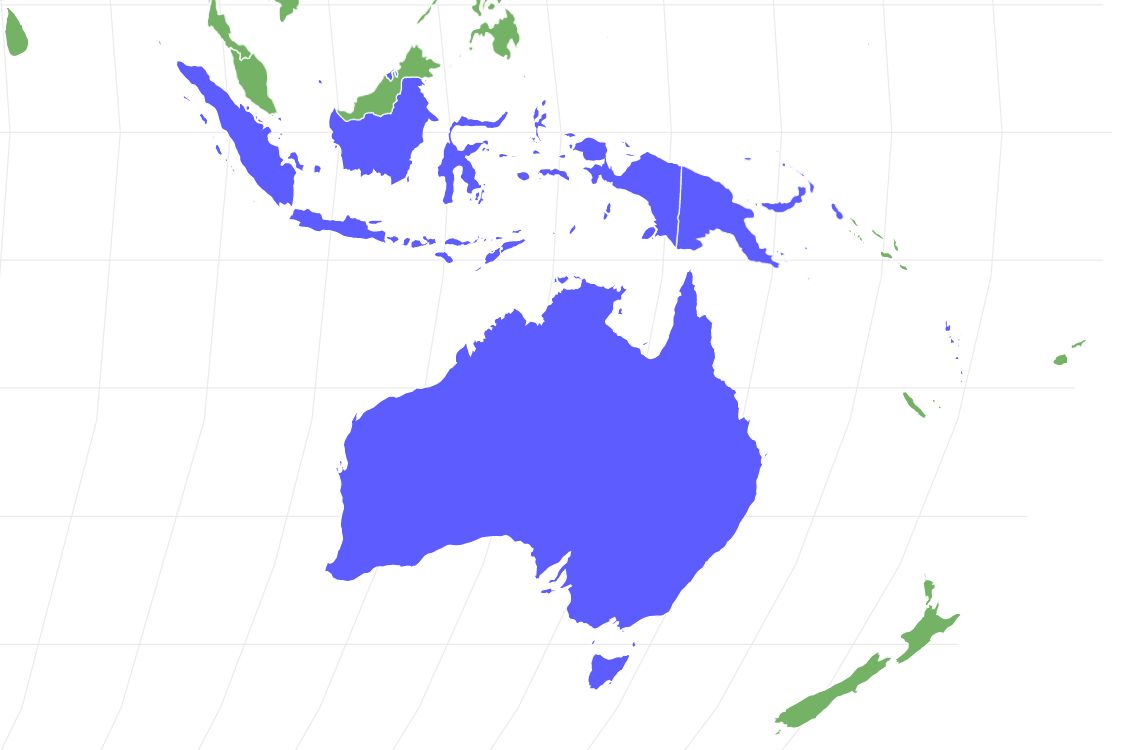 View all of our Cuscus pictures in the gallery.

View all of the Cuscus images!

The common spotted cuscus is a large possum that lives in the tropical lowland forests in New Guinea. This animal is a herbivore with a diet of different types of leaves. A female has a pouch for carrying its young like a kangaroo. The pronunciation of cuscus sounds like cuss-cuss. This animal lives up to 11 years old in the wild.

Another name for this animal is white cuscus. It belongs to the Phalangeridae family and the class Mammalia.

There are 26 species of these marsupials. Some of those include:

The male common spotted cuscus is an animal with thick, brownish-red fur with white splotches while females have gray or white fur without any spots.

This animal weighs from 6 to 13 pounds. Their body length ranges from 20 to 22 inches. A 13-pound cuscus weighs the same as a gallon can of paint. A 21-inch-long animal is equal in length to one and a half bowling pins.

This marsupial’s hairless tail measures from 12 to 17 inches long. The animal uses its tail to grasp the branches of a tree to help it climb.

One of the most interesting facts about them is it can have eyes that are blue, red, or orange depending on their species. In addition to having colorful eyes, they have vertical pupils. This gives their eyes an appearance similar to that of a snake or a cat. The design of the animal’s eyes allows it to see at night.

This animal has long nails on its feet that help it to climb trees and move from branch to branch in the treetops. They also use their nails for grooming.

The largest species of cuscus is the Sulawesi bear cuscus. They get their name from its thick coat resembling a bear’s fur. This marsupial weighs up to 15 pounds.

The smallest member of the cuscus family (Phalangeridae) is the Small Sulawesi cuscus. It weighs a little over 2 pounds.

The common spotted cuscus hides from predators among the leaves and branches in its environment. This is its main defense against threats.

These marsupials are solitary animals. Normally, they are shy creatures and try to stay hidden most of the time. However, a male can become aggressive if another male enters its territory. Males mark their territory using a liquid sprayed from their scent glands. Also, they lick twigs and sticks within their territory as a signal for another cuscus to stay away.

If one male enters another male’s territory, the animal occupying the territory may kick, bite or hiss at the trespassing marsupial.

These animals live in New Guinea as well as Cape York in Australia. Specifically, they live in trees in tropical forests, hardwood forests, and mangroves. Cuscus that live in mangroves migrates to tropical forests for the winter season.

These marsupials build homes in the hollows of trees or create platforms or nests high in the treetops where they can sleep.

They live in a warm, wet climate. The animal may sit under a large collection of leaves to cool off when it’s extremely hot. Or they sometimes crawl into a hollow log for shade during the hottest part of the day.

What does a cuscus eat?

These animals are herbivores eating leaves and fruit. Some biologists refer to cuscus as folivores because their main diet is leaves. Folium is a Latin word meaning leaf and the word voro means devour (eat). Since cuscus lives in the treetops, leaves are easily accessible and don’t require them to risk going to the forest floor to search for food.

What eats the cuscus?

Predators of these animals include eagles, pythons, and humans.

Poaching is a threat to these animals. One of the most discouraging facts is they are hunted by humans for food. Also, hunters sometimes use their skin to make clothing and other items.

Habitat loss is also a threat. Deforestation takes away the trees where these animals live and reproduce.

Despite these threats, the official conservation status of the common spotted cuscus is Least Concern. Their population is categorized as stable.

The animal breeds at any time throughout the year and has multiple partners. Though not much is known about their mating rituals, biologists have observed cuscus males and females making clicking, screeching, and hissing sounds during the courtship period.

A cuscus can have from 1 to 4 babies, but the average number of offspring is 2. A newborn weighs less than an ounce. They are born blind, deaf, and without fur. The babies have to find their way by smell and touch into their mother’s pouch to nurse. Any baby that’s not strong enough to find and latch onto its mother’s teat to drink milk will die. The babies are called joeys.

The exact population of the common spotted cuscus is unknown. But, its conservation status is Least Concern. Its population is reported as stable.

Are cuscus carnivores, herbivores, or omnivores?

What is a cuscus?

A cuscus is a large possum. This animal lives in tropical forests, hardwood forests, and mangroves. They are from New Guinea and Cape York on the continent of Australia. They are marsupials (like kangaroos) carrying their young in a front-facing pouch.

A male common spotted cuscus has brown/red thick fur with white spots. A female has solid gray or brown fur without spots. One of the most notable features of this possum is its eyes. Cuscus can have blue, orange, or red eyes. In addition, these animals have vertical pupils like a snake or a cat. Another notable feature of this animal is its tail. It’s hairless and can curve around branches like an extra leg. A cuscus’ tail and long claws/nails help it to climb trees and jump between branches.

Is a cuscus endangered?

It depends on the species. The common spotted cuscus is categorized as Least Concern with a stable population.

Another species called the blue-eyed spotted cuscus is listed as Critically Endangered with a decreasing population. Its population is threatened by poaching activity and loss of habitat due to deforestation.

What is the proper pronunciation of cuscus?

The proper pronunciation of cuscus is easy to learn if you remember it sounds like you’re saying, ‘cuss-cuss.’

What does a cuscus eat?

A cuscus eats leaves and fruit. The types of leaves or fruit it eats depends on the food source that’s most abundant in its habitat. In short, a cuscus eats whatever plants or fruit are most plentiful in its living environment.

What Kingdom do Cuscus belong to?

Cuscus belong to the Kingdom Animalia.

What phylum do Cuscus belong to?

Cuscus belong to the phylum Chordata.

What class do Cuscus belong to?

Cuscus belong to the class Mammalia.

What family do Cuscus belong to?

Cuscus belong to the family Phalangeridae.

What order do Cuscus belong to?

Cuscus belong to the order Marsupialia.

What genus do Cuscus belong to?

Cuscus belong to the genus Phalanger.

What type of covering do Cuscus have?

Cuscus are covered in Fur.

In what type of habitat do Cuscus live?

What are some predators of Cuscus?

Predators of Cuscus include snakes, humans, and large birds of prey.

How many babies do Cuscus have?

The average number of babies a Cuscus has is 2.

What is an interesting fact about Cuscus?

The Cuscus has a long, strong prehensile tail!

What is the scientific name for the Cuscus?

The scientific name for the Cuscus is Phalanger maculatus.

What is the lifespan of a Cuscus?

How fast is a Cuscus?

A Cuscus can travel at speeds of up to 15 miles per hour.