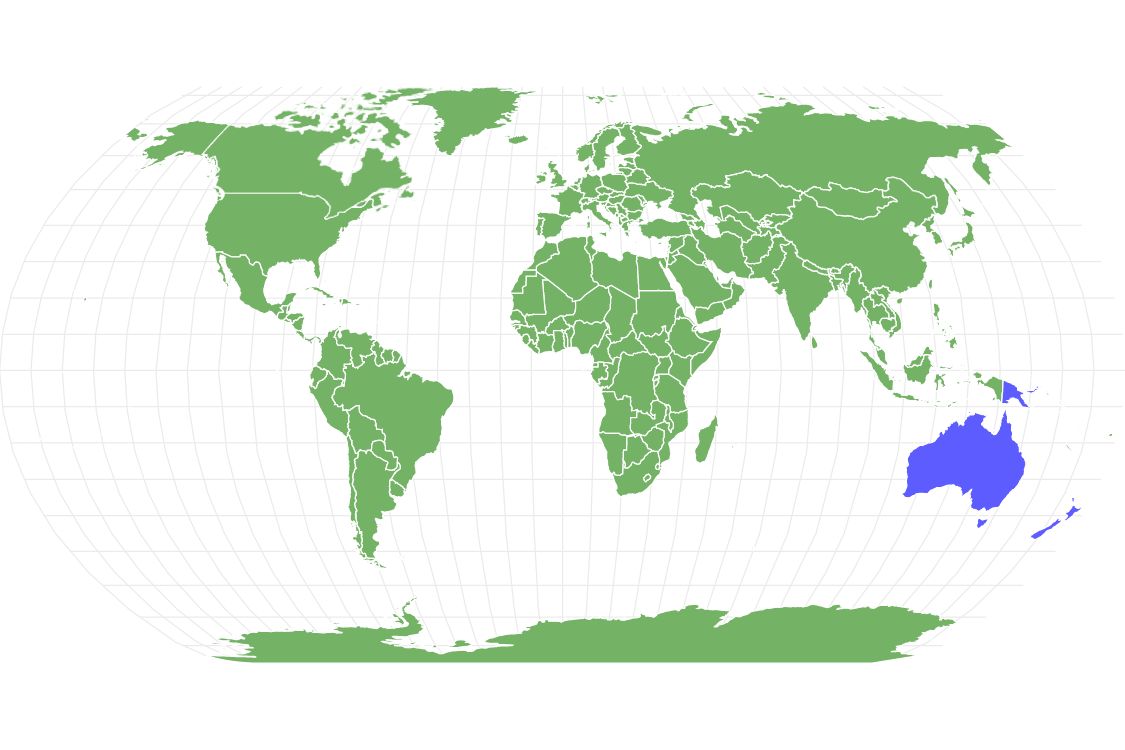 View all of our Kookaburra pictures in the gallery.

View all of the Kookaburra images!

“The kookaburra is the world’s largest kingfisher!”

The kookaburra, often called the laughing kookaburra, is a large subgroup of the kingfisher bird. It is diurnal, meaning it is most active in the daytime. They will sleep for about 12 hours at night. They are commonly found in eucalyptus trees, which also may be recognized as old gum trees. Australian folklore says that the morning melody of the kookaburra is a cue for the “sky people” to “light the sun each morning”. Kookaburras are social birds, living in flocks.

Where to find Kookaburra

The kookaburra is native to Eastern Australia, though it has been introduced to other areas as well. Kookaburras live predominantly in the Oceana region. You can find these kingfishers in Southern Australia, New Zealand, New Guinea, and Tasmania too. Kookaburras also like to dwell in parks, gardens, and sometimes in people’s backyards.

The best place to find these fascinating birds is in woodland forest areas and wetlands. They reside in temperate climates. You may see them up in trees or catching prey. Hearing them will likely be an easier task than spotting them. Listen for their laugh-like call around dusk and dawn and you will hear an entire group of kookaburras “singing” loudly together.

Both male and female kookaburra mates work together to prepare nests and also to care for their young. The terrestrial tree kingfishers often utilize naturally occurring holes in trees and will also burrow into arboreal termite mounds. These mounds are typically about two feet deep and have an entrance around four inches wide.

The kookaburra’s scientific name is Dacelo novaeguineae. It is alternatively called a laughing kookaburra or the bushman’s alarm clock. The nickname of bushman’s alarm clock comes from the fact that this bird lets out its call early in the morning, similar to an alarm. It is also sometimes referred to as a terrestrial tree kingfisher. It belongs to the Aves class and the Alcedinidae family.

Kookaburras generally have brown, white, and cream-colored bodies. They have dark brown bands across their eyes. Their feathers can also have gray and black coloring. There are also blue specks present near the tail of males. Kookaburras usually have brown eyes. Their mighty beak measures between 8 and 10 centimeters in length. These birds have a size range of 15.4 to 16.5 inches in height and 15 to 17 inches in length. They typically weigh between 13 and 16 ounces with females being slightly bigger in mass.

The kookaburra’s wingspan is over two feet long, ranging between 25 and 26 inches. There are some neat facts about their defensive features. Their colors help to camouflage them in their natural habitat, and they will frequently puff their feathers to make themselves look bigger when threatened.

Unlike many other bird species, kookaburras are not migratory. They occupy the same territory year-round. They do not fly south for the winter. Instead, they huddle together for warmth. They are able to regulate their temperature quite well.

The kookaburra is a carnivore, meaning it eats only meat from other animals. It perches in a tree and will watch for prey to come near. When it spots its prey, the kookaburra swoops down and seizes it in its strong beak. One of the more grisly facts about this species is the way it kills its meal. It repeatedly beats the prey against a hard surface such as a tree branch, battering and rendering it lifeless, and making it more tender before eating it. If the prey is small enough, the kookaburra will skip the beating and swallow it whole.

What does kookaburra eat?

Kookaburras eat many animals including snakes, large insects, crustaceans, rodents, frogs, and small birds. Bird eggs are also part of a kookaburra’s diet. When in captivity, such as in zoos, kookaburras are also commonly fed mice, mealworms, and crickets.

The main threat kookaburras face in the wild is habitat loss. Wildfires in Australia are huge contributors to the destruction of their homes. Humans poaching these incredible animals for the pet trade is also a danger to the wild population. Sadly, kookaburras are sometimes poisoned indirectly from pesticides that kill rodents and other invasive species, which are easy meals for these birds. The IUCN has classified these birds as least concern on the red list with a stable population. Kookaburras also have an array of natural predators.

Birds of prey such as eagles, owls, falcons, and hawks eat kookaburras. Large reptiles like pythons and monitor lizards will feed on them as well. Other predators include quolls, foxes, and even pet cats. These animals, in particular, may take advantage of chicks who are vulnerable, snatching them from their nest.

Kookaburras are a monogamous species that stay together for life. The mating season takes place between August and January. Both the male and female will call out to each other, and the male will bring food to the female in preparation for mating.

The mother kookaburra will lay between two and four eggs. After 25 to 29 days, the eggs hatch, and the chicks are born. At the time of birth, the chicks do not have any feathers yet. Sometimes, in competition for food, the chicks will attack and kill the youngest among them. During incubation, and after hatching, siblings will help care for the new young. The chicks are fed for about a month before leaving the nest, though they remain with their family for up to four years. They reach sexual maturity around one year old.

Kookaburras molt annually, during late winter and early spring. Kookaburras have an expected lifespan of 15 to 20 years in the wild and over 20 years in captivity.

The precise number of kookaburras in the wild is unidentified. Although there is not an explicit count of these birds, the population is considered stable. The kookaburra conservation status is “least concern”, with no major threat of population decline currently.

What is a kookaburra?

A kookaburra is a terrestrial tree kingfisher bird.

Does the kookaburra Migrate?

No, the kookaburra does not migrate.

How many eggs does the kookaburra lay?

The kookaburra lays between two and four eggs on average.

How fast does the kookaburra fly?

The kookaburra is a slow-flying bird. It can fly up to about 20 miles per hour.

What is the kookaburra’s Wingspan?

The kookaburra’s wingspan is 25 to 26 inches, a little over two feet long.

When do kookaburras leave the nest?

Kookaburras leave the nest around one month old but stick around for quite a while as helpers.

A kookaburra’s call sounds similar to human laughter. It also has variations of shrills.

Kookaburras can be friendly and seem to tolerate humans well.

Why do kookaburras laugh?

The kookaburra’s “laugh” is actually a territorial call. It warns others to keep out of their territory.

Do kookaburras kill other birds?

Yes, kookaburras will kill and eat smaller birds if given the opportunity.

What is the kookaburra famous for?

The kookaburra’s fame is most likely attributed to a song from Australia called Kookaburra. It is commonly known as the Kookaburra song or Kookaburra sits in the old gum tree. The song is a nursery rhyme by Marion Sinclair.