North Dakota is a midwestern state that borders Minnesota, Montana, and South Dakota. With a population of about 780,000, it is one of the least populous states in the U.S.

The state has only a few forested areas. It has prairies, wetlands, rivers, floodplain forests, and the dry stretches of land known as the Badlands. Its landlocked location in the center of the North American continent gives it a continental climate, which is characterized by long, frigid winters and short, fiercely hot summers.

This environment means there are many wild animals roaming the state. People in North Dakota are used to seeing moose and bison crossing the roads. The grasslands and forested areas are home to white-tailed deer, ferrets, beavers, and raccoons.

The Official Animal of North Dakota

Most states have mammals as their state animals, but North Dakota has a bird. Its official state bird is the western meadowlark (Sturnella neglecta). This lovely songbird has gray feathers and a bright yellow chest. Western meadowlarks live in many western states, including Texas and Wisconsin.

North Dakota also has an honorary state equine, which is the Nokota horse. This historically significant wild horse is descended from the last surviving population of wild horses in North Dakota. Nokota horses almost became extinct, but conservation efforts have helped preserve them. The Nokota Horse Conservancy is the primary group that protects these endangered horses.

Where To Find the Top Wild Animals in North Dakota

North Dakota is a dream destination for any wildlife watcher. With low population density and vast, open spaces, it’s easy to see bison, antelopes and other large ungulates everywhere.

North Dakota has 63 wildlife refuges, which is more than any other state. Chase Lake National Wildlife Refuge, established in 1908, was one of the first wildlife refuges in the country. It is a breeding ground for the native American white pelican.

Theodore Roosevelt National Park is a protected area where you can see wild horses, coyotes, bobcats, rodents and mule deer.

The Most Dangerous Animals In North Dakota Today

Bison roam free in North Dakota, and they frequently cross major roads in herds. If a person or car appears to be threatening, they can become aggressive and dangerous. It’s smart to keep them at a respectful distance.

The state has one native venomous snake, which is the prairie rattlesnake. These pit vipers mostly live in the western half of the state. These dangerous snakes hide in the tall grass and will attack if they feel threatened, so hikers should be wary.

Despite the abundance of wildlife, North Dakota has a high number of mammals, fish and reptiles on the endangered list. Among these, the state has made it a priority to protect the following species:

Some animals, including river otters and peregrine falcons, almost became extinct in the state. Conservation efforts have helped restore their populations.

North Dakota is a wonderful place to see wildlife. The state’s prairies, grasslands and hills are home to many strange and wonderful wild animals. The many protected areas are excellent for birding and wildlife watching.

What Animals Live in North Dakota?

Although many people think of North Dakota as a frozen tundra, it has a varied topography with wetlands and mixed grass prairies.

Animals that thrive in open grasslands, wetlands and cold climates are the most common animals you’ll find in North Dakota. You can spot snowy owls, eagles, elk, mountain lions and a wide variety of rodents.

The wetlands areas are home to waterfowl, river otters, beavers, reptiles and amphibians. One of its strange native reptiles is the northern leopard frog.

Are There Wolves in North Dakota?

It may seem strange, but North Dakota does not have resident gray wolves. It has what’s known as an incidental population. North Dakota borders the Western Great Lakes Population Segment, which is a group of gray wolves living in Minnesota, Wisconsin and Michigan. Occasionally, these wolves cross the border into North Dakota.

Are There Any Moose in North Dakota?

There are many moose in North Dakota. They are not the only ungulates in the state. North Dakota also has elk, bighorn sheep, bison, pronghorn, mule deer and white-tailed deer.

How Many Animals Are in North Dakota?

North Dakota has many native species, including: 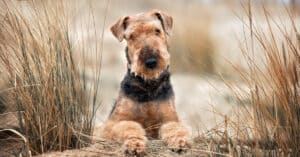