At 1,214 square miles, Rhode Island is the smallest state in the nation, and some may wonder how it could possibly have any wildlife. Only New Jersey is more densely populated, so there’s hardly enough room for human beings! But wild animals care nothing for state boundaries. It’s climate, the presence of food and shelter, and whether they can find proper mates that concern them. Rhode Island’s largely humid continental climate, geography, and proximity to both freshwater and the ocean are just the thing for many wild creatures. Read on to learn more.

The Official Animals of Rhode Island

This seal can weigh as much as 370 pounds. There are five subspecies.

The Rhode Island Red is a chicken. It is a stately bird with mahogany red feathers and a black tail, and it lays brown eggs.

This silvery fish spends some of its life in the ocean and travels up freshwater rivers to spawn.

The quahog is a type of clam whose shell was used to make wampum, a Native American currency. Also called the hard-shell clam, it makes good eating and is a favorite at Rhode Island clam bakes.

Where To Find The Top Wild Animals in Rhode Island

People may be surprised to learn that black bears have been seen in Rhode Island. These bears seem to be wandering in from Connecticut and Massachusetts. The other large mammal is the white-tailed deer, which is famous for adapting to changing conditions and thriving near human habitations. The fallow deer is not native to Rhode Island but originated in Europe and the Middle East. It can be told from white-tailed deer because of its shovel-like antlers and spotted coat.

Unsurprisingly, most large mammals in Rhode Island are found in their share of the Atlantic Ocean. They include the rorquals such as the blue, humpback, and fin whale, the North Atlantic right whale, and the bowhead whale. The sperm whale can be found in the deeper ocean waters and the pygmy and dwarf sperm whale are seen off the coast along with the rorquals and the beluga whale. Other marine mammals found off Rhode Island are dolphins, beaked whales, and harbor porpoise. The harbor seal, of course, is the state mammal, and it is joined by the gray seal. Some of the rarest sightings are of the bearded seal, which gets its name from its abundant and curly whiskers.

Rodents and Other Small Mammals

There are more species of small mammals in Rhode Island than large ones. Among the rodents are the eastern chipmunk, the woodchuck, and a few species of squirrel, including the eastern gray squirrel and the red squirrel. The southern flying squirrel is also found in Rhode Island, as are New World rats and mice, jumping mice and voles. The beaver is one of the largest of the rodents, and the somewhat smaller muskrat can be found in Rhode Island wetlands. Some of the most common rodents, the brown rat, the black rat, and the house mouse have become pests.

Other small mammals are bats and foxes, the striped skunk, the opossum, the raccoon, and several species of shrew, which look like rodents but are in their own order.

It’s not surprising that many species of birds who live in or visit Rhode Island are waterfowl. These include ducks, swans, and geese, including the smew, whose male has an elegant black and white plumage. The origins of its strange name are uncertain. Other ducks are buffleheads, goldeneyes, and mergansers.

More birds that live in wet areas are the corncrake, the sora, the American coot and the purple gallinule, the sandhill crane and the American avocet, herons, egrets, pelican, spoonbills, and ibises. Shorebirds include many species of sandpiper, godwits, dunlins, curlews, and whimbrel. One of the seabirds is the parasitic jaeger, which gets its name because it steals food from other birds. Instead of penguins, Rhode Island’s shores are home to murres, the Atlantic puffin, the razorbill, and the dovekie. Many species of gulls at least visit Rhode Island, while some, such as the herring gull and the great black-backed gull, breed there.

Rhode Island is also the breeding ground for a large number of birds of prey, including hawks, kites, falcons, merlins and kestrels, harriers, goshawks, and eagles. Other avian predators are owls, including the barn owl, the boreal owl, and the great gray owl. The burrowing owl, a strange little bird that lives in burrows dug by prairie dogs, is diurnal instead of nocturnal like other owls and deters predators by imitating the rattle of a rattlesnake. One of the rarest of Rhode Island’s owls, it is considered a vagrant, which means it’s been seen now and then.

Other birds found in Rhode Island are the rock pigeon and the mourning dove. There are cuckoos, woodpeckers, and the chimney swift, which really does build its nest in people’s chimneys. The ruby-throated hummingbird breeds in Rhode Island, as does the common nighthawk, the eastern whippoorwill, and several species of vireos. Also found in Rhode Island are the bluejay, the crow, the raven, chickadees, swallows, kinglets, the horned lark, nuthatches, cedar waxwings, and the brown creeper. The European starling isn’t native to Rhode Island but is a common sight, as are mockingbirds and thrushes, including the American robin. There are sparrows, buntings, and finches, blackbirds, cowbirds, orioles, and warblers. The cardinal and its cousins the tanagers, grosbeaks, indigo, and painted buntings are also seen.

Rhode Island does get cold in the winter, so its population of reptiles and amphibians may not be as extensive as it is in warmer climes. However, the list of herps is surprisingly robust and includes the blue-spotted, four-toured, and eastern red-backed salamanders and the red-spotted newt. Frogs and toads include the eastern spadefoot, the spring peeper, the green frog, the American bullfrog, the pickerel frog, and the American toad. As for snakes, the eastern worm snake and the northern black racer are found in Rhode Island, as are garter snakes, ribbon snakes, and the tiny northern brown snake. The one venomous snake is the timber rattlesnake, which is the only rattlesnake found this far north.

Turtles include the painted turtles, the common snapping turtle, the musk and the box turtle, and the northern diamondback terrapin. Some of the rarest sea turtles, such as the hawksbill, also swim in Rhode Island’s ocean.

As with most places, insects are numerous in Rhode Island, with over 1000 species of these invertebrates identified. These include the antlion, whose adult has delicate gossamer wigs but whose larvae set a trap for ants in sandpits. Butterflies and moths include the moth of the banded woollybear caterpillar, whose bands are supposed to predict the severity of the winter, the bluish spring moth, several types of large and beautiful swallowtail and milkweed butterflies and silk moths, a moth called the changeable grass-veneer, and a strange moth called the grapeleaf skeletonizer, which looks like a wasp. Even the gorgeous blue morpho has been sighted in Rhode Island, even though it’s native to Central America.

There are many species of ants, wasps, and hornets, and it appears that the notorious Asian giant hornet or murder hornet has made its way to the state. Unfortunately, this insect not only has a powerful sting but likes to eat honey bees.

Beetles include click beetles, weevils, fireflies, ladybugs, stink bugs, and large beetles such as the Eastern Hercules beetle and the elephant rhinoceros beetle. Some beetles, such as the festive tiger beetle, the golden tortoise beetle, the jewel weevil and the dogbane leaf beetle have metallic or iridescent coloring. There are also aphids, craneflies, dragonflies and damselflies, including the fragile forktail, grasshoppers, crickets, katydids flies, mosquitoes and walkingsticks.

Other arthropods are different species of spiders, millipedes, centipedes, ticks, mites, and sowbugs.

Fish are abundant in Rhode Island’s fresh and saltwater. Besides the striped bass, the state fish, freshwater fish include alewives, shad, trout, salmon, sturgeon, catfish, and carp. There’s a fish called the Dolly Varden, a relative of the salmon named for a character in a Dickens’ novel, or more precisely, a type of colorful dress named after the character.

Other fish that live in the lakes, ponds, rivers, and streams of Rhode Island are sunfish, grayling, shiners, perch, pickerels, and pumpkinseed. The splake, a cross between a female lake trout and a male brook trout is also found in Rhode Island as are striped bass hybrids.

Saltwater fish include seatrout and several species of tuna, including the albacore and the Atlantic bluefin. Sharks include the bull shark, the dog shark, the mako shark, and the great white shark. The cunner is also called the seaperch and waits out Rhode Island’s chilly winter by hiding under rocks and going into torpor. There’s also the king mackerel, the pollack, and the pompano. Though the monkfish is considered so ugly that its head is frequently cut off to not scare away buyers at the fish market, the oyster toadfish is even uglier. Indeed, one of its other names is the ugly toad.

Though no wildlife area in Rhode Island is very far from another, some people may still wish to go to the zoo to experience animals native and exotic. Zoos in Rhode Island are the Roger Williams Park Zoo in Providence, which is the home of Elsa the white alligator, and Biomes Marine Biology Center in North Kingstown.

Among the animals not listed above are the dwarf balloon Aeolis, a type of nudibranch. It is a hermaphrodite, and when two meet they have a contest to see who will be the male. They’re found at the shore to depths of about 30 feet in the ocean.

The female of the white-marked tussock moth is wingless, and once she emerges from her cocoon she simply waits for a male to find her. Then, she lays eggs and dies. The eggs overwinter and the caterpillars, who are covered with irritating hairs, hatch in spring.

The American mink is a type of weasel and is surprisingly common in the state, though it is elusive. It lives near water and mostly eats aquatic animals. The mink is prized for its luxurious fur, and though farm-raised animals can have fur that ranges from white to black, the fur of a wild mink is brown.

The Most Dangerous Animals In Rhode Island Today

Rhode Island doesn’t have a lot of dangerous animals, but there are still a few that a person should steer clear of.

What animals are found in Rhode Island?

A great many wild animals are found in Rhode Island despite the state’s population density and its small size. They include the black bear, the white-tailed deer, foxes, bats, many types of birds and many kinds of aquatic animals including invertebrates, fish, seals and whales.

Are there wolves in RI?

There are no wolf predators in Rhode Island.

What is the most dangerous animal in Rhode Island?

The most dangerous animal in Rhode Island is probably the mosquito, which spreads diseases.

What is Rhode Island mammal?

How Old is the Oldest Pug Ever? 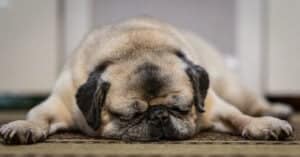