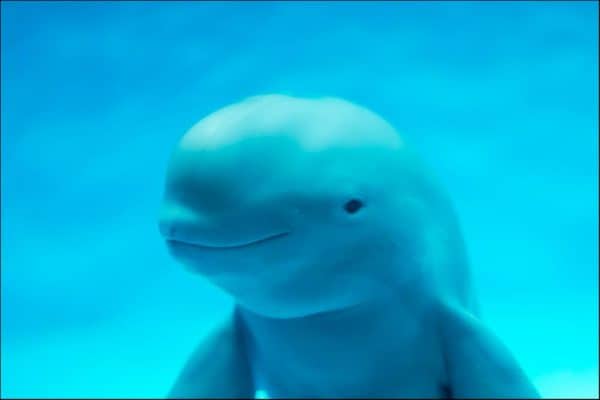 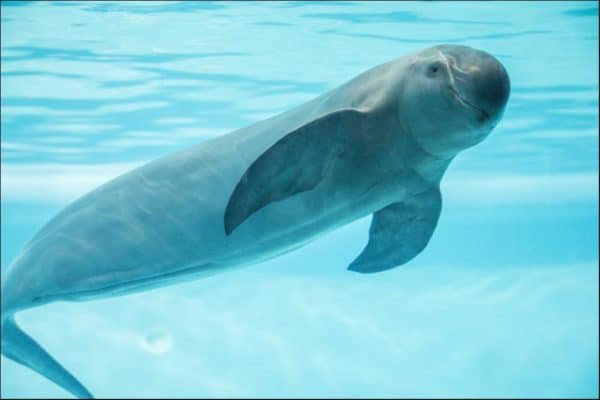 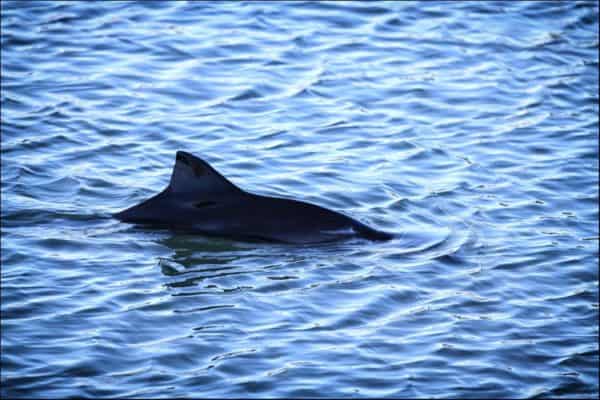 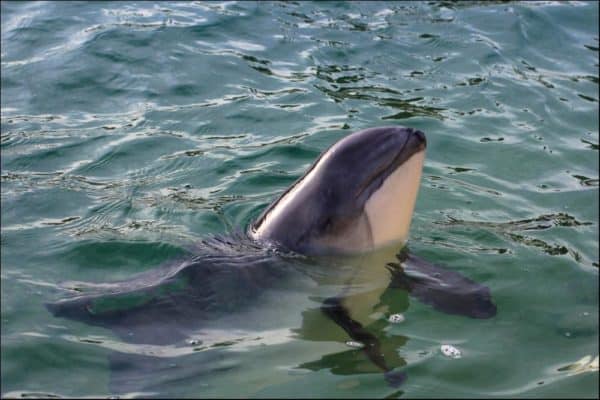 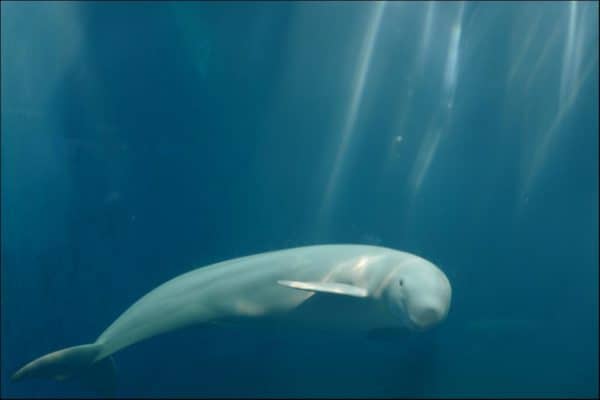 A porpoise can swim as fast as 34 mph!

There are seven species of porpoise and they are often mistaken for dolphins. These mammals live in rivers, estuaries, and bays in many areas of the world. A porpoise can dive more than 600 feet into the depths of the ocean. Porpoises communicate with one another in a series of whistles and clicks.

• Porpoises can live to be 23 years old, dependent on its health and potential predators in its area.

• While social, these mammals can usually be seen traveling in pairs or groups (shoals) of three. However, harbor porpoises are known to travel in a shoal of up to 100!

• They are carnivores that eat mostly fish and crustaceans. It swallows its prey whole and often alerts other porpoises once it finds a food source.

• Porpoises are related to both dolphins and whales. To tell the difference between a porpoise and dolphin, look at the animal’s nose. A dolphin has a beak-like nose while a porpoise has a more rounded head and shorter nose.

• These animals have a layer of blubber that helps them to stay warm in cold ocean waters.

The scientific name of a harbor porpoise is Phocoena phocoena. The word ‘Phocoena’ is Latin for ‘pig fish’. A porpoise is sometimes called a puffin’ pig because of the exhaling sound it makes when it reaches the surface of the water after a dive. Some scientists think the noise sounds like a sneeze!

Porpoises vary in color but all have smooth, sleek skin and their backs are darker in color than their stomachs (known as countershading). Most porpoises are a shade of gray on their back and a lighter gray or white on their stomach, however, the Burmeister’s porpoise is mostly dark gray or black in color and the Dall’s porpoise has a black and white coloring.

Porpoises have strong flippers and teeth with spade-shaped tips – their dentition is actually a way they differ from dolphins. A porpoise has a rounded head and a triangular-shaped dorsal fin. However, as their name suggests, the finless species of porpoise do not have fins.

Porpoises range from 4.7 to 7.7 feet in length and can weigh between 110 to 490 pounds. Females are usually larger than males. Picture a full-size mattress and you are looking at an item equal in length to an average porpoise. A porpoise of around 200 pounds is equal in weight to half of an adult reindeer. The longest of the seven species is the Dall’s porpoise –  at 7.5 feet.

Like other mammals, porpoises have defensive features that help them escape predators. For one, the back of a porpoise is darker than its stomach. This helps them to blend into their watery environment. Porpoises are some of the fastest swimmers in the ocean, clocking in at 34 mph. This can help them get away from some predators as well.

A porpoise doesn’t use its spade-shaped teeth to chew up its prey. Instead, the shape of their teeth helps them to grab fish, squid, octopus, and crustaceans, so they can swallow them whole! These amazing creatures have what are called gum teeth between their spade-shaped teeth. The gum teeth are there to help a porpoise grasp and hold on to a slippery food source like a squid or an octopus. No wonder they call them gum teeth!

Porpoises use echolocation to find prey. Echolocation happens when a porpoise makes a sound that bounces off its prey and echoes back to them. This allows a porpoise to detect the location of prey even when it’s swimming in the dark depths of the sea!

The seven species of porpoise have a range of habitats across the globe. In the region of the North Atlantic Ocean, they are found near West Greenland to Cape Hatteras. In the North Pacific Ocean, their range goes from near Japan to the Chukchi Sea. They also swim in the Barents Sea toward the coast of western Africa and live in the Beaufort Sea as well.

Porpoises live in estuaries, rivers, bays, and fjords. Though they do usually go out into the ocean to dive and hunt for prey, porpoises usually stay in water that is 500 feet deep or less. In short, they are known for swimming near coastlines.

Porpoises migrate to different parts of coastal regions. For instance, they may move to a different area of a river or bay to find another source of food.

In addition, some porpoises migrate at the change of the season. As an example, some Harbor porpoises spend the summer in the Gulf of Maine and migrate to the North Carolina coastline for the winter months.

What does a porpoise eat? Porpoises are carnivores, eating fish such as cod, herring, and pollack. They also eat squid, octopus, and sometimes crabs.

Since a porpoise swallows its food whole, there are some items that are bad for them to eat. For example, when a porpoise tries to swallow a flatfish it can choke to death. This fish is large, wide, and not easily swallowed, unlike many other types of fish hunted by porpoises. Most porpoises know by instinct that they shouldn’t eat a flatfish because of the danger it presents to them.

Porpoises eat around 7 to 30 pounds of food per day, depending on the species and size. The harbor porpoise eats about 10 pounds of food each day, equal to close to 10 percent of its body weight. Ten pounds of fish weighs about the same as a large can of paint!  While the Dall porpoise usually eats about 28-30 pounds of food daily. Eating this much food helps them to have the energy they need to swim through the ocean at top speeds.

Scientists believe that when a member of a shoal of porpoises finds prey it lets the other members of the group know about it. This method makes hunting for a meal a lot easier for these incredible creatures.

Great White shark, orcas, and dolphins are predators of the porpoise. Orcas and sharks have strong jaws and are easily able to subdue a porpoise. Dolphins are fast swimmers and are known to attack porpoises on occassion, although the reason for the aggression is unclear.

Porpoises can also become tangled in commercial fisherman’s nets where they can be injured or die. They may swim into them while chasing prey or simply swim into one accidentally. Another human-based threat to porpoises is water pollution. Chemicals and plastics are harmful if ingested by porpoises, making them very ill or resulting in death.

Since porpoises live in coastal areas, they hear a lot of noise from ships, boats, and other watercraft. The noise echoing underwater can interfere with the communications of porpoises and harm this animal’s hearing. So, noise pollution is counted as a threat to the existence of these animals.

Porpoises mate throughout the year, but scientists have found more mating activity occurs in the spring and fall seasons. This holds true for dolphins as well.

Male porpoises mate with several females each year. However, a female only has young every two to three years. The gestation period of a female porpoise is 10 to 11 months.

A female porpoise gives live birth to one baby also known as a calf or pup. She gives birth as she swims through the water and sometimes the birth can take two hours. The porpoise calf comes out tail first. After it is born, the calf stays with its mother and nurses as they both swim along. The father is not involved in caring for the baby.

A porpoise calf is nursed for about eight months and slowly learns how to capture fish during this time. It is fully weaned by about 24 months of age.

There is a special relationship between a mother porpoise and her calf. The calf may stay with her from three to six years as it learns how to become a strong swimmer and survive on its own. The process of learning to stay afloat and swim after prey isn’t easy, so a calf needs a lot of guidance from its mother.

Porpoises can live for up to 23 years. The overall health and strength of a porpoise as well as the number of predators in the area can have an effect on its lifespan.

The Burmeister’s porpoise conservation status is near threatened and the narrow-ridged finless porpoise is endangered. Some species are limited or decreasing in certain areas, for example, the population of the narrow-ridged finless porpoise in the Yangtze River is about 1,000 and decreasing. And the population of the Indo-Pacific finless living off the coast of Hong Kong is around 200.

However, the vaquita is actually the most endangered porpoise – and marine mammal – in the world, with a status of critically endangered. There are thought to be less than 19 vaquita porpoises left in the world, located only in the Gulf of California. And their population is decreasing. Multiple vaquitas are killed by boats each year and pollution is another major threat, according to the IUCN.

View all 38 animals that start with P

What is a porpoise?

A porpoise is a mammal that lives in coastal waters including rivers, bays, and estuaries. It breathes through lungs, gives live birth to pups, and can swim up to 34 mph.

What is the difference between a porpoise and a dolphin?

Looking at a photo of a porpoise and a dolphin, you may think you’re looking at the same animal. But there are differences between them.

For one, dolphins are larger than porpoises. A dolphin’s body is slender and long while a porpoise has a body that is thicker and more stocky. Also, while porpoises have spade-shaped teeth, dolphins have teeth shaped like cones. The dorsal fin on the back of a porpoise looks like a triangle while the tip of a dolphin’s dorsal fin hooks backward.

Finally, a dolphin has a beak-like nose while a porpoise has a rounded head and shorter nose.

Are porpoises omnivores, carnivores, or herbivores?

Porpoises are carnivores eating crustaceans, fish, squid, and octopus. They swallow their food whole instead of chewing it.

Porpoises are not dangerous unless you’re a fish swimming in the ocean! They are social with one another, but try to avoid humans.

Is a porpoise a fish?

No, a porpoise is not a fish. Porpoises are warm-blooded mammals. It’s true that porpoises live in the ocean, but they don’t breathe through gills like fish do. Porpoises have lungs that must take in oxygen.