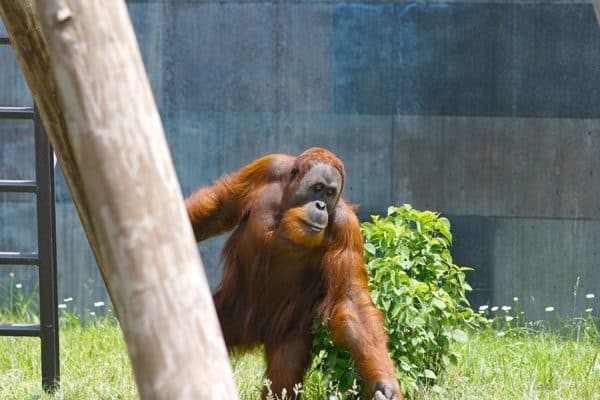 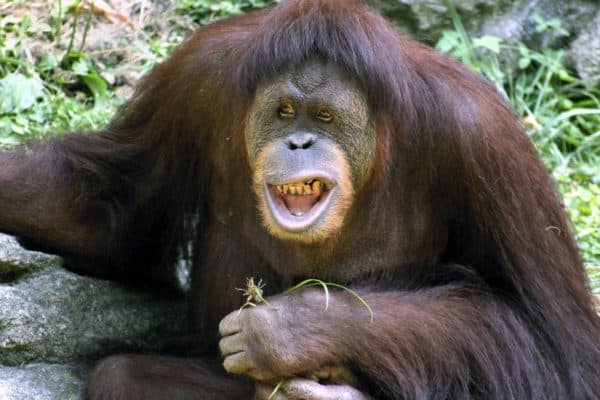 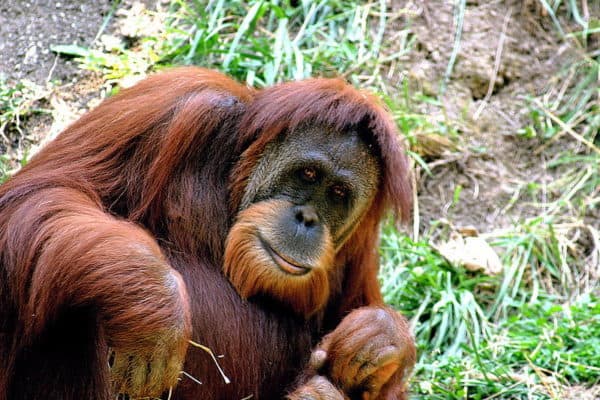 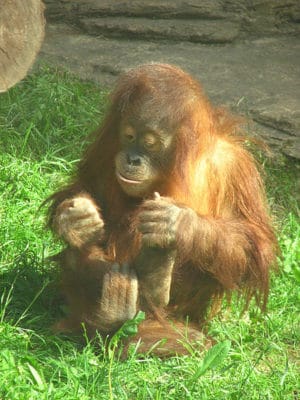 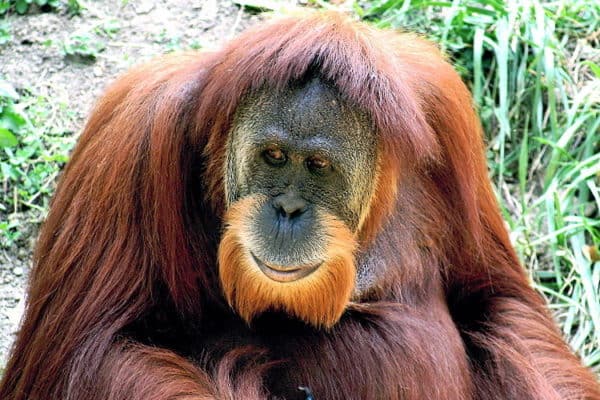 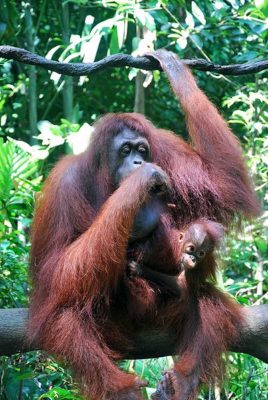 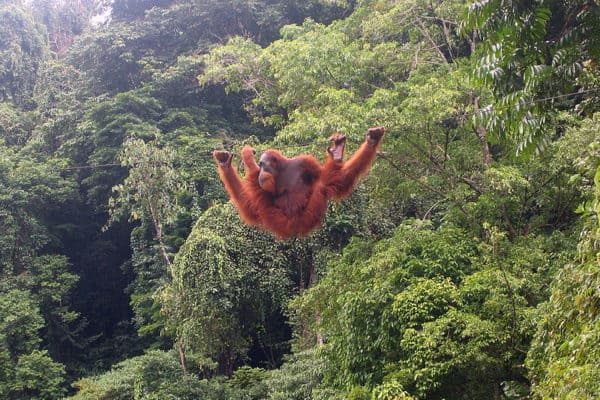 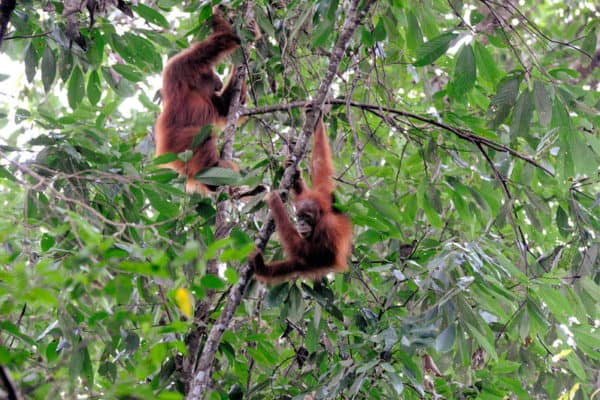 The Sumatran Orang-utan would have once been found widely distributed across the island of Sumatra, but are today confined to the most northern parts. The remaining wild Sumatran Orang-utan populations are almost all found in just once province right on the northern tip of the island, where they inhabit the dense and humid tropical forests. Preferring lowland valley forests as there is more of a variety of food, Sumatran Orang-utans can also be found at higher altitudes with a few small populations known to exist above 1,000 meters above sea level. Due to the fact that they are almost exclusively arboreal animals, the Sumatran Orang-utan relies heavily on the surrounding forest and has therefore been severely affected by the loss of much of it. Populations have dramatically decreased over the past century, mainly due to habitat loss in the form of deforestation for logging and to clear land for palm oil plantations.

The Sumatran Orang-utan leads a very solitary lifestyle, moving slowly through the trees during the day in search of food. Sumatran Orang-utans spend up to 60% of their time foraging for and eating food and although they are known to occupy large home ranges, they rarely travel more than half a mile a day. At night, the Sumatran Orang-utan builds a nest high in the canopy by folding branches over where it sleeps during the night. Sumatran Orang-utans are not greatly territorial and are known to loosely share their home ranges with other individuals and can even be found feeding in the company of one another around particularly abundant fruit trees. Males though stake their claim on their home by emitting long-calls, which are deep calls that come from their throat poach and echo through the surrounding forest to both attract females to mate with and to warn off potential rivals.

After a gestation period that last for around nine months, the female Sumatran Orang-utan constructs a new nest in the tree top where she gives birth to a single infant. The young Sumatran Orang-utan clings onto its mother's hair for safety and never leaves her side for the first few years. Although Sumatran Orang-utan infants are often weaned by the time they are three years old, they will not leave their mother for another few more years at least as she teaches her young special skills for surviving in the forest. Sumatran Orang-utans breed more slowly than any other primate with females having a maximum of three young during their whole life, which means that in areas affected by both hunting and habitat loss populations take a very long time to then recover.

The Sumatran Orang-utan is an omnivorous animal meaning that is forages for and eats both plant matter and other animals in order to survive. However, the majority of the Sumatran Orang-utan's diet is made up of fruits that are picked from the surrounding trees. The intelligence of the Sumatran Orang-utan is obvious in these situations as they are known to make a mental map of their surrounding jungle patch and are therefore able to know not only where the fruit trees are, but also when there fruits will ripen. Along with consuming both ripe and unripe fruits which are easily peeled using their agile and nimble fingers, Sumatran Orang-utans also eat a variety of other plant matter such as fresh buds and shoots along with insects, eggs and small vertebrates on occasion. Sumatran Orang-utans get the majority of their liquid from the vast amount of fruit that they eat but are also known to drink from water sources, collecting it in their cupped hands.

Historically Sumatran Orang-utans would have been threatened by numerous predators on the forest floor and have therefore evolved to exist almost only high in the trees. The most prolific natural predator of the Sumatran Orang-utan is the Sumatran Tiger but their numbers have also declined drastically across the island due to hunting and habitat loss. Since their arrival in Indonesia, modern Humans have hunted the Sumatran Orang-utan, killing the parent and capturing the young to sell into the exotic pet trade. Although hunting has devastated populations in certain areas, it is the loss of vast areas of their unique natural habitats that has been the biggest threat to Sumatran Orang-utans and because of their slow-developing nature, has meant that populations are really struggling to recover.

The Sumatran Orang-utan (along with the Bornean Orang-utan and the Tapanuli Orang-utan) is one of Humans' closest living relatives and we in fact share 96.4% of our DNA with them. Sumatran Orang-utans are in fact so man-like in both their appearance and behaviours that their native Malaysian name Orang Hutan literally means "Person of the Forest". Although all three Orang-utan species are very solitary primates, the Sumatran Orang-utan is actually more sociable than its slightly larger cousin in Borneo as they are seen more often in family groups and gathering in areas where there is food or fresh water in abundance. Like a number of other great apes, Sumatran Orang-utans are highly intelligent animals that are known to use tools in the wild including using sticks for extracting honey and putting leaves on their hands and feet to protect them in thorny vegetation. The exact skills seem to be dependent on the individual population suggesting skills are taught to young rather than being inherited.

Orang-utans would have once been found throughout south-east Asia but are today confined to just two islands in Indonesia. This can only have been caused by increasing levels of Human activity throughout their vast historical range, and has led to the extinction of the Orang-utan in numerous regions. Over the past century in particular, the capture of young Sumatran Orang-utans to be sold either to zoos or into the exotic pet trade has led to drastic population declines particularly as this often results in the death of the mother who trying to protect her infant. Deforestation has also obliterated populations throughout both Sumatra and Borneo from logging to collect the rare, tropical timbers and also to clear vast areas of ancient forest and peat-swamps to make way for the increasing number of palm oil plantations.

Today, the Sumatran Orang-utan has been listed by the IUCN as an animal that is Critically Endangered in its natural environment and therefore faces extinction in the wild in the near future if the situation progresses as it is. Although forest clearance in south-east Asia did appear to be slowing down, the increasingly levels of demand for both tropical timber and cheap palm oil seem to have accelerated the situation once again. These activities are often conducted illegally and in areas where the last remaining Sumatran Orang-utans exist. It is estimated that there has been an 80% decline in Sumatran Orang-utan population numbers in the past 75 years with as few as between 3,000 and 5,000 individuals thought to be left in the wild.

How to say Sumatran Orang-utan in ...