10 Animals That Came Back From Extinction

How do you save a dying species? It’s an important question that troubles conservationists around the world. Currently, the IUCN indicates 41,415 species on its Red List, with 16,306 endangered animals threatened with extinction. Climate change, habitat loss, poaching, and natural predation threaten many of these species.

While some species receive significant attention, such as the almost extinct northern white rhinoceros, others disappear with hardly anyone noticing. However, everyone once in a while, some animal populations manage to recover. These success stories of conservationism give people everywhere hope that more species can also be saved. Here are 10 animals that came back from extinction.

The bald eagle (Haliaeetus leucoephalus) is the national bird of the United States and one of the most recognizable eagle species in the world. Yet, these mighty birds of prey are yet one of many animals that came back from extinction in the 20th century. Estimates of their population during the early 18th differ but range between 300,000-500,000. Unfortunately, the use of the pesticide DDT, habitat loss, illegal shooting, and pollution significantly reduced their numbers. By the 1950s, only 412 nesting pairs remained in the entire 48 contiguous states.

To prevent their extinction, Congress passed The Bald and Golden Eagle Protection Act of 1940, which prevents the hunting or shooting of bald eagles. Bald eagles received further protection after they were declared an endangered species in 1967. Thanks to a concerted effort by government agencies and conservation groups, bald eagles once again thrive across North America. Today, scientists estimate that more than 316,7000 individual birds live throughout the lower 48 states. With such a remarkable recovery and strong protections still in place, the IUCN lists the bald eagle as a species of Least Concern.

The blue whale (Balaenoptera musculus) is the largest species of whale and also the largest animal on Earth. These majestic creatures can reach 98 feet in length and weigh up to 199 tonnes. While they once roamed throughout nearly every ocean, they faced extinction near the end of the 20th century. Rising demand for whale meat and oil, as well as advancements in boating and fishing technology, led to widespread hunting that decimated their numbers. From 1900-1970, whalers killed nearly 380,000 blue whales, leaving only 0.2 percent of their initial population remaining.

Blue whales began receiving protection in 1939, but it wasn’t until 1966 that they received complete protection under the International Convention for the Regulation of Whaling. Thanks to these efforts, their population is slowly increasing, with a global estimate in 2018 between 5,000-15,000. However, they continue to face both natural and manmade threats. These dangers include ship strikes, entanglement in nets, ocean noise, pollution, and predation by killer whales. Although their population is increasing due to these ongoing threats, the IUCN lists blue whales as an Endangered species.

Also known as the American buffalo, the American bison (Bison bison) is one of the most well-known animals that came back from extinction in North America. For thousands of years, bison roamed throughout the great bison belt, a tract of land stretching from Alaska to the Gulf of Mexico. They became a symbol of the Old West and served as an essential source of food and resources to many Native American tribes. However, during the 19th century, bison almost went extinct due to commercial hunting and widespread slaughter. Their population plummeted from over 60 million in the late-18th century to only 541 animals by 1889.

Since then, multiple reintroduction campaigns have attempted to restore their population, many of them spearheaded by native tribes. Of these efforts, the Inter-Tribal Bison Council represents one of the most significant. Today, over 300,000 bison live throughout North America, primarily on private land. In addition, roughly 15,000 bison live in the wild on unfenced public land and in nature preserves. Although their population is much larger than a hundred years ago, it is still nowhere near its historical height, and their range is severely diminished. As a result, the IUCN lists bison as a Near Threatened species.

Historically known as the duck hawk in North America, the peregrine falcon (Falco peregrinus) holds the distinction as the fastest animal in the world. They dive down at incredible speeds during their hunting stoop that can reach up to 242 miles per hour. As a cosmopolitan species, they range throughout the world and live in varied climates and habitats. However, they became an endangered species during the mid-20th century due to the widespread use of pesticides, specifically DDT. Their population plummeted from over 7,000 to a few hundred in North America and from 8,000 to less than 1,000 in Europe. In fact, by 1963, not a single peregrine nest existed in the eastern United States.

Researchers soon realized that DDT thins out the calcium in animal’s eggs, thereby reducing the number of eggs that hatch. Once they came to this discovery, most countries quickly banned DDT and other organochlorine pesticides. In addition, to help the falcons recover, teams began to breed peregrines in captivity. Estimates now place the global population near 140,000, which prompted the IUCN to list the peregrine falcon as a species of Least Concern.

Colloquially referred to as the gator or the common gator, the American alligator (Alligator mississipiensis) is the largest reptile in North America. In addition, they represent one of the two extant species of alligator, the other being their smaller cousin, the Chinese alligator. Although they remain apex predators in the wild, few people know they count among animals that came back from extinction. Due to rampant hunting and wholesale slaughter, alligators almost completely disappeared from many of their natural habitats. By the 1950s and 60s, their numbers fell drastically in Louisiana, Florida, and throughout the rest of the southeastern US.

To combat this decline, the United States government listed the American alligator as an endangered species in 1973. In addition to stopping the hunting of alligators for their meat and hides, commercial farms began breeding them in captivity. Today, more than 5 million alligators live throughout the southeastern United States, with over 1.3 million in Florida alone. Thanks to this remarkable recovery, the IUCN lists the American alligator as a species of Least concern.

The Stellar sea lion (Eumetopias jubatus) is the largest member of the sea lion family. They used to live abundantly throughout the northern Pacific, ranging from Japan to California. However, for reasons as yet unknown, their western population near Alaska and the Aleutian Islands nosedived after the 1970s. By the 1990s, the population in the region declined between 70%-80% to a low of 18,000. Possible explanations include overfishing reducing their food sources, predation by sharks and orcas, and climate change.

The Galapagos giant tortoise represents a complex of 12 species of giant tortoises native to the Galapagos Islands. They are the largest living species of tortoise, capable of reaching weights up to 919 pounds. In addition to their large size, their other claim to fame is their long lifespan, as they can live up to 177 years old. However, despite their longevity, they almost went extinct in the 20th century. From the 16th century to the 1970s, their population decline from over 250,000 to around 3,000. This decline includes many factors such as overexploitation, habitat loss, and predation by invasive species.

Legal protections now restrict hunting, trade, and the export of Galapagos tortoises, and conservationists closely monitor their numbers. Nature preserves free of predators house many of the remaining tortoises. In addition, captive breeding programs established by conservationists work to help encourage reproduction between surviving members. With around 15,000 Galapagos tortoises worldwide, they count among animals that came back from extinction. However, the IUCN still lists them as Vulnerable due to their slow growth rate, late sexual maturity, and differences between island species.

In the past century, conservationists spent immense resources and time reviving the population. Today, nearly 19,000-21,000 south white rhinos live worldwide, particularly in South Africa. They represent one of the best examples of animals that came back from extinction. Although some now live in the wild, they primarily reside in zoos and on private game reserves. Despite this remarkable recovery, the IUCN still lists the southern white rhinoceros as a Near Threatened species due to threats from poaching and habitat loss.

The California condor (Gymnogyps californianus) is the largest vulture and land bird in North America. These giant scavengers used to range throughout the southwestern United States and into northwestern Mexico. However, their population declined significantly during the 20th century due to pesticides such as DDT, poaching, and habitat loss. By 1987, so few remained that scientists declared them extinct in the wild. At that point, only 27 condors remained, all living in captivity.

To save these iconic creatures, the United States government established captive breeding programs at select zoos across the country. The program grew into one of the most expensive conservation projects in the country’s history, costing over $35 million, including $2 million per year for upkeep. Despite its expense, the program continues to produce results, albeit slowly. As of 2019, the California condor population now includes 518 individual condors. Many birds have been reintroduced to the wild, although they are all tagged and closely monitored. Still, due to their numbers and the possibility of future threats, the IUCN lists the California condor as a Critically Endangered species.

The giant panda (Ailuropoda melanoleuca), also known as the panda bear or simply panda, is one of the most recognizable animals in the world. However, these iconic bears suffered extensive habitat loss in the 20th century. Combined with the effects of poaching, the panda population plummeted in the 1970s until only 1,000 individuals remained in the wild. Their limited diet – which consists 99% of bamboo shoots and leaves – makes them particularly susceptible to starvation. In addition, they reproduce infrequently, which means it is incredibly difficult for them to naturally recover if their population gets too low.

Over the past 50 years, the panda became the subject of one of the most intense and scrutinized conservation projects ever endeavored. The Chinese government established strict laws preventing the hunting or trade of pandas and established numerous reserves to help these animals that came back from extinction. Thanks to these efforts, estimates now place the number of pandas in the wild at around 3,000. While the IUCN no longer considers pandas as Endangered, it still lists them as a Vulnerable species.

Do Deer Eat Pumpkins? (And What You Can Do About It) 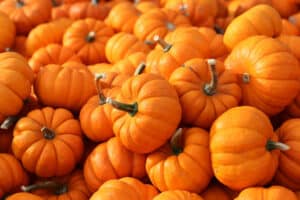