Have you ever wondered if there are animals that reproduce asexually? Sexual reproduction is by far the most common method of procreation in the animal kingdom. It’s been estimated that around 99% of all multi-cellular organisms engage in some form of sex. The ability to recombine DNA from two entirely different genomes is so common that it must confer numerous advantages to the offspring.

But the science of sex is notoriously tricky; there are multiple explanations for how it first arose. One hypothesis is that sex evolved as a kind of genetic sorter; it increases the likelihood that the offspring will inherit a good mix of beneficial genes from both parents. Another hypothesis is that sex helps to purge harmful mutations or changes from the genome. Yet another hypothesis is that sexual reproduction enables organisms to fight diseases better; thanks to the improved genetic variability, the offspring can “patch” exploitable vulnerabilities. Most likely, sex arose from a combination of all these factors.

Asexual reproduction, by contrast, dispenses with the entire business of genetic sorting. Whereas sexually reproducing animals need to spend a lot of time and energy searching for and courting a potential partner, animals that reproduce asexually can create new offspring, even identical clones, with incredible speed and ease. The lack of genetic diversity is a huge loss, but it can be very beneficial in the right circumstances.

Parthenogenesis, in which an unfertilized egg develops into a new individual without the need for sperm, is one of the most common forms of asexual reproduction in the animal kingdom. It has been observed to occur in about 70 species of vertebrates, plus numerous other invertebrates. Some of these species will be covered in the list below. It should be noted that asexual behavior should not be confused with hermaphroditic animals, like snails and earthworms, which have both male and female reproductive organs but otherwise reproduce sexually.

These fearsome marine predators were thought to reproduce entirely through sexual means. But lately, scientists have documented several cases of captive female zebra sharks and hammerhead sharks reproducing in the absence of suitable males. Subsequent DNA tests revealed that its genome was identical to the mother, which eliminated the already unlikely possibility that they were storing male sperm for several years. This form of animals reproducing asexually probably isn’t very common in the wild, because it reduces the amount of genetic diversity available to the offspring, which may eventually lead to inbreeding after a few generations. Nevertheless, in times of reproductive scarcity, this is probably a useful behavior to have.

Measuring about 10 feet long and weighing some 300 pounds, the Komodo dragon has been studied extensively for its interesting physiology and behavior. But for a long time, no one even knew they had the ability to reproduce asexually until two lone females suddenly became pregnant in 2006 at London’s Chester Zoo, setting the science news ablaze. This form of asexual reproduction is accomplished through a neat trick. Normally, when reproducing sexually, female dragons create four “pre-egg” cells. One of these will become the egg, whereas the other three are absorbed back into the body. But when the female produces asexually, one of these unused eggs can become a kind of surrogate sperm that contributes genetic material to the true egg.

What’s even more interesting about this particular form of asexual reproduction is that the children are not exact clones of the mother. They couldn’t be exact clones, because all of the offspring are male. This is due to a unique quirk in Komodo genetics. Whereas human males inherit two different kinds of sex-determining chromosomes (the so-called XY chromosomes), in Komodo dragons it’s the exact opposite. Two copies of the chromosome create a male dragon. Think of the sex chromosomes in terms of the letters Z and W. A ZW combination produces a female, ZZ produces a male, and WW produces an unviable egg. Essentially, because each of the egg cells is genetically identical, they can only form ZZ or WW chromosome combinations, not ZW, when they come together, so all viable offspring are male.

What adds to the intrigue of this story is that the WW rule may not be set in stone. In 2010, it was discovered that a boa constrictor was able to produce female WW offspring asexually by similar means. This was previously thought to be impossible. Unless it’s a rare fluke, the result suggests asexual reproduction may be more complicated in snakes and other reptiles than previously thought.

The whiptail is a family of lizards, most of them native to the Americas. At first glance, they look no more remarkable than your average reptile, but thanks to years of painstaking research, we now know that some species are 100% female animals with the amazing ability to reproduce asexually. This isn’t just a neat trick or a backup strategy either; it’s their main means of reproduction.

They were likely created from a hybridization event between two related species. While hybrids are normally infertile, they can sometimes quickly evolve as a means of asexual reproduction to survive. The main barrier to full parthenogenesis is the need to create a full complement of chromosomes in the absence of fertilization from a sexual partner. But some whiptails overcame this barrier probably in a single generation.

While no actual sex is ever involved, females do appear to engage in courtship rituals and mounting with each other, which appears to stimulate the fertilization process. However, without any new genetic variability coming in, it’s unclear whether these species would be able to adapt well to changing environments or circumstances. Their genomes are mostly static.

The aphid is a family of soft-bodied insects that suck the sap from the stems and leaves of plants. In many aphid species, the most common strategy is to alternate between asexual reproduction in the summer (which enables them to colonize new plants quickly) and sexual reproduction in the fall and winter to produce the next generation. The asexual offspring tends to be genetically identical to the mother, which means all of them are born female. The sexually produced offspring can be either male or female.

This all-female species of freshwater mollies has evolved a unique form of asexual reproduction. The name itself is a reference to the female warrior society of Greek mythology rather than the famous river habitat (they actually reside in the Rio Grande and Tuxpan Rivers near the US-Mexican border). What’s really unique about the Amazon molly is that it does, in fact, mate with the opposite sex, but only with a male from a closely related species. The sperm isn’t used to fertilize the egg or provide any genetic material; after all, it’s from a different species. Instead, its sole purpose is to trigger the egg to begin development. It’s not entirely clear why it does this or how it avoids the problem of genetic diversity. Estimates suggest that the species has been reproducing in this manner for some 100,000 to 200,000 years, long past the point of normal expectation, so it must have some way to maintain genetic variability.

Parthenogenesis is a fairly rare phenomenon in birds and mammals. But as far back as the 19th century, people began to document rare cases of domesticated fowl developing from unfertilized eggs, all of which became males. Based on more recent analysis, it’s estimated that only about one percent of them actually survive to become chicks, which obviously is not enough to affect genetic diversity, but people have managed to create a new strain of the domestic turkey with a higher survival rate for the unfertilized eggs.

The marble crayfish is one of the strangest evolutionary cases of recent memory. This purely asexual animal was thought to first arise from a weird mutation of a captive species in 1995. Soon this novel organism was given away to numerous other owners, some of whom released them back into the wild, where they spread rapidly and displaced some native crayfish species even as far as Madagascar. The marble crayfish is so successful at establishing new populations that it’s been banned in the United States and European Union.

Part of what makes it unique is the fact that the marble crayfish is the only known decapods crustacean that reproduces asexually, creating identical copies of the parent. This animal has an astonishing 276 chromosomes, or three sets of 92 chromosomes. Humans, by contrast, only have 46. There is a theory that it arose in the wild, but based on genetic analysis, it’s been suggested that the marble crayfish was created in captivity from the mating of two slough crayfish which originated in different regions of the world; one of its parents may have had two copies of the same chromosomes, giving it three in total. This was followed by further genetic modifications that made it asexual.

Some species of bees and wasps have the ability to produce unfertilized eggs that eventually develop into males. But the Cape honeybee is one of the few known species that can also generate new females via the process of parthenogenesis.

Sponges are among the most basic organisms in the animal kingdom, so it’s no surprise that many of them reproduce through asexual means. The main strategies are to grow a new copy directly from its own body, like a bud, or to produce a mass of new cells called gemmules.

Like aphids, many stick insects have the ability to switch between sexual and asexual reproduction, depending on the circumstances. Parthenogenesis will only result in female copies, so it still needs to mate sexually at some point in its life. The common Indian stick insect, so often kept as a pet, is largely parthenogenetic in nature.

Next up: These 14 Animals Have the Largest Eyes in the World

Cassowary Speed: How Fast Can These Giant Birds Run? 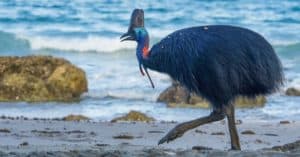