Anteaters aren’t aggressive, but they can fight. Jaguars love feeding on young giant anteaters. But once the anteaters grow up, the wildcats stay away. Sometimes an anteater might run away from a jaguar or puma, but other times they’ll stand up and fight. Lashing out with their dangerous knife-like claws, the anteater has the potential to slay even the largest of predators. What else should you know about these fantastic animals? Read on to learn 10 incredible anteater facts.

First on our list of incredible anteater facts, let’s talk about their excellent sense of smell! An anteater’s snout can smell 40 times better than a human nose. Their heightened sense of smell is a big help since anteaters don’t have the best hearing or sight.

Anteaters use their noses to identify different termite and ant species before they rip open the nest. It’s almost as if they’re deciding what bug flavor they’d like to dine on. Other animals with an acute sense of smell include elephants, snakes, and cows.

Back in 2019, volunteers worked hard to rescue animals from fire zones throughout the
Amazon. Over 35 days, volunteers were able to rescue around 70 different critters, including badgers, armadillos, and even a giant anteater that the staff named Valentina.

Sadly the fire had caused third-degree burns on Valentina’s paws. Immediately after arriving, she fell into an 18-hour coma. Despite the odds, the powerful anteater pulled through. Her miraculous recovery was inspirational throughout the rescue center.

A baby anteater born in a Connecticut zoo stirred up a ton of questions when it appeared to come out of nowhere. The zookeepers had no idea who the baby anteater’s father was! It turns out, the anteater had a fertilized egg it was saving. This is a process called embryonic diapause.

The anteater can take a fertilized egg and store it for later use. The egg remains in the anteater’s uterus until the environmental conditions are perfect for implanting and developing. This is the first time the process was observed in anteaters, although it’s common in armadillos (a close relative).

Other animals can reproduce using a process known as parthenogenesis, where the baby doesn’t need a father. However, this process is most common with invertebrates like wasps and bees or certain vertebrates like amphibians and fish.

4. They’re Related to Sloths and Armadillos

Anteaters, sloths, and armadillos all belong to the same animal family. The ancient family of mammals is called Xenarthrans. It’s believed that this animal family is one of the oldest living groups of mammals today.

Armadillos and sloths changed diets before the adaptation to strict anteating took place. By becoming vegetarians and scavengers, their entire anatomy adapted differently. When looking at a picture of an anteater and armadillo side by side, you’d probably assume they have the closest connection. However, sloths are more closely related to anteaters than armadillos. Both sloths and anteaters belong to the order Pilosa.

5. There Are Giant Anteaters

There’s a species of anteaters called giant anteaters! These large mammals can weigh anywhere from 40 pounds all the way up to 140 pounds. They can also range from about 6 to 49 inches size from their head to the rest of their body. The tail itself of a giant anteater can be as long as 7 to 35 inches long! A full-grown giant anteater could easily be mistaken for a bear.

6. There Are 6 New Tiny Anteater Species

Next our list of incredible anteater facts; six new mini-species just came to light! Scientists used to believe that silky anteaters made up a single species. However, research is now revealing that the population is comprised of seven unique species.

That’s right; there are six new mini anteaters species that were hiding in plain sight. The new species were discovered while studying silky anteaters in Brazil. These adorable tree dwellers were an overlooked species for quite a while.

Thanks to the hard work of scientists and researchers, they were able to use skull measurements and genetic material to piece together the mystery. A genomic and anatomical analysis finally confirmed each distinct set.

7. They Don’t Have Teeth

Anteaters are toothless! They’re a type of edentate animal which means they don’t have any teeth. How do anteaters eat more than 35,000 termites and ants a day without any teeth then? Since they don’t use their teeth to break up their food, anteaters rely on strong muscles and digestive juices to break down each meal. They also use super long tongues to scoop up their tasty insect snacks.

Another incredible anteater fact is that their tongues can stretch out super far. That’s right, the giant anteater can reach its tongue out 2 feet to snag a snack. If you ever get a chance to watch an anteater chow down, don’t miss it. Along with stretching, they can flick their tongue super-fast, too. They’ll move it in and out of their mouth approximately 150 times each minute.

9. Pups Ride On Their Moms Back

Anteaters have a special relationship with their young. Since females only have a single offspring each year, they can devote all of their time and attention to one child. It creates the perfect opportunity for the female to spoil their only child.

For instance, it’s normal to see an adorable anteater pup riding around on its mother’s back, even if it can walk. They also spend a long time with their mother. Unlike other mammals who might only spend a year with their offspring, anteater pups stay with their mother for two years. Once they’re fully grown, they can strike out on their own.

10. Anteaters Have a Misleading Name

An anteaters name doesn’t do them justice. True, they enjoy gobbling up an ants, but that’s not the only thing they’ll snack on. Anteaters in Central and South America also eat beetles, bee larva, termites, and other insects. There’s even a species of anteater in the wilds of Panama that primarily eats fruit. 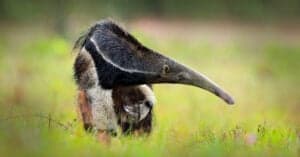