iStock.com/Jenhung Huang
Share this post on:
More Great Content:
Clouded Leopard Teeth: Everything You Need To…
The Biggest Alligator ever Found in South…
Lake Mead Is So Low It's Revealed…
Discover the Little-Known U.S. River Gorge That's…
The 5 Healthiest Vegetables Dogs Can Eat…
10 Spiders in Indiana

The clouded leopard is a medium-sized wild cat that is quite shy. Not much is known about these particular wild cats. This is because they are nocturnal and rarely ever seen by humans. The primary knowledge we have about them comes from those who are kept in zoos in captivity. These cats can be found living in tropical forest habitats throughout the Himalayas and Southeast Asia and China. They are separated by two different species, the clouded leopard and the Sunda clouded leopard.

Join us as we go over 10 incredible clouded leopard facts that will absolutely fascinate you!

The clouded leopard is a very elusive creature. Their climbing ability is excellent, and they will go out of their way to climb trees and walk among the branches. It’s common for them to rest on top of these trees during the day and hunt at night. Their tails are very long and they use them to maintain their balance when climbing. The clouded leopard’s paws are also incredibly flexible and they can rotate them to make their way back down tree trunks. Their paws also help with hanging upside down.

The clouded leopard practices polygyny, which means that one male cat mates with several female cats. After mating, males leave and don’t stay around to help with cubs. Clouded leopards have a gestation period of around three months and will give birth to one to five cubs. For the first 10 days, clouded leopard cubs are blind, and after about 5 weeks, their mothers begin to teach them how to hunt. At 9 months, a clouded leopard will then decide to leave its mother to become independent and find its own territory.

4. Clouded Leopards Have Some Of the Largest Teeth in Proportion To Their Bodies

Although these animals are quite small compared to other big cats, their bite is not one to mess around with. Its teeth and strong jaw allow it to take down prey much larger than itself. Clouded leopards have 32 full-grown teeth and the upper canines can grow up to 2 inches in length. Their canine teeth are about the size of a grown tiger, which is significantly bigger than a clouded leopard. Not only do they have incredibly sharp teeth, but they also have the ability to open their mouth to a whopping 100 degrees. Their teeth are excellent at gripping food, and they will bite on the back of a prey’s neck to kill it.

Unlike other wild cats, clouded leopards actually cannot roar. The absence of a fully ossified hyoid bone also prevents them from purring. The hyoid bone sits in the back of the throat and provides the support needed for the tongue and larynx. This bone is what allows these cats to make certain vocalizations. Clouded leopards can still hiss and growl as a form of communication.

6. Clouded Leopards Get Their Name Due To Their Appearance

Another fun clouded leopard fact is that clouded leopards are named after the cloud-like spots along their body. They have a beautiful coat that is a pale yellow with dark brown/black spots and markings. Their fur is incredibly important and serves as a sort of camouflage. They use the colorings of their body to easily blend into their surroundings when hunting during the night. Clouded leopards have a large dark band running from their eyes to their cheeks down to their neck.

The clouded leopard eats meat, which means it is a carnivore. Clouded leopards are incredible hunters. They have superb hearing that allows them to locate their prey. They hunt both on the ground and among the trees. They’re incredibly good at stalking and have night vision that is six times better than that of a human. Clouded leopards have pupils that are different from other cats. While most cats have sharp slit-like eyes, the clouded leopard’s eyes remain oval. Their prey consists of boars, monkeys, deer, and squirrels. Since they can climb trees they even go out of their way to eat birds as well.

Clouded leopards are very solitary animals and will only interact when it comes to mating. They enjoy living on their own and are very territorial. The clouded leopard uses its urine to scent mark its territory in order to keep out other cats. Only when a mother takes care of her cubs will you see clouded leopards living together as a family.

The population of the Clouded Leopard is slowly dwindling. This is due to the fact that their habitats are being destroyed and poachers hunting them. There are laws made to protect Clouded Leopards but they are still being hunted for their fur. While many zoos house clouded leopards as well, the researchers found that many of them suffer from common and significant causes of morbidity and mortality.

According to a study of 271 clouded leopards in 44 zoos in Europe, Asia, and Australia, 17% died from respiratory diseases, 12% from maternal neglect and starvation, 10% from generalized infectious diseases, 10% from digestive diseases, and 10% from trauma. Considering how solitary these creatures are and elusive, to this day scientists do not really know the exact number of clouded leopards that are left in the wild. 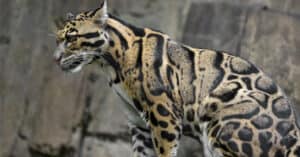 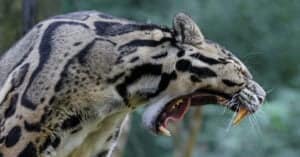