Arunee Rodloy/Shutterstock.com
Share this post on:
More Great Content:
Discover the 10 Largest Seahorses in the…
What Do Seahorses Eat? 15+ Foods They…
See 'Dominator' - The Largest Crocodile In…
See a Wildebeest Launch Itself Over Two…
Scientists Discover New World's Largest Omnivore --…
Watch These Elk Ramming Cars at Yellowstone,…

Seahorses may look like mythological underwater horses, but these unique animals are actually fish! These magical creatures have adorably curly tails and unusual horse-shaped heads, as well as fascinating lives filled with romance, mystery, and intrigue. Although they are commonly found in coral reefs, seahorses live in many other sheltered areas within temperate and tropical saltwater, like estuaries, mangroves, and seagrass beds.

Seahorses are part of the fish family Syngnathids and are closely related to pipefish, trumpetfish, and sea dragons. Their scientific name, “hippocampus,” literally means “horse sea creature” in Greek. So far scientists have discovered at least 45 different species of seahorses in all different shapes, sizes, and colors. The pygmy seahorse, for example, is only ½ inch long, while the big-belly seahorse can grow up to 14 inches in length! However, there is so much more to these unique fish beyond just their uniquely aquatic-equine appearance. Here are 10 incredible facts about seahorses!

The first incredible fact is that seahorses may look small and delicate, but these curious fish can withstand high levels of crushing forces that would kill any other creature their size. This is because seahorses come with their own built-in armor. Seahorses are bony fish, but their vertebra is protected with ring-shaped bony plates that run along the entire length of their bodies like a long series of flexible armor-like shields.

If a seahorse is squeezed or compressed, these bony plates slide past one another to spread out the pressure. In addition, these bony plates are made up of only about 40% minerals, and 60% organic composites and water. Because of this, they are much less brittle than other animal bones (cow bones, for example, are about 65% mineral). A seahorse skeleton will bend and distort, but it is very difficult to break. In fact, engineers are trying to replicate the unique design of seahorse bodies for biometric robotics.

Even though a seahorse is a fish, its body is not shaped like a typical fish at all. Seahorses have long curly tails, elongated snouts, horse-shaped heads. They are also the only type of fish that has a neck! Seahorses swim with their bodies upright and without a tail fin to help propel them through the water. Instead, their tiny dorsal fins do all the work, so seahorses swim very slowly. In fact, the Dwarf Seahorse holds the Guinness World Record for being the slowest fish in the entire world! This small seahorse can only swim as far as five feet per hour!

A really amazing fact about seahorses is that although they may not be very good long-distance swimmers, they have excellent swimming skills when it comes to maneuverability. Seahorses can move in more than one direction: they can swim forwards and backwards, as well as downwards and upwards. This helps them to expertly maneuver through coral, dense vegetation, and rock formations with ease.

Seahorses are technically fish, but they certainly do not look the part. Instead of a tail fin, seahorses have prehensile tails like monkeys. Their tails are very flexible and can grab onto objects like seagrass, rocks, and coral. Using their tails, seahorses can securely anchor themselves when they need to rest or when they are hunting. Seahorses can also grab onto floating objects to help them travel further like tiny fishy hitchhikers. Sometimes seahorses even link their tails together so that they do not lose their mates in turbulent waters.

5. Seahorses Eat a Lot—But They Don’t Have a Stomach

The digestive system of a seahorse is very simple—it doesn’t even include a stomach! Without a stomach, however, seahorses do not have room to store food, so it passes through their system very quickly. Because of this, seahorses eat almost all day long! They are constantly eating other tiny fish, brine shrimp, and plankton. In fact, a single seahorse can eat 3,000 brine shrimp in a single day!

Seahorses do not have any teeth, however. Instead, they have uniquely fused jaws with very narrow snouts. Their narrow snouts act like a powerful vacuum head, allowing seahorses to quickly suck up food. Although seahorses are not fast swimmers, they are extremely stealthy. As ambush predators, seahorses often wrap their tails around seagrass or coral like an anchor, and then wait for small prey to come close enough to suck up with their long, streamlined snouts.

Seahorses are masters of camouflage and can even change color to blend in with their environment. Some species of seahorses can even change their body shape to better match their surroundings. These skills aid seahorses as they stalk and ambush their prey, making them very skilled hunters. In fact, seahorses have a predatory kill rate of about 90%!

Seahorses can also change colors based on their emotions, as well as to communicate to one another. Part of their mating ritual involves this unique color-changing ability as well.

7. Seahorses Can Move Their Eyes Independently

Seahorses can move their two eyes independently from one another. For example, a seahorse could have one eye looking to the left, while the other is looking to the right, much like a chameleon. This helps seahorses to see a wider range around them, so they can keep an eye out for potential prey, as well as avoid predators without having to move or draw attention to themselves.

8. Seahorses Have Their Own Unique Version of Human Fingerprints

Many species of seahorses are monogamous, and even check in with one another each day to reaffirm their bonds with unique clicking sounds and dances. While both female and male seahorses work together to produce the next generation of offspring, the burden of the pregnancy actually falls to the males. The female seahorse produces eggs, but rather than laying them in a nest or incubating them in her body, she passes them over to her partner! The male seahorse then fertilizes the eggs and stores them in a kangaroo-like pouch in his body. That’s right: one of the most incredible facts about seahorses is that the fathers are the ones that give birth!

While the male seahorse is pregnant, the female can get back to work producing more eggs, so together they are able to produce much quicker than many other fish species. When the baby seahorses hatch, the father births them out into the sea. Depending on the species of seahorse, a male seahorse could give birth to as few as 5 or as many as 1,000 babies at a time! This is beneficial for seahorses, because very few of their offspring survive to adulthood.

Several seahorse species are endangered or vulnerable to extinction. Although a single seahorse couple could produce over 1,000 babies at a time, only 0.1%-0.5% of their offspring actually survive to adulthood. As soon as they are born, baby seahorses are on their own and must hide from predators. Additionally, monogamous seahorses can take a long time to find a new mate again if their first mate dies.

In addition, seahorses’ habitats—coral reefs, seagrass beds, and mangroves—are sensitive ecosystems that are commonly threatened by pollution and ocean trash. An example of this was published by photographer Justin Hofman, whose famous photo captured a small seahorse clinging to a Q-tip while out at sea.

In many countries like Korea, China, and Japan, seahorses are often hunted for Asian medicine, as some people believe that they can be used to treat ailments like asthma and pain. Seahorses are also regularly hunted to be made into popular souvenirs or captured for aquariums and the pet trade. Unfortunately, seahorses are too often harvested faster than they can produce, which depletes their numbers significantly. 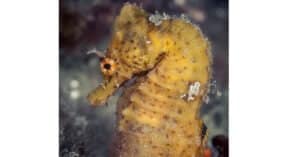