Written by Jeremiah Wright
Updated: January 24, 2023
© Dotted Yeti/Shutterstock.com
Share this post on:
More Great Content:
Woolly Mammoth vs Mastodon: What are the…
How Did Mammoths Go Extinct?
News: $15m Raised To Resurrect The Woolly…
See 'Dominator' - The Largest Crocodile In…
See a Wildebeest Launch Itself Over Two…
Scientists Discover New World's Largest Omnivore --…
↓ Continue Reading To See This Amazing Video

The woolly mammoth (Mammuthus primigenius) is one of the species of extinct mammoths that’s roughly the same size as modern African elephants. Woolly mammoths lived during the Pleistocene and Holocene geological epochs until their extinction, which means they were still around when the first humans emerged on the planet. They were the last of nine species of mammoths.

You’d probably need a winter coat even during summer if you stepped out 20,000 years ago, when humans co-existed with the now-extinct group of mammoths. Woolly mammoths lived in the far north at a time when the Earth was experiencing an ice age. That was when ice covered large parts of Europe, Asia, and North America.

Presently, we still seem to have a deep connection with woolly mammoths, as we do with elephants. We want to see these majestic creatures walking across the permafrost of the north again! Their bodies have been well preserved in the permafrost, where scientists are now becoming interested in resurrecting this species-but let’s not get our hopes up!

This article will look at ten incredible facts about the woolly mammoth to help ignite your imagination.

Early societies, like the Neanderthals in central Europe, used woolly mammoth bones to build houses. A mammoth bone dwelling was typically an oval or circular structure with walls heavily stacked with large mammoth bones. The bones were often modified to be implanted deep into the soil, allowing them to be lashed together.

The earliest mammoth dwellings dated back between 14,000 and 20,000 years ago. The oldest was found 30,000 years ago in the Moldova site, a Neanderthal Mousterian occupation situated on the Dniester River in Ukraine.

According to scientific reports, the woolly mammoths have more genetic similarities with elephants. It’s believed that woolly mammoths and elephants shared a common ancestor that split into separate species around 6 million years ago.

This similarity to elephants is another incredible wooly mammoth fact. Like elephants, woolly mammoths had tusks, gave birth in the same way, ate the same food, and lived in similar groups. However, they also had several distinctions. The woolly mammoth’s ears were shorter than those of an elephant. Their tusks were also more extensive and much curlier than elephants’ tusks.

Believe it or not, there were still woolly mammoths living when King Tut ruled the Egyptians; that’s around 3,600 years ago. While other mammoths went extinct about 10,000 years ago, some stuck around for thousands of years, living in isolated island locations—the last woolly mammoth inhabited Wrangel Island off the coast of Russia.

4. Woolly Mammoths Were Not the Only “Woolly Animal” During the Pleistocene Epoch

5. Woolly Mammoths Were Smaller Than All the Other Mammoth Species

All mammoths were giant. They were 9 to 11 feet tall and weighed approximately 5.4 to 13 tons. Steppe mammoths (Mammuthus trogontherii), which happen to be the biggest mammoths, weighed more than 8 tons and were 13 to 15 feet tall at the shoulder. As compared to all the mammoths, woolly mammoths were around 9.5 feet at the shoulder and weighed about 6 tons, which is approximately the size of modern African elephants.

Their connection with humans stretches beyond that of predator and prey. The ancient people used woolly mammoths for almost everything imaginable: food, shelter, tools and art. Woolly mammoth fur was used to make blankets and coats to keep the cold out in icy environments. Mammoth-tusk ivory was used to create different things—from sculptures of animals and humans to arrows and tips of spears. A mammoth flute was even discovered in southwestern Germany.

7. The First Documented Woolly Mammoth Skeleton Was Discovered in 1799

In 1799, a hunter discovered a woolly mammoth skeleton entombed in permafrost on a river bank in Siberia. In 1806, the skeleton was taken to the Zoological Institute of the Russian Science Academy, where they put the pieces together.

This was the first time the Russian Zoological Museum, led by Wilhelm Gottlieb Tilesius, managed to reconstruct the skeleton of an extinct animal, except for one error. Tilesius placed the tusks in the wrong sockets, such that they curved outward instead of inward.

8. Woolly Mammoth Lived in the Frozen and Steppe Tundras

Woolly mammoths were comfortable enough to stay in an extremely cold environment. They were adapted to the cold and thrived during a series of ever deeper ice ages. However, they didn’t spend their entire time on the frozen tundra. They also populated the steppe tundras, spanning from northwestern Canada and extending up to the west of Europe and as far as south into sunny Spain.

9. A Warming Climate Contributed to the Woolly Mammoth’s Extinction

Apart from being hunted by humans, woolly mammoths may have suffered from a warming climate. Habitats changed when temperatures warmed, causing lakes to become shallower, leaving woolly mammoths nothing to drink. The changes happened so quickly that the mammoths could not adapt and evolve.

10. Scientists Say They Could Bring Back Woolly Mammoths!

Scientists are working towards bringing back woolly mammoths. They would first need to sequence the woolly mammoths’ genome, edit the DNA of a close living relative to match it, make the embryos with the revised genome, and then bring them to term in a living surrogate mother.

In 2021, a team of scientists and entrepreneurs announced that they had already started a new company named Colossal that aims to genetically resurrect the woolly mammoth and place them back on the Siberian tundra. 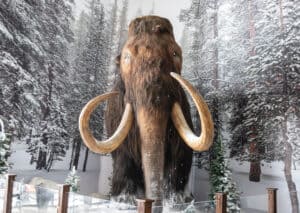