Every adventure lover definitely has a list of the most beautiful Islands in the world they’d love to visit someday. Most Islands seem like beautiful places – at first glance. But appearances can be deceiving. Behind the beautiful scenery and serene environment, a great deal of danger may lurk. With cadres of deadly snakes, toxic gases in the air, infectious diseases, hungry crocodiles, and various degrees of nature’s worst horrors, you definitely don’t want to be washed ashore or stranded on these dangerous islands.

This article will explore the 10 most dangerous islands in the world that you should absolutely stay away from…or perhaps, pray never to find yourself on.

Ilha da Queimada Island is popularly known as the “Snake Island” because it has the highest concentration of venomous snakes anywhere in the world. In fact, Ilha da Queimada is the only place you can find the deadly golden lancehead pit viper, Bothrops insularis – as many as 2,000 to 4,000 species! These vipers’ venom can cause human flesh to melt and can kill within just an hour.  Because of how dangerous Ilha da Queimada is, it is closed to the general public. Legends say the last lighthouse keeper that inhabited the island with his family died when snakes slithered into his house through the windows – a tale scary enough to keep anyone away from Ilha da Queimada forever.

Visiting the island of Poveglia, located between Venice and Lido in the Venetian lagoon of northern Italy, is illegal. Locals and tourists are prohibited from visiting. What makes Poveglia island so dangerous?

It is referred to as the most haunted place in the world. Legends have it that thousands of years ago, the island was used as a quarantine station for people suffering from the bubonic plague – the Black Death, where they were left to die. It was also used as a mental hospital, where disreputable doctors performed all kinds of heinous experiments on patients. Since the closure of the hospital in 1968, the island has remained vacant. According to reports, a visit to this haunted island of spooky terror will have you pissing your pants because it reeks of ghosts, death, and everything evil.

Bikini Atoll, located in the Marshall Islands in the Pacific Ocean is regarded as a UNESCO World Heritage site. Between 1946 and 1958, twenty-three nuclear tests (likened to 7,000 times the force of the Hiroshima bomb!) were carried out on the island by the United States. This had major consequences on the environment of the island and on the health of the people who were exposed to the radiation, with people coming down with severe radiation illnesses. The greatest exposure comes from eating contaminated locally grown foods like coconut, papaya, limes, and breadfruit. Animals raised on the island such as pigs, chickens, and ducks also carry huge risks. It’s not just nuclear radiation that makes Bikini Atoll island dangerous, it is also known for being home to dangerous sharks. Think twice before you go diving into the lagoons of Bikini Atoll.

Saba – the smallest island of the Netherlands, is known as the “Unspoiled Queen” of the Caribbean. Visitors often explore its pristine beauty and rich ecosystem, as well as scuba diving and hiking. Despite this, the small island of Saba is considered dangerous because of multiple episodes of severe hurricanes. The Caribbean Hurricane Network reported that Saba Island had been hit by the heaviest hurricanes in the past 150 years (more than any other island on earth!)  If you ever want to visit Saba, only go during the winter. You don’t want to be caught on Saba Island in the high temperature of the hot springs.

Considered Great Britain’s wildest and least inhabited corner, Gruinard Island is located in Gruinard Bay about halfway between Gairloch and Ullapool. The small, oval-shaped island became dangerous after experiments with the anthrax bacterium were carried out on it by the British government. It was a site for biological warfare testing during World War II, which led to the deadly pollution of the island. Many sheep were infected with anthrax and later died, which demanded that the government quarantine the island. Even though Gruinard Island was decontaminated in the 1980s, it has still been uninhabited and anthrax spores are still present in the soil.

One of the Andaman Islands, the North Sentinel Island is located in the Bay of Bengal, India.

North Sentinel Island is home to the Sentinelese, a group of indigenous people unreceptive towards anyone from the outside world for the last 60,000 years. This island is so dangerous that even the government of India has made it illegal for its people to go within three miles of it. The Sentinelese aggressively attack visitors with deadly spears and arrows. In fact, two fishermen who wandered into the North Sentinel island were killed by archers in 2006. Why exactly the Sentinelese aggressively reject contact with visitors who attempt to set foot on the island remains confusing. But the fact remains: they want to be left alone.

Miyake-Jima is a volcanic island in the Philippine Sea, southeast of Tokyo, Japan. Its natural habitats are constantly under threat from volcanic emissions. The highest elevation on the island, Mount Oyama, is an active volcano that has erupted multiple times throughout history. The most recent volcanic eruptions lasted for four years, leading to a constant flow of toxic sulfur vapors on the island.

Alarms go off across the island whenever there’s a dangerous increase in the levels of poisonous sulfuric gas in the air. If you’re visiting this island, you will be required to carry a gas mask at all times. Because of the unpredictability of air quality becoming toxic, Miyake-Jima – ‘the gas mask island’ is a dangerous place to visit.

Farallon Islands are a group of islands off the coast of San Francisco, United States. The Farallon Islands are home to the largest seabird colony and a variety of other wildlife including seal species, whales, and dozens of great sharks. It has one of the greatest concentrations of great white sharks in the world, earning itself the name “Devil’s Teeth Islands”. But long ago, seabirds and sharks weren’t the only inhabitants – humans used to live on the Farallon Islands. According to U.S Geological Survey, about 48,000 drums of low-level radioactive waste were dumped in the sea around the islands between 1946 and 1970. The Farallon became completely off-limits to the public and only accessible to a few conservation scientists. The exact current location of the waste containers and the potential hazard to the environment remains unclear.

Located in the Indian Ocean east of Madagascar, the flora of Reunion has a great diversity of natural environments. This island is home to many bird species and rich marine biodiversity. However, the Island is dangerous for one reason: deadly sharks populate its shores. It is home to a variety of shark species such as whale sharks, blue sharks, bull sharks, tiger sharks, coral sharks, and many more. Shark attacks on Reunion Island have led to the killing of nine tourists between 2010 and 2017. For this reason, swimming and surfing are prohibited around the Island.

Ramree Island in Myanmar is home to the largest population of saltwater crocodiles, the largest reptiles in the world. The deadliest crocodile attack in recorded history happened on Ramree Island towards the end of World War II. Hundreds of Japanese soldiers who survived the battle met their doom when they chose to escape through the marshes that surrounded the island, where they were unfortunately killed in the crocodile-infested waters. According to the Guinness Book of Records, this was the Greatest Disaster Suffered by humans from animals. Ramree Islands is not the typical vacation spot you’re used to seeing…it is an absolute nightmare! 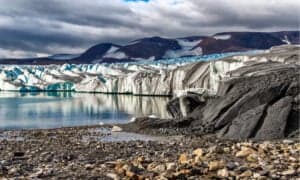 Discover the 15 Largest Uninhabited Islands in the World