Georgia is known for it’s many diverse ecosystems and beautiful scenery, and there is perhaps no area more stunning than North Georgia.  With vast mountainous regions and miles of rivers, North Georgia has different habitats home to thousands of wonderful animals.  Amongst these animals are snakes, and North Georgia has its fair share of the 46 species found in the entire state.  Of these, there is a vast range of sizes and colors, along with three of Georgia’s six venomous snakes.  So join us as we discover some of the snakes in North Georgia!

One of the most beautiful snakes in north Georgia is the eastern kingsnake.  Although dark brown, eastern kingsnakes have incredibly shiny scales with white crossband markings and a chain-like pattern down their bodies. Eastern kingsnakes are 36 to 48 inches long and live in a wide range of habitats.  However, they particularly prefer open grasslands and areas close to rivers and streams. Eastern kingsnakes are powerful constrictors and prey on rodents, lizards, birds, and frogs.  They also prey on many other snake species – including venomous ones.  This is because they are actually immune to the venom produced by rattlesnakes, cottonmouths, and copperheads.  This unique ability is also why they are named “king,” as they prey on so many other snake species.

The first venomous snake on the list is the timber rattlesnake which is 36 to 60 inches long. Timber rattlesnakes have thick, heavy bodies which are brown with black or brown crossband markings. Although they typically live in deciduous forests, the females tend to prefer open areas in the sun where the temperature is higher – such as rocky ledges. During the summer, they are nocturnal, while during the spring and fall, they are most active during the day. Timber rattlesnakes prey on birds, rodents, frogs, and other snakes. They are one of the most venomous snakes as they have incredibly long fangs and contain a high amount of venom. However, luckily they don’t have a particularly aggressive nature and typically flee when threatened. Even if they are cornered, they usually give plenty of warning rattles before striking.

One of the most common snakes in north Georgia is the eastern garter snake. Eastern garter snakes are 18 to 42 inches long and are easily spotted due to their distinguishable yellow stripe over a greenish-brown background. They live in many different habitats, although fields, abandoned farmland, and stone walls separating fields are particularly favored. They are also one of the most frequently seen snakes in gardens and city parks. Although eastern garter snakes eat anything they can catch, their diet typically consists of worms and amphibians. Due to their relatively small size, they have many predators – including hawks, raccoons, foxes, and larger snakes.

Another venomous pit viper is the pygmy rattlesnake which is relatively small at only 16 to 24 inches long. There are three subspecies of pygmy rattlesnakes, and they are typically gray or grayish-brown with darker spots and a red stripe down their bodies. Pygmy rattlesnakes usually live in forests and floodplains but are also common near lakes and marshlands. They often inhabit burrows made by rodents and gopher tortoises. Their rattle is small and can only be heard from a short distance away. Also, as they are so small, pygmy rattlesnakes don’t produce much venom, which means that bites are rarely fatal for healthy adults. Their diet usually consists of birds, lizards, and frogs.

One of the most brilliantly green snakes is the rough green snake. Rough green snakes are stunningly bright green on their dorsal side with cream or yellow bellies. As they often live in meadows, they have the perfect camouflage and can be incredibly difficult to spot amongst the grass. Rough green snakes are 14 to 32 inches long and have keeled scales. Keeled scales are not smooth but have a ridge down the center which gives a rough texture, and hence gives these snakes their name. Rough green snakes are highly accomplished swimmers and climbers and tend to sleep coiled around tree branches. They are completely harmless to humans and prey only on small animals such as spiders and insects.

Named for their speed, southern black racers are agile snakes which are highly active. They are one of the most common subspecies of eastern racer snakes and are typically black with a white chin. Their size varies greatly, between 24 and 60 inches long.  Southern black racers are found in a variety of habitats but tend to prefer grasslands.  They are non-venomous and prey on lizards, insects, birds, rodents, and frogs. 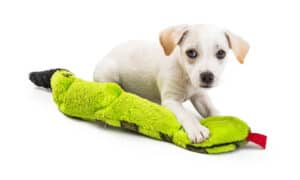