Lions, tigers, and jaguars are the best-known big cat breeds. However, most members of the Felid family are small wild cats that weigh under 50 pounds. Many types of wild cats prowl the forests, mountains, and jungles of the world. They vary in size, habitat, and fur type, but they share many traits. These wild felines are just as graceful and powerful as their larger cousins.

As of 2017, there are 41 recognized species of wild cats. Here are 10 of the world’s most unusual, stunning wild cats and some interesting facts about each.

The ocelot (Leopardus pardalis) is one of the most beautiful wild cats in the world. This medium-size cat can weigh up to 33 pounds and grows to about 3 ½ feet long. It has a stunning, thick coat with dark spots that make it look like a miniature leopard. The ocelot has an extensive range that extends from the southwestern part of North America into South and Central America. An excellent swimmer, climber, and runner, the ocelot is an almost perfect predator.

As a nocturnal animal, Ocelots tend to be shy and hides away during the day. Their excellent eyesight allows them to hunt and stalk prey in the dark, and they communicate with other ocelots through quiet meows. They mostly hunt small animals on the ground but have also been know to attack monkeys, turtles, anteaters, and even undersized deer.

This lovely cat (Felis nigripes) is the smallest wild cat in Africa and one of the smallest wild cats in the world. In size and shape, it looks strikingly like a domestic cat. The black-footed cat has adapted to its habitat with furry feet that protect it from the hot sand. This cat has a reputation for fierceness, and it is considered the most successful hunter of all cats. It is an excellent climber and can jump 5 feet into the air.

One of the smallest of all the big cat breeds, the sand cat (Felis margarita) looks like a cute, cuddly domestic cat, but it thrives in a harsh desert habitat. It has an average weight of 6 to 8 pounds. Like the fennec fox, the sand cat is a psammophile, which is an animal that thrives in the sand. It is native to the deserts, grasslands, and rocky valleys of the Middle East and North Africa. The temperatures where it lives are extreme. By day, they can reach 126 degrees Fahrenheit, but they drop to 23 degrees at night.

The snow leopard (Pantera uncia) is one of the most mysterious of the wild cats. These gorgeous cats are known for their snowy, spotted coats and bright blue eyes. Because they’re elusive cats who live high in remote mountains, we know less about these than we do other types of wild cats. The snow leopard lives in the mountains of Central Asia at altitudes of 11,000 to 22,000 feet. It also hunts in the forests and grasslands at lower elevations.

The fishing cat (Prionailurus viverrinus) is native to Southeast Asia. The fishing cat stands out among other types of wild cats because it is a strong, skilled swimmer. It reaches a length of 4 feet and a weight of 11 to 35 pounds. The fishing cat gets its name for its ability to swim. Identification of a fishing cat is easy because of its partially webbed feet and thick, waterproof undercoat. These adaptations allow the fishing cat to swim well, even underwater. Most of its diet is fish, and it also eats small rodents.

This fierce little feline (Prionailurus rubiginosus) is native to India, Sri Lanka, and Nepal. This nocturnal feline may be the smallest wild cat in the world. Measuring under 2 feet in length, it looks like a tiny leopard with its spots, long tail, and pointed ears. Identification of the rust-spotted cat, as its name implies, is from the rust-colored spots on its fur. With its enormous eyes and tiny size, it looks utterly adorable, but this cat is a skilled predator.

This unusual wild cat (Caracal caracal) is easy to identify because of its unusual ears with long, hairy tufts. This beautiful wild cat has a lean, elegant body and reddish golden fur. It may be the most beautiful of African big cat breeds. Caracals are native to North Africa and Egypt. There is evidence that the caracal was important culturally to the ancient Egyptians. The caracal stands about 1 ½ to 2 feet tall and weighs from 20 to 45 pounds. Its preferred habitat is dry scrubland and grassland, where it is a deadly predator.

The Pallas cat (Octolobus manual) is native to the mountains of Asia. Also known as the steppe cat or rock wild cat, it has been spotted in Iran, Pakistan, northern India, and China. Like the snow leopard, it has adapted to life at high altitudes and wintry weather. The Pallas cat, however, is much smaller than a leopard. It grows up to 2 feet long and weighs about 10 pounds. This gorgeous wild cat has a stocky build and thick, fluffy fur. For a cat of small size, it has a wide territory, where it hunts pikas and other small mammals.

The jaguarundi (Herpailurus yaguarondi) is slightly larger than a domestic cat. They are native to Mexico, Belize, and other countries in Central and South America. The jaguarundi is a superb jumper who can leap more than 6 feet in the air to catch its prey. It moves swiftly and low to the ground, which allows it to hunt rabbits and small rodents. A jaguarundi weighs 8 to 16 pounds and has a solid brown or gray coat.

This beautiful wild cat (Lynx pardinus) has long, tufted ears and fluffy paws. It is native to the mountains of Spain, where it preys on rabbits, rodents, and other small mammals. The Iberian lynx almost became extinct, but a concerted conservation effort reintroduced lynxes that were bred in captivity. It has a fawn-colored coat with dark spots and long legs. An Iberian lynx weighs up to 35 pounds.

How many different types of wild cats are there?

There are 40 species of wild cats, and most of them are small wild cats that weigh less than 50 pounds. These facts about wild cats may be surprising, but these little cats are just as graceful and powerful as their larger cousins.

The tiger is the largest of the world’s big cats. The smallest is the black-footed cat, the sand cat, and the rusty-spotted cat.

How can a little wild cat be called a big cat?

There’s no exact identification of what a big cat is. Some people believe only cats that roar can be big cats. Those cats are the tiger, lion, jaguar, and leopard. Others say that all wild, undomesticated cats are big cat breeds. That classification would include all the wild cats on this list, even the tiny sand cat. As the facts about wild cats show, they all share similar traits. They are carnivores and excellent predators who dominate their environment. 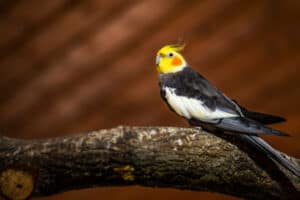