Chris Desborough/Shutterstock.com
Share this post on:
More Great Content:
Mountain lions in Virginia
Mountain Lion (Cougar) Population by State
Do Mountain Lions Attack Humans? Here's What…
Mountain Lion Size Comparison: How Do They…
Puma vs Mountain Lion: Is There a…
Mountain Lion Poop: Everything You've Ever Wanted…

Found almost everywhere in North and South America, mountain lions are one of the most incredible predators you’ll find in the western hemisphere. Not actually big cats, these American lions are known for their uniqueness: from their world records to their house-cat-like qualities. Don’t believe us? Here are 11 mountain lion facts that will show you we aren’t “lion” about how incredible these cats are!

1.Mountain lions have more names than any other animal in the world

Did you know that mountain lions, pumas, and cougars are all the same animal? As of now, mountain lions hold the record for having the most names with 40 different nicknames. Some of the most common mountain lion alternative names are

While you may see it known mostly as a mountain lion in day-to-day life, often, scientists prefer to call these stealthy predators “pumas”. This is because of their scientific name, which is Puma concolor.

Mountain lions have lots of names, but it’s important not to get them confused with other American cats, such as bobcats or lynxes. While still cool cats, these are different animals than the mountain lion.

…but that doesn’t mean they don’t communicate in plenty of other ways! Mountain lions’ have a different larynx than most of the big cats you may be used to, such as tigers and lions. As a result, they communicate in different ways, such as chirping, growling, shrieking, and even purring.

3. Mountain lions live in nearly every ecosystem in America

With a diverse diet and the ability to live in everywhere from rain forests to deserts to snowy mountains, you’ll be able to find mountain lions in almost every ecosystem in North and South America.

While mountain lions rarely weigh over 200 pounds, one record-holding ghost cat weighed in at 276. pounds! For comparison, that’s more than a giant panda, which averages at about 245 pounds. It’s also about the average size of a female lion, which weighs about 280 pounds.

If you ever found a mountain lion cub out in the wild, you probably wouldn’t recognize it!

When mountain lions are first born, and even while they’re growing up, they look vastly different than their adult counterparts. The most noticeable differences? Their blue eyes and dark spots on their fur. As they mature, their eyes will shift to yellow and their spots will fade into their iconic tawny coat, becoming almost unrecognizable over the course of just a few weeks. If you enjoyed this fun fact, baby lions exhibit the exact same traits!

6. One subspecies of the mountain lion is highly endangered

While mountain lions are known for their ability to live in almost every ecosystem found in North and South America, there is one subspecies that has been endangered for several decades.

The Florida panther, one subspecies of the mountain lion, has been listed as endangered since 1967. One of the main causes identified has been human development, which is destroying the mountain lion’s habitat and making it more difficult for them to access food. Roads also pose a large threat to mountain lions, especially since they tend to roam at night where they may not be seen by drivers until it’s too late.

However, decades of conservation efforts have helped the population increase from a few dozen to the 120-230 adult mountain lions currently alive as estimated by Florida Wildlife Control in 2021.

One of the coolest facts about mountain lions? Proportionally, they have the largest legs out of all of the members of the feline family. This helps mountain lions adapt to a variety of situations and terrains – but most importantly, it helps them reach impressive speeds of up to 50 miles per hour!

Even though they can only maintain this top speed for a short period of time, they are able to maintain speed up to 10 mph for long-distance sprints.

This is one reason why if you ever encounter a mountain lion, you should never run away – after all, at 50mph, they won’t let you get too far. Instead, stay calm, stay upright, and back away slowly. Making yourself as large and loud as possible can also help, since mountain lions are opportunistic hunters and most likely won’t want to put up a fight.

They’re so rare, in fact, that many statistic experts say that you’re more likely to be struck by lightning than suffer a mountain lion attack. This is mainly due to the fact that human and mountain lion encounters are so rare, and when they do occur, mountain lions are easily startled off.

9. Mountain lions are great at jumping

Mountain lions’ large legs allow them to do more than just run fast – they can also jump up to 18 feet off the ground! This is important for hunting, especially since mountain lions rely on ambushing their prey for success.

Lucky scientists got to glimpse a puma make a 10 foot leap into a tree. But what was truly impressive was the fact that the feline actually had a deer in its jaws at the time.

Their athletic skills don’t stop there either. Mountain lions are capable of leaping 45 feet horizontally.

Their forelegs which are connected to their shoulder blades making it supremely easy for them to swerve, play a role in their impressive athleticism. So do their vertebrae which rely on muscles rather than ligaments.

One of the easiest ways to identify a mountain lion track compared to other animals? Look for claws – or rather, the lack thereof.

Like most other species in the cat family, mountain lions have the neat ability to retract their claws. This means that, unless you’re looking on particularly rough terrain, you won’t usually see the sign of claws in their tracks.

Another way to tell if the tracks you’re dealing with are a mountain lion or not is to look for the notable “M” shape of their main paw pad. Remember: “M” is for mountain lion!

11. Mountain lions are an important part of indigenous culture

Known for their power and grace, mountain lions are common symbols in indigenous American culture, from mythology to art. While some indigenous peoples view mountain lions as symbols of bad omens, many see these apex predators as sacred and revered animals, such as the Inca people and the Cherokee people. 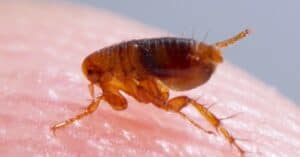 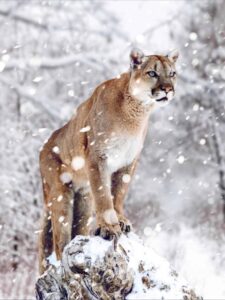