Written by Taiwo Victor
Published: August 31, 2022
© marina_eno1/Shutterstock.com
Share this post on:
More Great Content:
Is Hibiscus a Perennial or Annual?
Rose Of Sharon vs. Hardy Hibiscus
7 Extinct Trees
Are Mushrooms & Other Fungus Plants?
The 5 Best Annual Flowers For Zone…
Are There Any Plants That REALLY Keep…

Have you seen any blue flowers in Texas? If you live in the Lone Star State or are merely visiting, we’re certain that you have come across some blue wildflowers. After all, the state’s official state flower is blue, so it isn’t hard to spot one. Bluebonnets are incredibly gorgeous, and they are arguably Texas’ most popular flower. Blue blossom fields appear along roads and fields every spring, creating an amazing picture.

There is no doubt that blue-hued flowers give a soothing, calming, and relaxing feeling to anyone who sees them, and Texas has surprisingly plenty of them. When you think of the state, it may conjure images of dry land, arid plains, rodeos, and cacti-filled roadsides. However, Texas is blessed with varied topography, making way for beautiful flowers to come out in the spring and summer. Below, we’ve curated a list of Texas’s most stunning blue flowers.

The bluebonnet is Texas’ most popular flower– for good reasons. Any of the numerous purple-flowered species of the Lupinus, primarily found in the southwestern United States and collectively serve as the state flower of Texas, are referred to as bluebonnets. In 1901, Texas declared the bluebonnet its official state flower. Due to their blue hue and sunbonnet-shaped petals, bluebonnet flowers earned their common name.

Texas bluebonnets are annual plants, which means they complete their life cycle from seed to flower in a year. With a little perseverance, you can grow a bluebonnet patch in your yard, ranch, or side of the road.

The Scorpion Weed is another name for the Forget-me-not due to the flower stalk’s coiling, which resembles a scorpion’s tail. The forget-me-not plant’s seeds proliferate quickly, so they can start growing in unexpected places. North Texas is home to two forget-me-not species: the Spring Forget-me-not and the Large-Seed Forget-me-not, which both blossom from March to May.

Some claim that the plant’s terrible flavor or odor, which is difficult to forget, is the source of the common name “forget-me-not.”

This blue wildflower is common and can be found all around Texas. Due to its tall, thick leaves and tiny blue blossoms, it is also known as Bermuda blue-eyed grass. However, it is not a true grass, despite the name. It blooms from March to May and, on sunny spring days, covers the fields next to the road with blue to purple blossoms and grass-like leaves.

An excellent nectar and pollen provider, this plant effectively lures bees, butterflies, and other insects. Because numerous birds consume these perennial seeds, it might also draw songbirds.

The Asiatic Dayflower is an annual weed that, although not grass, resembles grass when it is mowed. It can be distinguished from Spreading Dayflower, which has 3 blue petals, by its two blue and one white petal. Texas’ major cities are typically the only places to find this blue wildflower. However, it frequently makes its way into gardens via bags of soil bought. The Asiatic Dayflower serves as a host plant for the caterpillars of the Pearl Crescent butterfly.

Hawaiian Blue Eyes is another frequent name for Blue Daze, which also goes by the common name shaggy dwarf morning-glory. Blue Daze blooms best in full light and produces fewer flowers in overly shaded regions. The list of Texas Superstar plants for 2020 includes this tried-and-true Lone Star favorite. For a plant to be named a Texas Superstar, it must be attractive and productive for growers throughout the state. A summer annual, Blue Daze is a tropical plant that enjoys heat and sunlight. Blue Daze is a fantastic choice for coastal gardens since it can withstand saline conditions.

The False Dayflower has lovely green leaves speckled with purple and lavender blossoms and is native to Northeast Mexico and Texas. This wildflower, sometimes known as widow’s tears, is unique to Texas. It prefers the margins of wooded areas, ravines, and rocky slopes. Despite being in a different genus, it is frequently referred to as a Tradescantia and was previously known by the name Tradescantia anomala. Although it has spread to other regions of Texas, the Edwards Plateau is where it is most prevalent. Each bloom has two tiny, rounded petals with an intense blue hue that almost seems indigo.

One of Texas’s more well-known spring flowers, Cape plumbago, blooms profusely from May until the first frost. Cape plumbago originates from a warm, temperate, tropical region in South Africa. This flower is a delicate perennial, yet it is tough enough to endure Texas’ summer heat and humidity. It thrives in environments with regular grass mowing, sandy, light soil with adequate drainage, and plenty of organic materials.

This wildflower grows in the woodlands of Oklahoma, Arkansas, Louisiana, and Texas. It is an annual plant that produces big, spectacular flowers with a white center and a blue or purple outer edge. Common names for the flower include flannel breeches, Texas baby blue eyes, and largeflower baby blue eyes. They can cover the ground when they find a site they like, but they favor shadier areas with sandy, silty soil.

The Virginia dayflower is a perennial herbaceous monocot (one seed-leaf) that prefers moist soils and shaded areas. The clusters of flowers on each stem end of this three-petaled wildflower open in the morning and close at noon, lasting only one day. It occurs from Texas through Nebraska to New York and south to the borders. Furthermore, the Virginia dayflower is characterized by three vivid blue petals.

Salvia farinacea, often known as Blue Mealy Cup Sage, is a native of Texas. It can grow to 2 to 3 feet and bears blue or purplish-blue blooming spires. It originates from Texas and Mexico and resembles the well-known Texas bluebonnets morphologically. This plant is very well-liked in the Dallas-Fort Worth area. It’s a Texas Superstar known for its low maintenance requirements and ability to endure heat, drought, and humidity. Salvia farinacea can bloom continuously for up to five years with proper care.

Eastern US is the natural home of the Northern blue flag iris. It frequently spreads from Virginia to Florida in the south and eastern Texas in the west. The plant’s blossoms range from pale blue to deep violet and rarely white. This herbaceous perennial does best near the edges of ponds and marshes because it enjoys having damp feet. It is a clump-forming wildflower with two-foot stalks and spectacular flowers at the top. This plant is dangerous, so make sure to wear gloves when handling the rhizomes to prevent skin irritation.

Butterflies flock to this common shrub, which is also fantastic for drying and cutting. From the tropics of the Old World, Bachelor’s Button arrived in Texas. They are said to have been a feature of the earliest American gardens. The daisy-like blossoms of the Bachelor’s Button are almost entirely free of pests and diseases. In most of Texas, June and July are ideal for seed planting. Many gardeners like to scatter the seeds of Bachelor’s Button around a limited area since they are so simple to cultivate and transplant.

Chicory is a cool-weather plant in Texas, but it grows during most of the summer in the rest of North America. Texas is home to this non-native blue wildflower. Look for it along roads, and open fields as this plant typically grow in bright, dry areas. Chicory is intriguing because it can be eaten. Although it has a strong, somewhat bitter taste, the young leaves can be used uncooked in salads.

This fragrant blue wildflower produces beautiful, deep white or blue flowers, and its stems are frequently hairy and sticky to the touch. Wild Blue Phlox blooms for over a month in late spring and early summer, making it the ideal phlox for shady locations. The fragrant flowers infrequently appear in pastel pink or white and range in color from mild lavender to blue. Wild Blue Phlox has a decumbent stem that roots at the nodes and sends up 8 to 18-inch erect branches. The Wild Blue Phlox, also known as Blue Moon, would make a lovely addition to your flowerbeds and border plantings.

From late spring to mid-summer, the Lewis Flax blooms for weeks, but you’ll see the flowers open in the morning and disappear in the late afternoon. This is due to the blooms’ short lifespan of just one day. It reaches a height of 18 to 20 inches and rarely stands upright; instead, it leans. Lewis Flax blooms have five pale blue petals that measure approximately one to one and a half inches in diameter and are veined with darker blue. The American Indians used this blue perennial’s long, durable stem fibers to make fishing lines, ropes, cords, and nets.

What Flowers Do Deer Not Eat?

Discover the ‘Alien Invader’ Bug That Can Ruin Your Christmas Tree 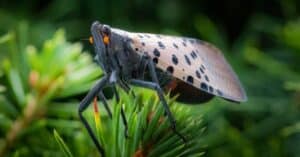