Whale sharks may be the most interesting fish on the planet, not to mention the largest. These spotted giants can be found in tropical and temperate oceans all over the world, although they are considered to be endangered. While it’s somewhat tough to see a whale shark in its natural habitat, they can be seen in a few aquariums around the world.

For many, aquariums are the best (and only) plausible place to glimpse the world’s largest fish species. Seeing these giants in the wild is possible, but it’s difficult due to their limited population and avoidance of shallow water. Ecotourism has gained popularity in places like Mexico recently (tourists can pay to swim with whale sharks in the wild), it’s only possible because of its proximity to natural feeding grounds.

Since whale sharks are so large, only a few aquariums in the world can properly house them. Let’s take a look at five aquariums with whale sharks and learn a little bit about the fish (and the aquarium) as we go. If you happen to find yourself near one of these aquariums, you’ll now know you can stop by and see these truly majestic animals. Let’s start.

The Georgia Aquarium is a scientific institution that allows public viewing of many of its animals. Located in Atlanta, Georgia, they maintain 11 million gallons of water and have exhibits and programs that guests can view up close. The Georgia Aquarium is a leader in the research space and animal care. The aquarium’s main focus is to combine field research with site-controlled research to allow for in-depth understanding and care of the world’s sea creatures. Additionally, the Georgia Aquarium is the only Western aquarium to house whale sharks.

One of the best features of the Georgia Aquarium is the Ocean Voyager tank. This tank is the largest in the world and holds 6.3 million gallons of seawater. With a space so large, it’s no wonder they can keep the world’s largest fish. Inside the tank are fish, sharks, and of course, whale sharks. Housed within is not just a single whale shark, but four. As you sit staring at the massive glass viewing area, you can see four separate whale sharks in a single tank. Additionally, you don’t have to visit the aquarium to see them either. They also offer a free live stream on their website. Anyone wanting to spot one from home, can!

The Churaumi Aquarium is located in Okinawa, Japan, and is designed to display the incredible creatures near Okinawa. Aside from just fish, the aquarium displays the history and cultural importance of various ocean life. The tanks open for display at the Churaumi Aquarium are the Coral Sea Tank, the Kuroshio Sea Tank, and the Deep Sea Tank.

If you are in Okinawa and want to see whale sharks, the best place to look is going to be the Kuroshio Sea Tank. The program houses a few captive-bred whale sharks that are displayed through the thick acrylic. Additionally, Churaumi Aquarium is at the forefront of whale shark breeding efforts, and its program is focused on that goal. Since the program’s inception, they have raised multiple whale sharks to maturity and use their specimens to learn more about the mysterious fish.

The Kaiyukan Aquarium is a beautifully designed aquarium located near Osaka Bay, Japan. The Japanese aquarium is designed around the Ring of Fire, a volcanically active region across the Pacific tectonic plate. The aquarium has 15 tanks designed after various regions found within the Pacific rim. The aquarium’s “centerpiece” is their largest tank, the Pacific Ocean. The exhibit is 9 meters deep and holds 5,400 tons of water, making it the only home for a whale shark in the aquarium.

The Kaiyukan Aquarium pioneers whale shark research. Their Pacific Ocean tank holds whale sharks that can be viewed by anyone nearby. As their largest tank, the Pacific Ocean is 9 meters by 34 meters, allowing the sharks to swim around with relative ease. Aside from their research within the aquarium, the research team also tags and studies wild specimens. In fact, they were the ones to discover that whale sharks can dive to depths of 1,300 meters.

Ioworld Kagoshima Aquarium is located in Kagoshima City, Kagoshima Prefecture, Japan. The “io” in “ioworld” is actually a local dialect that means “fish.” The aquarium is known for its whale sharks and dolphin shows, with their dolphins living in the nearby Kinko Bay. The aquarium is a bit smaller than the others on the list, and their shows are totally in Japanese, making for more manageable crowds.

One of the most interesting practices that Ioworld utilizes is their capture and release with their whale sharks. Whale sharks are notorious for dying in captivity. To work around this, Ioworld has a special practice in place. They capture small (young) whale sharks in their nearby ocean and use them in their tanks. When they reach a length of 5.5 meters, they are then released back into the ocean where they came from.

The Kenting National Museum of Biology and Aquarium is located in Taiwan. The largest aquarium in the nation, the researchers and staff are dedicated to marine education and research. They opened in 2000 and are known as one of the most beautiful aquariums worldwide.

Within the museum is the Open Ocean Aquarium, a tank designed to display wonderful sea creatures from the open ocean. Although they don’t list the size of the display, it’s late enough to house a whale shark. At the time of this writing, they held a 16-meter (52 feet) long whale shark, as well as 13 dolphins. Large whale sharks don’t often make it long in captivity. Evolved for the open ocean, tank run-ins and other pressure often result in unfortunate fatalities. 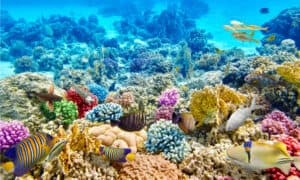 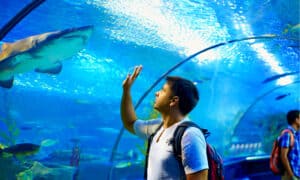