Written by Heather Hall
Updated: September 13, 2022
© D. Kucharski K. Kucharska/Shutterstock.com
Share this post on:
More Great Content:
What Kills Bed Bugs Instantly?
How To Get Rid of Roaches Overnight
Carpenter Ants vs Black Ants: What’s the…
Where Do Bees Go In The Winter?
The 10 Largest Grasshoppers In The World
Types of Beetles: The Complete List
↓ Continue Reading To See This Amazing Video

Bed bugs aren’t known to directly spread disease, but that doesn’t mean that they aren’t a public risk. These tiny bugs can reproduce quickly, and they’re notoriously difficult to eliminate entirely once they’ve begun their reproduction cycles within a new house. If you’re trying to get rid of bed bugs there many steps involved. And since they resemble so many other types of pests, it can be difficult to identify that you have bed bugs in your home even if you’re waking up with red bumps every morning. Being able to recognize the facts and early signs of an infestation can help prevent an infestation from growing out of control. Identification can take a number of different forms, and you should recognize all of them so that you can don’t mistake a bed bug infestation for an outbreak of lice, mites, or even cockroaches. Here are the five early signs of a bed bug infestation you should keep an eye out for.

If you’re waking up with pink marks all over your body, that’s clearly a sign of something wrong. But it isn’t necessarily a sign of bed bugs in your home. These bugs venture out from their homes to seek out the blood at night, but it can be difficult to distinguish a bed bug bite from the bites of chiggers, mosquitos, or other insects. The strongest indication that you’re dealing with a bed bug infestation — rather than an outbreak of another type of insect or an allergic reaction — is if the bites you’re suffering from appear in a pattern. Bed bug bite patterns most commonly appear in a straight line of a zig-zag, but they can also appear together in a cluster. Bites from mosquitos and other bugs typically have no such sense of reason.

But just because you aren’t experiencing bug bites doesn’t mean that you don’t have bed bugs. Some people — as many as 30% of the total population — don’t respond to the bites of the bed bug at all, and other people might exhibit swelling but not even notice it because they don’t experience pain from the bite. In many cases, the appearance of welts doesn’t happen until well after the bite was inflicted. And since most bed bugs won’t eat every day, bites don’t even exhibit a noticeable pattern until the infestation is already rather large. Knowing the facts about what separates a bed bug bite from another source of irritation can assist with identification, but you should also treat it as a reason to identify the problem and a solution as quickly as possible.

If you’ve begun to experience itching after bringing used furniture into your home — and especially if you experience that itching after napping on that furniture — it could be a sign that bed bugs stowed away on the trip. Practically any wood or upholstered piece of furniture can be a reasonable hiding spot for bed bugs, and they’re small enough that they can exist in practically any crack or crevice that can fit the edge of a credit card. Calculate in the facts that they’re willing to travel up to 50 feet to travel and can breed prodigiously, and an isolated infestation can quickly spread through an entire house. But the sooner you can identify the furniture that brought the infestation, the more effectively you can isolate and treat it. Start your inspection on the new furniture and work outward in search of signs of bed bugs.

Bug infestations are often associated with filth, but bed bugs subsist solely on blood for their survival and can manage to thrive in houses no matter how clean they otherwise are. The mobile nature of bed bugs allows them to spread between apartments in a complex, rooms in a hotel, and even houses in a neighborhood. They can also hitch a ride on clothing or purses to find their way into your home. If you’ve heard about neighbors dealing with a bed bug infestation, you may want to exercise some extra diligence in caution just in case you find yourself dealing with some stowaways.

Mattresses are often the hardest hit point of a bed bud infestation. It is usually the safest and fastest solution to simply replace the mattress entirely. While traditional coil spring mattresses make it easy for bed bugs to hide, an all foam mattress with a gel topper and encasement sheet is a good alternative and can prevent future infestations. Our recommendations are below. 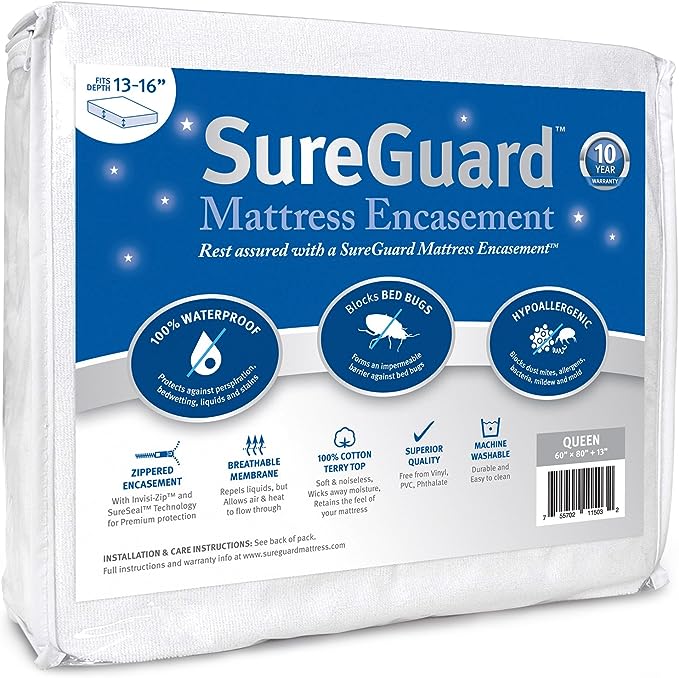 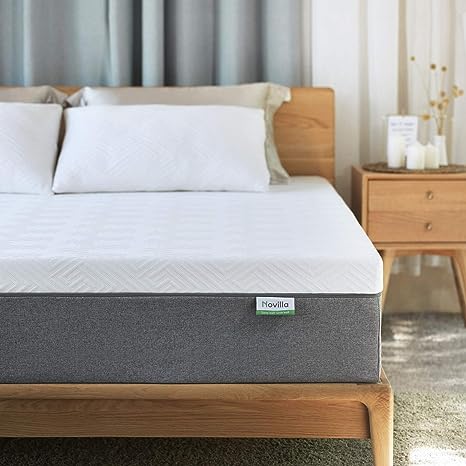 Your sense of smell can also help recognize some of the early signs of bed bugs. Like most other insects, bed bugs instinctively give off something called an alarm pheromone when they’re startled. That pheromone gives off a distinct odor in instances where a bed bug is exposed to light or otherwise finds its normal habitat disturbed. This smell has been described in a number of different ways, and it’s often considered to be generally pleasant at low concentrations. These alarm pheromones are frequently compared to either coriander or berries.

This smell might be apparent when you accidentally crush or disturb a bug, but they also use these pheromones to communicate with one another. If the smell becomes musty, unpleasant, or overpowering, it’s a sign that the population of bed bugs in your home may be starting to get out of control. Sometimes compared to rotting wood or mildew, it’s the result of multiple bugs using their pheromones to communicate with one another. The unpleasant odor of this smell can be further exacerbated by the presence of fecal matter from bed bugs.

Waking up with blood on the mattress is alarming no matter what the cause, but it could give the facts you need to diagnose a bed bug infestation before it becomes too serious. Since they survive by gorging themselves on the blood of sleeping humans, they’re prone to bursting in a splash of blood when they’re crushed. And while they minimize feeding duration to roughly five to ten seconds at a time, crushing is a serious risk. A small bloom of red or pink dots on your sheets is a likely sign that bed bugs are living on your mattress. You should check your pillowcases and pajamas for blood spots as well.

Even if you aren’t rolling over bed bugs in your sleep, there may still be stains on your mattress from the presence of these pests. Rusty or dark-colored stains are common on mattresses and other pieces of furniture where bed bugs tend to congregate. These are the result of fecal matter, as these bugs commonly void themselves while they’re gorging on human blood. If you can’t find any of these stains on your clothes, sheets, or mattress, you may want to turn your eyes to the walls. They can appear in large numbers either on the paint of your wall or even underneath the wallpaper.

The nymphs are only about the size of the head of a pin when they’re firstborn, but they definitely leave traces of their presence behind. The bed bug will grow five times over the course of its life — and each begins with them gorging on a heavy meal of human blood and ends with them leaving behind its current exoskeleton in exchange for a larger one. When you consider that a nymph can reach maturity in seven months and that a mother bed bug can lay up to 250 eggs in a lifetime, that’s a lot of skeletons floating around in an infested home. Fortunately, identification is easy for these shells. These white or yellowed husks can be found where bed bugs tend to live — primarily on wood or fabric surfaces like furniture.

The cracks and crevices where bed bugs hide are also the best place to go looking for bed bug eggs. Though they’ll appear from a distance to simply look like tiny white dots, a closer inspection will reveal them to be insect eggs. By thoroughly combing through dimples and creases in the nearby furniture, you can often get a better sense of an infestation’s scale. Look beneath cushions and in as many cracks and niches as possible. Bed bugs can squeeze between spaces as narrow as a credit card, so a change of perspective is important when hunting for eggs.

How long does it take to realize you have bed bugs?

Bed bugs can go long periods of time without feeding, and many people never actually exhibit symptoms from bed bug bites. For that reason, many people don’t discover bed bugs until months after they’re introduced into a household and have had a chance to reproduce out of control.

Can you have bed bugs and not see them?

It’s easy to have bed bugs in your home without ever seeing them. Since they’re primarily nocturnal and hide in the nooks and crannies in and around furniture, the best way to identify them is often to actively look for them.

What evidence do bed bugs leave behind?

Bed bugs often leave fecal or bloodstains on furniture, mattresses, and walls. They also give off a sweet and musty smell when they die or feel threatened. The evidence of reproduction can also be found in the form of shell husks and eggs left behind.

How long before I know if I brought bed bugs home?

If you’ve brought adult bed bugs into your home, the signs could begin to appear almost immediately, but it might be some time before bed bugs appear in large enough numbers to be noticeable. Eggs can hatch in as little as three weeks.

How do you check a mattress for bed bugs?

Take off all of your sheets and be sure to check in all the corners of the mattress for signs of bugs, shell husks, eggs, and blood and fecal stains. Bed bugs particularly like to hide in small spaces, so check where the upholstery and wood meet as well as in any cracks that might appear on the surface of your furniture.