7 Animals That Eat Their Young

Cannibalism is regarded as taboo throughout the world, and the act only becomes more horrific when you add babies to the equation. This is why it might be surprising to realize how many animals eat young members of their species.

These cases of offspring cannibalism can be found in mammals, birds, and spiders — and scientists have long puzzled over why and how this would have developed as a survival mechanism. In fact, up to one in three mammal species are known to commit infanticide.

The truth is that the circumstances that lead to these behaviors can be varied and are often uniquely influenced by environmental conditions.

Here are 7 examples of animals that eat their young offspring along with the context we have for why this cannibalism developed.

Much has been written about how climate change is destroying arctic environments and driving polar bears and other species to increasingly desperate acts of survival, but photographers from National Geographic were still shocked when they captured footage of an adult polar bear killing and devouring a younger bear.

And while it’s believed that this behavior isn’t only being caused by climate change, there are fears that it’s becoming more common as a result of dramatically shrinking environments for these giant beasts.

These animals are more likely to eat their young in the spring and summer, as the seal populations — and ice floes on which to hunt for them — begin to become less accessible.

Cannibalism usually takes the form of larger and more aggressive male bears targeting smaller females and vulnerable cubs. That’s not always the case, as a mother polar bear in the Nuremberg Zoo ate her starving cubs after an attempt by zookeepers to minimize human contact with them in their formative years.

Competition among siblings is common in the animal kingdom, but few animals start as early or as viciously as the Sand Tiger Shark. That’s because the mothers eat their young while they’re still in utero. Or more accurately, the fetuses of potential offspring vie for survival.

Females of the species will typically get pregnant by a number of different males at a time, and they carry many eggs but only have two uteri. That creates a situation where multiple offspring will devour one another until they’re reduced to only two.

This seems to serve a couple of purposes in the evolution of the species. The casual mating habits mean that grown males aren’t competing as fiercely for breeding rights, but the process of cannibalism within the mother’s body ensures a smaller gene pool that prioritizes the strongest.

The nutrients gained through the process also ensures that the sand tiger sharks that are born are stronger and more capable.

Chickens aren’t recognized as the smartest birds on the planet, so it’s only natural that their acts of infanticide and cannibalism are not always intentional.

In many cases, eggs from domesticated chickens simply break due to a coop being overcrowding, and then a chicken accidentally eats it not realizing what it is. Unfortunately, this can lead to the chicken developing a taste for eggs and even sharing that with others.

But for the most part, these animals eat their young when they’re suffering from a calcium deficiency. Ironically, a lack of calcium also leads to more fragile eggshells, compounding the issue in a way that can be frustrating to chicken farmers.

In fact, many make use of decoys that will change the habits of the chicken. Many chickens can’t tell the difference between an egg and a golf ball, and they’ll be dissuaded from continuing to munch on their own eggs once they’ve seen how hard it is.

Others make use of specially crafted dummy eggs to dissuade their fowl.

Not all prairie dogs kill their young, but it’s been observed with some frequency in three different species: Gunnison’s, Utah, and black-tailed. But the issue is most prolific in black-tailed prairie dog communities, where up to a third of offspring can fall victim to infanticide.

Normally it’s not the mother, father, or even a competing male that kills the young. Instead, female family members of the mother will kill and eat her litter when she leaves for an extended bout of foraging.

There are a number of reasons for the commonality of this brutal behavior. The first is that it leaves more resources for the litter of the prairie dog that committed the crime, but it also means that the grieving mother will have more time to help out raising the extended family once the short grieving process is over.

It’s also hypothesized that prairie dog mothers may act in this way preemptively, as a way to prevent a sibling from doing the same to their own litter.

Despite the propensity for infanticide, prairie dogs are fascinating and highly endangered creatures who are critical to the ecosystems they occupy.

While male lions maintain harems of females that they breed with, these big cats are renowned for being good mothers and fathers — and female lions are often even willing to nurse the cubs of other females in the pride. Unfortunately, infanticide is not uncommon thanks to the scarcity of available breeding partners.

Fathers evict their cubs from the pack at a certain age so they don’t become competition, and these roving young lions will often seek out an established pride to claim as their own. In many instances, lions who take a new pride will kill the cubs both to remove competition and bring the females back into heat.

Unfortunately, there are also instances where a mother will kill and devour a cub after the rest of the litter has died. Rather than having to dedicate an extended period raising a single cub, it makes sense from an evolutionary standpoint to simply start over with a new litter.

Infanticide by conquering males is far more common, and it’s theorized that as many as a quarter of all cubs are killed in this way.

Chimps are some of the smartest animals on the planet — and one of the species most closely related to humans — but they also have a propensity for eating their young. This behavior is most prevalent and dramatic during conflicts between chimpanzee groups.

Driven to compete violently for control of food, they’ll kill the young of opposing tribes, share the meat, and then retreat into the trees to eat it.

But males have also been seen simply stealing newly born infants from the arms of their mothers and killing and devouring them, and scientists believe that it’s so they can increase the number of breeding opportunities.

Females have also been seen killing infants unrelated to them, but this is even rarer still. Cannibalism isn’t a common occurrence in the animal kingdom, but it does help explain why female chimps tend to retreat into hiding when giving birth.

It’s believed that infanticide not related to territorial disputes is an effort by males to improve their breeding opportunities rather than an excuse to eliminate future competition.

Male primates primarily eat their own for a couple of different reasons. Males may kill and eat an infant of another female, usually in their own social group. However, if a chimp kills an adult from another group they will not eat the body.

The fish known as the blenny is refreshing in that it shares parenting responsibilities between the male and the female. Mothers will lay a large number of eggs at a time and leave their male partner to protect them alone until they hatch — but when the number of eggs isn’t large enough, the male blenny will sometimes get bored, causing this animal to eat their young.

Researchers once believed that this was a simple issue of nutritional value — but it’s not understood that these blennies are exercising a biological imperative to breed as effectively as possible.

That’s because the androgen levels of a blenny fish are directly tied to whether or not it’s in the presence of eggs it’s fertilized.

The fish is incapable of adjusting its androgen levels as long as the eggs are in proximity — and so it will hastily devour eggs or try to push them over the edge of the nest to get them out of its presence and breed with a new female as soon as possible.

This typically happens in instances where the number of eggs is particularly low — typically less than a thousand. In most instances, male blennies will have found a new partner to breed with the next day.

Here is a list of animals that eat their young:

6 Adorable Puppies In San Francisco To Adopt for Christmas 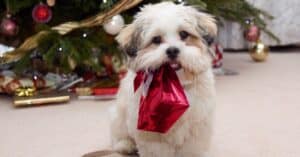