7 Snakes Near Dallas in North Texas

If you live in near Dallas, Texas, or plan to visit the area anytime soon, you may be wondering: are there snakes near Dallas? For this North Texas city, the answer is a resounding yes. Like most parts of the United States, Dallas has its fair share of scaly, legless reptiles. You might seen have snakes near Dallas anywhere from the great outdoors, to rivers and lakes, or even in your own backyard. With many snakes in so many places, it’s important to understand which are harmless, and which should be avoided.

Here, we’ll learn about the snakes native to North Texas, particularly the Dallas area. We’ll start by going over the various times of day, and year, that you’re most likely to encounter snakes. Then, we’ll take a look at the three most common non-venomous snakes near Dallas. After that, we’ll go over the four types of venomous snakes found in the Dallas area.

When do Snakes Come out in Dallas?

Snakes near Dallas are most active during the spring, summer, and early fall months. During the cold winter season, most go into a state of brumation. Brumation is the cold-blooded equivalent of hibernation, in which the snake’s metabolism slows, and they become stuporous and slow.

Snakes near Dallas are most active in the daytime when temperatures reach about 65 degrees. They come out to warm their bodies, and to hunt. As the summer turns hot, they become more crepuscular (active at dawn and dusk), and even nocturnal, to avoid the intense heat. So, if you’re watching out for snakes, keep the temperature and time of year in mind.

There are over 30 species of snakes near Dallas. Out of those, only a few are venomous. The most common snakes you might see in the area, by far, are Texas rat snakes, western ribbon snakes, and Texas brown snakes. If you see a snake in the water, chances are very good that it’s either a diamondback water snake or a blotched water snake, both of which are non-venomous.

Let’s take a closer look at the three most common non-venomous snakes near Dallas.

The most common snake near Dallas is the Texas rat snake. This snake is tan with olive green or brown blotches. It can reach lengths of over five feet long, and prey primarily on rodents. Unfortunately, despite their non-aggressive nature, they’re often killed by fearful humans who mistake them for venomous snakes. In fact, Texas rat snakes are essential for rodent control, and can be found anywhere there is a large rodent population.

Western ribbon snakes are small, slender snakes native to North Texas. They grow to a maximum length of around four feet, and eat mostly earthworms. They’re easy to recognize by the black and yellow stripes that run from head to tail. These snakes are easy going, and very unlikely to bite humans.

Texas brown snakes in Dallas live anywhere they can find insects, particularly earthworms, to eat. They grow to a maximum length of four feet, though most top out around 2.5 feet. They have light brown bodies with regular dark brown markings and a dark brown head. Like the western ribbon snake, they’re very gentle, and pose no threat to humans.

Dallas, and the surrounding area, is home to at least 30 species of snake. Among these are four (with some subspecies) species of venomous snake.

Let’s take a closer look at the venomous snakes near Dallas you might encounter.

Texas coral snakes are not one of the most common snakes near Dallas. They’re characterized by alternating bands of red, black, and yellow stripes and can grow up to four feet long. These venomous snakes are very shy and tend to come out mostly at night, so your chances of encountering one are slim.

These snakes near Dallas are most likely to be encountered in or near a source of water. They’re dull brown, with irregular light and dark stripes, and can grow up to five feet long. Cottonmouths have a highly venomous bite and are known to stand their ground when threatened, rather than fleeing. If you encounter a cottonmouth in the wild, it’s always best to let it be.

Western diamondback rattlesnakes are most likely to be seen in hot, dry areas with plenty of brush or rocky outcroppings. They can grow up to five feet long, and come equipped with the famous rattle. They eat mostly rodents and only bite when threatened. As with the other species of venomous snakes near Dallas, it’s best to leave these impressive creatures alone.

There are several subspecies of copperhead around Dallas. These include the southern copperhead in East Dallas, and the broad-banded copperhead in West Dallas. Copperheads grow to around three feet long and can deliver a painful, venom-filled bite. Most bites to humans occur either when the snake is accidentally stepped on, or when people try to handle or kill them. If you encounter a copperhead, remember that it’s a dangerous wild animal, and should not be approached or touched. 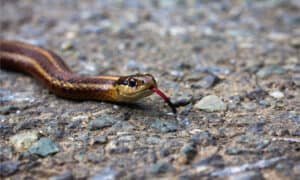 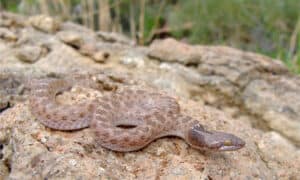 7 Snakes that Hunt at Night 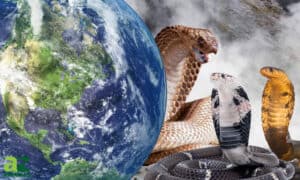 The 10 Largest Cobras in the World