7 Snakes That Give Live Birth (As Opposed to Eggs)

Do snakes lay eggs? Yes! But, it may surprise or fascinate you to learn that many species of snakes give live birth. Snakes are ectothermic reptiles that rely on the sun’s heat to warm their bodies; unlike humans, they cannot regulate their body temperatures. So, you might assume that, like many reptiles, all snakes lay eggs.

Read on to learn about seven snakes that give live birth.

There are two basic ways to make baby snakes. The first is called oviparous reproduction. In oviparous reproduction, male snakes fertilize the eggs inside female snakes. These eggs then develop inside the female until they’re reasonably sized and hard-shelled. She then lays the eggs, usually in a nest or an abandoned burrow. Depending on the species, she will either leave them or guard them and keep them warm until the snakelets hatch.

The second means of creating more snakes is called ovoviviparous reproduction. Snakes that give live birth are ovoviviparous. In these species, males fertilize eggs which then develop inside the female. But, instead of laying the eggs when they’re appropriately developed, the female keeps the eggs inside of her for the duration of gestation. When they’re ready, the snakelets hatch while still in their mother’s womb. She then gives birth to the already hatched young, who leave and begin hunting for their first meal within hours of birth.

What Kind of Snakes Give Live Birth?

Not all snakes lay eggs. Among them are vipers, boas, anacondas, most water snakes and all sea snakes except for a single genus.

Let’s take a closer look at seven snakes that give live birth.

These snakes live in the Australian states of South Australia, Victoria, New South Wales, and Queensland. Death adders are restricted to the coastal lands of southern and eastern Australia but also live in Papua New Guinea. They’re highly venomous yet non-aggressive. They have the longest fangs of any snake in Australia.

Death adders are ovoviviparous and can birth up to 30 snakelets per birth. Their primary threats are habitat loss and population loss due to the invasive cane toad.

One of the largest rattlesnakes in the world, the western diamondback lives throughout the desert southwest regions of the United States and Mexico. It is highly recognizable both by the brown and tan diamond markings along its backs and noisy rattles.

The green anaconda is one of the biggest snakes in the world. Green anacondas can grow to nearly twenty feet long and can weigh over 150 pounds. Despite their huge size, they’re not venomous, relying instead on constricting their prey to death. They just might be one of the largest snakes that give live birth.

Luckily for anyone afraid of big snakes, green anacondas only live in South America. They’re semi-aquatic and spend most of their lives in the tepid waters of rivers, swamps, and wetlands.

Garter snakes are one of the most common snakes in North America. They’re generally known as harmless, though their venom is deadly against small reptiles and amphibians. Most have brown, yellow, or pale green sides and backs, with yellow stripes running from head to tail.

Like most snakes that give live birth, garter snakes leave their mother soon after birth. Snakelets are typically around six inches long and grow to about two feet long as adults.

One of the prettier species of viper, the eyelash viper lives in South and Central America. It is a highly venomous member of the pit viper family characterized by a set of scales above the eyes, resembling eyelashes.

These slender snakes come in an endless number of colors and patterns, including gray, yellow, tan, red, green, and brown. with snakelets measuring between 7-8 inches in length. Like most vipers, they eat mostly small birds and amphibians.

Yellow-bellied sea snakes are two-toned, with black backs and yellow bellies. They have flattened tails that help them swim, as well as potent venom used to incapacitate fish. They don’t grow very big, with the biggest females reaching around three feet, but their bite certainly packs a punch.

Native to the lush tropical forests of South America, the boa constrictor is one of the largest snakes in the world. It can grow to nearly 15 feet long and weigh up to 100 pounds. Moreover, it is a popular pet in the world, and can grow to enormous proportions in captivity.

Female boas gestate their young for about four months before giving birth to around 30 snakelets. Out of all the snakes that give live birth, the boa has some of the biggest babies. At birth, boa constrictors are over a foot long.

See This Alligator Try to Eat a Child at The Zoo 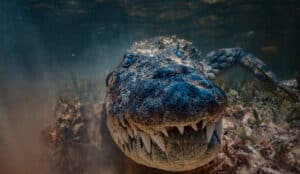