The Gaboon viper is one of the world’s largest and heaviest vipers, with the longest fangs of any poisonous snake, spanning two inches or more and hiding within the snake’s mouth roof when not in use.

This nocturnal hunter would lie absolutely motionless beneath the fallen leaves on the jungle floor as an ambush killer, waiting for its victim to pass by. The snake will strike rapidly, piercing and injecting venom into its target. The viper clings to its prey until it dies, then devours it whole, head first.

An unlucky Guinea Fowl experiences just that as it walks around a tree, not knowing what’s around the corner. A sneaky Gaboon viper named Velvet is hiding in the leaves and lunges forward towards the bird before the feathery animal can even react. The snake’s head is out in the open and yet perfectly hidden amongst the dry leaves and twigs on the forest floor.

The Smithsonian Channel caught the attack in slow motion and it’s a wild sight to see! The bird instantly gets taken down and as the snake’s venom rushes through its veins, there’s no getting away.

While the Gaboon viper doesn’t have the quickest bite, at over 20 feet per second, as the slithery critter sets its eyes on an animal, it’s nearly impossible for them to get away. Caught on camera, Velvet simply waits for the venom to do its job, all while adjusting her deadly fangs for the next kill.

From the time she attacks the bird to the time lunch is ready in only 10 minutes. Gaboon vipers unhinge their jaws before dragging their prey to a safe spot to eat. They freeze and hiss aggressively as a warning when they are scared. While human bites from Gaboon vipers are uncommon, they are typically lethal. It makes you think twice before walking near a pile of leaves.  See the jaw-dropping video below!

The Best Swimming Holes In Wisconsin 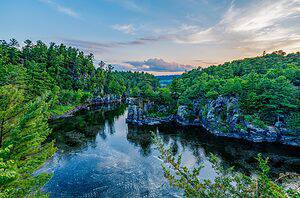