Gazelles and wildebeests have a lot of creatures to fear as they graze the wilds of Africa. Although it’s easy to imagine a lion bearing down on large mammals, smaller creatures are also capable of hunting large prey. African wild dogs and hyenas both seem like canines, but they are a far cry from domesticated dogs. Today, we’re going to take a look at the differences between an African wild dog vs hyena. We’ll talk about the things that make these animals different from one another.

Comparing an African Wild Dog and a Hyena

The 5 Key Differences Between an African Wild Dog vs Hyena

The greatest differences between an African wild dog and a hyena include their size and morphology. Hyenas weigh up to 190 pounds and stand 3 feet tall, and they have a big head, thick neck, and powerful jaws along with large ears and forelegs that are bigger than their rear legs. However, wild dogs only weigh up to 80 pounds and measure 2.5 feet tall with large, round ears that are held aloft, and mottled black, brown, and cream fur coloration.

These physical differences are just a few of the easiest ways that you can tell these animals apart from each other.

Hyenas are larger than African wild dogs. The average hyena measures between 3 and 5 feet long and weighs 90 to 190 pounds while standing 3 feet tall at the shoulder. However, the average African wild dog only weighs up to 80 pounds, stand 2.5 feet tall, and grows 3.5 feet long.

It’s clear that the hyena is a larger creature, and they’re also more dangerous than wild dogs as individuals.

The African wild dog and the hyena come from different species. Although they both look like they are close relatives of the domesticated dog, they’re very different creatures. The African wild dog’s scientific name is Lycaon pictus. This creature has 5 different subspecies throughout Africa, but their population is diminishing.

Four species of hyena exist, including the aardwolf. However, the most commonly known and numerous is the spotted hyena, Crocuta crocuta. That is also the largest of all the hyena species. Not only do these animals have significant differences in their scientific family, but they also have many morphological differences.

African wild dogs are relatively small-bodied when compared to domesticated canines as well as hyenas. However, they stay safe with the aid of their pack behavior.

These creatures are known for their large, rounded ears that they often hold aloft to hear any approaching danger. Sometimes, they are called painted dogs because their fur is mottled in a variety of colors making it look like they were used as a canvas.

Like hyenas, they only have four toes on each foot. However, hyenas have far bigger heads and necks than African wild dogs. Their powerful neck and jaw muscles hyenas to bite with a tremendous force, one of the strongest of all mammals. Hyenas also have large ears, fur that may be spotted, striped, or have a long patch of hair running the length of their backs.

Their forelegs are longer than their rear legs, so they may look off-balance when standing up and not moving. All in all, these animals are unique from each other in terms of their bodies, and that helps people tell them apart.

Hyenas are far more widespread than African wild dogs. The African wild dog is mostly found in the southeastern countries of Africa. Their range includes countries from Tanzania all the way to Chad. Most of their numbers live in Botswana, Namibia, Mozambique, Tanzania, and Kenya.

Different species of hyenas can be found throughout large swaths of Africa. They are most common in the sub-Saharan regions of the eastern portion of the continent. Some species of hyena live in the Middle East and India, too!

African wild dogs and hyenas both primarily eat meat. They can both take down antelopes, warthogs, rodents, and more. However, hyenas are larger and more powerful, and they have a better chance of defending their kill against other carnivores.

Still, the aardwolf is unique in that it eats larvae and insects rather than focusing on large prey. All in all, hyenas have a more diverse diet than African wild dogs, but the wild dogs have a higher hunting success chance.

Several differences exist between an African wild dog vs hyena. Generally speaking, hyenas are larger, live in a wider area, and have significant morphological differences. Now, you should be able to easily identify these creatures and realize that not all canids are the same. 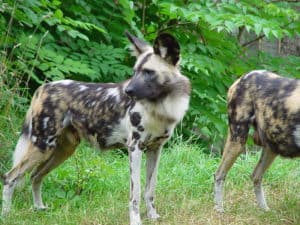 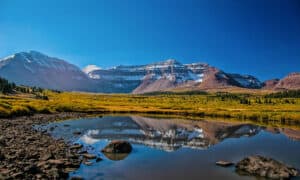