Written by Jennifer Gaeng
Updated: October 25, 2022
© iStock.com/JohnCarnemolla
Share this post on:
More Great Content:
How High (And Far) Can A Kangaroo…
Jacked Kangaroo: Just How Strong Are Buff…
What’s a Baby Kangaroo Called & 6…
Wallaby vs Kangaroo: More Than Just Different…
Pet Kangaroos: Is It Legal & Is…
Kangaroo Paws, Hands &Claws: Everything You've Ever…

Kangaroos are magnificent creatures that can be found mainly in Australia, throughout Papua New Guinea and New Zealand. Many people often wonder about the danger posed by these enormous mammals, given their strong stature and large feet. Kangaroos can, in fact, be quite dangerous in certain situations, but they don’t pose a threat to humans overall.

Kangaroos are normally gentle creatures who will only attack if provoked or if their young are in danger. However, they have powerful hind legs, and deadly claws that can inflict permanent damage. Therefore, kangaroos can be incredibly dangerous.

In fact, humans are more of a danger to kangaroos than they are to us. Sadly, hunting and vehicle accidents are among the most common threats to kangaroos. So, it’s no wonder kangaroos can become aggressive towards people if they feel threatened. Even if the chances of this happening are quite remote, we must remain cautious in their presence.

Do Kangaroos Drown People or Prey?

Kangaroos are not very afraid of predators, except for people and dingoes. Wild dogs are native to southeast Asia and commonly found in Australia.

As a defense mechanism, a larger kangaroo will usually push its pursuer into the water, standing submerged to the chest and attempting to drown the aggressor.

Are Kangaroos Dangerous to Pets?

Are kangaroos dangerous to dogs or cats?

Several incidents of kangaroos attacking dogs have been reported, with the marsupials attempting to drown the attacking pets and even inflicting injury on owners attempting to rescue their canines.
The fact is that canines have a tendency to give chase when they see a kangaroo which they remind of a dingo, its natural foe.
Hence, it’s important to keep your pet firmly leashed, when strolling through territory frequented by these marsupials.

Do Kangaroos Box or Punch?

Male kangaroos frequently fight for mating dominance. This ritualized fight between male kangaroos is often compared to boxing. However, kangaroos don’t usually try to box or punch. They would rather balance on their powerful tails and kick with their muscular back legs. A kangaroo can rear back, throw all its weight on its tail, and kick a human so hard that it takes your breath away.

Regardless, you should never attempt to box a kangaroo. Kangaroos could potentially disembowel someone and would not waste time boxing around with someone antagonizing it.

Do Kangaroos Have Any Predators?

The only natural predators to the kangaroo are dingoes, humans, wedge-tailed eagles, and Tasmanian tigers. Carnivores, like foxes and wild dogs, prey on juvenile kangaroos, and other herbivores compete with them for food.

Kangaroos are not typically territorial. They are organized into a dominant hierarchy, with more dominant individuals having better access to food and shade. In heavily inhabited places, larger groups can be encountered, and females are frequently accompanied by a male.

Why Are Kangaroos So Muscular?

Kangaroos have a unique and peculiar stride when they hop around, and the way they do so naturally provides them with a lot of muscle. This is because kangaroos use the muscles and tendons in their hind legs and massive back feet to propel themselves forward.

They also demonstrate their intellect as well as strength by bouncing around on their hind limbs while leaving their front limbs free to hit would-be attackers or prey.

Can Kangaroos Be Friendly?

Beach bum kangaroos are occasionally spotted and are known for being amiable and approachable. However, they, like a dog, only want to be fed. This is not a chance for you to share your meal, no matter what puppy dog eyes you believe you’re seeing.

Kangaroo groups, known as troops, spend a lot of time kissing, hugging, and grooming each other. This conduct alone demonstrates the family’s strong social dynamics, much alone the love and care they show for one another.

Do Kangaroos Sacrifice Their Babies?

When a mother kangaroo has many babies, also called “joeys,” she may not be able to support all of them during difficult periods when supplies are short and may sacrifice one to save the others.

How To Defend Yourself Against A Kangaroo

The best defense against any threat is “don’t be there.” However, if someone were to meet an aggressive kangaroo, it is possible to make it out safely. Some experts say the best chance to survive is to take a step back and keep a strong and calm demeanor. Try to imitate the kangaroo as closely as possible. A thick, strong grunt noise may also scare it away. Male kangaroos use this strategy to demonstrate their dominance in the wild. 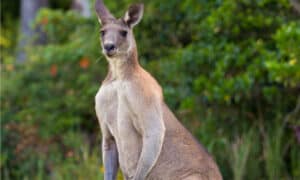 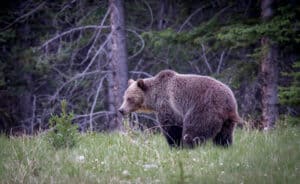