The baby sugar glider is a tiny and adorable creature with many interesting traits. Did you know they are the size of a grain of rice at birth or that they grow extremely quickly? How about that they’re almost always born in pairs?

There are so many new things to learn about baby sugar gliders! Let’s jump into six awesome facts and some adorable pictures!

#1: A Baby Sugar Glider is Called a Joey!

More Great Content:
Blue Whale Size Comparison: Just How Big…
English vs American Golden Retriever: 5 Differences
Boston Terrier vs Pug: 5 Key Differences
The 10 Largest Man-Made Lakes in the…
The Top 9 Largest Flying Birds in…
Are Otters Dangerous?
The 15 Deepest Lakes in the United…
10 Spiders in Georgia
10 Spiders in Indiana
10 Spiders in Illinois
King Cobra vs Mongoose: Who Would Win…
The 10 Most Dangerous Dog Breeds in…
The 7 Most Aggressive Sharks in the…
The 10 Longest Rivers in North America
Aussiedoodle vs Goldendoodle: 5 Key Differences
King Cobra vs Lion: Who Would Win…
Inland Taipan vs Mongoose: Who Would Win…
Australian Shepherd vs Australian Cattle Dog: What…
Roman Rottweiler vs German Rottweiler: 8 Differences
Discover 6 of the Clearest Rivers in…

In human pregnancies, there’s no doubt that it’s more common to have a singleton baby than a set of twins. However, sugar gliders are quite the opposite.

For the pregnant female sugar glider, having twins is the norm. Sugar gliders can occasionally give birth to one baby, but their litters never exceed two baby sugar gliders. This adaptation ensures that the tiny marsupials can retain their gliding abilities and avoid getting weighed down.

Despite their names, baby sugar gliders cannot glide or ‘fly’. It’s not until they are around 100 days old and fully matured that they attempt to take flight. Sugar gliders have skin that stretches from their ankle to their wrist that creates a parachute-like effect and allows them to glide freely through the air. Some sugar gliders can even change the movement of this skin to change direction in flight.

Much like kangaroos, mother sugar gliders keep their babies in a special pouch called a marsupium. The pouch is on the female sugar glider’s midsection and does not have an opening.

Instead of ‘opening’, the pouch rather expands around the baby sugar glider tightly enough to keep it secure so that it won’t fall out. The babies are born underdeveloped and they need lots of nurturing before they will be ready to take on the world without mom’s built-in bedroom.

Sugar glider joeys don’t need to leave the pouch to eat. Female sugar gliders produce milk for their babies from milk that’s located inside their marsupium, or pouch. Sugar glider mothers have anywhere from two to four nipples.

Animals that are active at night and sleep during the day are called nocturnal. Some nocturnal animals even have special adaptations that help them be more productive over the course of the night.

What are baby sugar gliders called?

How much do baby sugar gliders weigh?

A joey weighs about as much as a grain of rice which is less than half a gram. However, over the course of only 6 months they grow to their full grown size and weigh somewhere between 80 to 160 grams.

What do baby sugar gliders eat?

While in their mother’s pouch, joeys drink the milk that their mothers produce until they are around 8 weeks out of the pouch at which time most will be fully weaned. After they are weaned they are opportunistic eaters, which means they eat what they can. However, one of their favorite foods is eucalyptus gum. They also eat bugs, plants, and other small animals.

Where do baby sugar gliders live?

These baby animals live in the pouches their mothers provide, it’s a natural bedroom. In general these babies love to hang out in cool places. As adults, they live in trees primarily in Australia and Indonesia. 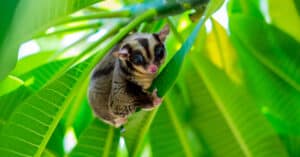