ANURAK PONGPATIMET/Shutterstock.com
Share this post on:
More Great Content:
Male vs Female Betta: What are the…
Watch an Eagle Attack A Trespassing RC…
Discover the One Place on Earth that…
What Kills Bed Bugs Instantly?
Watch a Fierce Grizzly Battle Over Whale…
Is Mandevilla A Perennial Or Annual?

If you want a pet with a healthy dose of flair and style, look no further than the betta fish! These small but flamboyant fish own whatever space they’re in, whether a simple fishbowl or a large tank. Because of their aggression, however, they make better companions to humans than to other fish. So what happens when they want to mate? Do they eat their own young? How long are betta fish pregnant, and how many fry do they typically have? Discover the answers to these questions below!

Bettas are small, colorful fish belonging to the Betta genus in the Osphronemidae family. Scientists classify them as ray-finned bony fishes. The most common species of betta fish is the Siamese fighting fish. Its scientific name is Betta splendens meaning “beautiful warrior.” Next to goldfish and guppies, bettas are some of the most common aquarium pets.

Humans bred this species to be more aggressive than it normally would be in the wild, pitting bettas against each other for sport. Today, they are bred for various colors and tail patterns. Males remain more aggressive on average than females.

At least 72 other species exist within the Betta genus, including:

Betta tails are some of the showiest in the animal kingdom. Common tail types include veiltail, crowntail, combtail, double tail, halfmoon tail, over-double tail, and delta tail. Males use their bright colors and intricate tails to attract females and intimidate males. However, in the wild, these characteristics are much more subdued, as they would attract too many predators and slow down the betta.

Adult betta fish reach between 2-3 inches in length, with 2.5 inches (6.35 cm) being the average. Male bettas tend to be slightly larger than females.

Betta fish are carnivores and therefore can’t live solely off plant matter. Wild bettas eat mostly insects, insect larvae, zooplankton, and small crustaceans. Bloodworms are a common source of nutrition that can also be fed to pet bettas. In captivity, a betta’s diet may include betta-specific fish flakes and pellets as well as various freeze-dried foods. As with any animal, too much food will cause health problems.

Being small, bettas have several predators in the wild. Possible predators include larger fish, birds like kingfishers, cats, turtles, snakes, frogs, newts, and salamanders. Male bettas may also attack and kill each other.

Betta fish are native to Thailand, though they are also common in countries like Malaysia, Vietnam, Myanmar, Indonesia, Cambodia, and Laos. They live around the world and are an invasive species in some countries. They prefer the shallow waters of marshes, ponds, slow-moving streams, and rice paddies. As freshwater fish, they can’t typically survive in salt water.

Betta fish owners should keep the temperature of their fish tank between 75-80 degrees Fahrenheit. Colder water can kill betta fish by slowing their immune systems, while warmer water can shorten their lives by increasing their metabolism. Heated aquariums with calm water provide the best environments for betta fish.

True to their name, Siamese fighting fish can be extremely aggressive toward other fish, especially males. This behavior is typically more prominent in domesticated males. Females may get along with each other, though their behavior should still be monitored. Male betta fish should never be kept in a tank together or with males of other species. As males are more flamboyant and therefore more popular as pets, this usually means keeping your betta fish in a solitary environment.

Male and female betta fish will typically live together peacefully. If you are open to breeding your fish, then it should be fine to keep them in the same tank.

Betta fish reach sexual maturity at about 3 months of age. These fish are oviparous, meaning the female gives birth to eggs which then hatch outside her body. Because they do not give birth to live young, bettas are never technically pregnant.

Male bettas build a bubble nest or foam nest in preparation for the eggs. They do this by using their labyrinth organ (an organ that acts like a lung) to blow saliva-coated bubbles in the water. Then the male and female engage in a mating dance that culminates in the female laying her eggs. Scientists call this process “spawning.”

The male fertilizes the eggs as soon as they emerge, then brings them to the bubble nest in his mouth. He tends the nest without help from the female. Betta eggs usually hatch in 1-3 days. They survive on the egg yolk until they are ready to begin seeking other food sources.

Betta fish can live to be 2-6 years of age, though the average is 3 years in captivity.

How Long Are Betta Fish Pregnant?

Though betta fish are never actually pregnant, they do carry their eggs around in their ovipositor for 1-2 weeks before mating. When they are ready to mate, they release the eggs into the water to be fertilized. Females have nothing to do with their young after the eggs are released, leaving the fertilization and care of the eggs to the male.

How Can You Tell If a Betta Fish is Pregnant?

A gravid female will also display behavioral changes. She typically becomes more interested in the male and his bubble nest. She may even destroy it if she doesn’t like the way it was built! Her lethargy will increase as the time for laying eggs approaches.

How Often Can a Betta Fish Get Pregnant?

Female betta fish can release eggs every 2 weeks through her egg spot. She does not need a male to do so, though she will usually reabsorb the eggs if they remain unfertilized. Males will attempt to fertilize any eggs in the tank. They continue to care for all eggs and fry, even if new ones appear.

How Many Fry Can a Betta Fish Produce?

Betta fish typically lay between 30-100 eggs at a time, though in rare cases, they can lay up to 500. Not all the eggs will hatch, especially in the wild, where predators abound. Nevertheless, pet owners need to be aware of the potential population explosion in their tanks and how to manage it. Too many fish in one tank, especially too many males, will result in health problems and cannibalism. Unfortunately, it is common for betta fish to eat their own eggs.

When choosing your betta fish at the store, be sure to inquire about their sex. If you get a male and female together in the same tank, you may very well become the owner of dozens of new bettas! 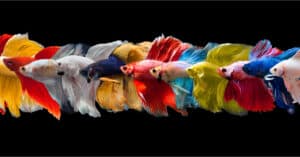 Male vs Female Betta: What are the Differences?