The American bison is the national mammal of the U.S. Bison are easily the largest mammals found throughout North America—they reach heights of about six feet and weigh an almost unimaginable 2,000 pounds on average.

In Yellowstone National Park, bison have been thriving since prehistoric times. In the last 50 years, the bison population in Yellowstone has been steadily growing. In 1970, there were only 500 bison in the park but today, there are well over 5,000.

Interestingly, the tail movements of bison are quite telling when it comes to how they’re feeling. The most natural posture for the tail is when it hangs down—it twitches a bit, and this signifies a calm mood. However, when the tail is erect, there is trouble afoot. That bison is likely to charge.

Why You Should Leave Bison Alone at Yellowstone

This video opens with a rare shot—there is a bison in the foreground standing on grass. The thing is, it’s right next to a busy road where several cars going in both directions are stopped. Perhaps that’s not so unusual considering it’s Yellowstone, but there are also some young children and adults walking on the road between cars.

The bison seems oblivious to the traffic and keeps its stance, with its tail down as it looks over toward the person filming. Bison are generally respected in Yellowstone—well, they have to be because it’s their territory. “They go where they want when they want,” says the narrator.

The National Park Service always tells humans to keep far from bison. The problem with humans is we don’t always follow the rules and that’s usually because we don’t understand the repercussions of not following those rules.

The video shows several tourists standing on the shoulder of the two-way road with cameras in hand as they take in the sight of bison. They get much, much too close to risk a photo, not considering that bison are unpredictable and will charge at a moment’s notice.

The video cuts to a clip of a man who thought he was cleverly sneaking up on a bison behind a tree. The bison spotted him, charged him, and sent him flying into the air. The video cuts to another clip of children standing mere feet from bison and having to turn around and sprint away when one starts charging.

The moral of the story: You can always get quality shots of bison, but you should only do so from a safe distance.

Up Next, Learn More Facts About American Bison and What Sets Them Apart!

See A Lion Cub Adorably Bully A Baby Tiger, and Then Sit on Her 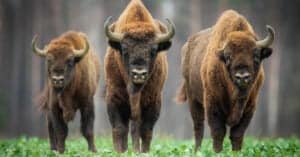