You likely already know what spiders you shouldn’t mess with, but what’s the difference between a black widow spider vs brown recluse spider? Both of these are regarded as some of the most dangerous spider species living on the planet today, but how can you learn to tell them apart so that you can keep yourself safe?

In this article, we will address all of the differences between black widow spiders and brown recluse spiders including their appearance and behaviors. We will also address where they are found in the world and what habitats they typically occupy so that you can make yourself aware. Let’s get started and learn more about spiders now!

Let’s go over all of these differences in more detail now.

These two spiders also have different habitat preferences. Black widows enjoy dry climates and hiding under clutter. Brown recluses are found in more humid locations and in populated areas. You will often find a brown recluse in a shed or a closet, or even under piles of cardboard. Black widows prefer outdoor areas such as wood piles.

Compared to the brown recluse, black widow spiders live longer. The former has a lifespan ranging from one to two years while the latter can live as long as three years or even five. It is worth noting, however, that male black widows only live for about a quarter or a third of a year.

Both arachnids are prolific reproducers. The female brown recluse usually mates in summer and lays several egg sacs each containing 40 – 50 eggs each spring. Its newly hatched offspring will take 12 months to grow to full maturity.

Unlike the brown recluse, black widow spiders lay their eggs in summer. During this period, a mother may lay as many as ten egg sacs each containing 100 – 400 eggs. The little spiderlings which make it out of eggs which haven’t been gobbled up will mature in about six to nine months.

While both of these spiders prefer to be left alone by humans and other animals, there are some behavioral differences between the two. For example, brown recluses live up to their name and prefer to live a reclusive life without confrontation, while black widow spiders can be aggressive if protecting their eggs.

Even though this isn’t a hard-and-fast rule, and both types of spiders will bite if they are surprised, you are more likely to be bitten by a black widow spider and a brown recluse spider. Brown recluses often bite out of fear or accidentally when they are pressed against skin. Black widows lunge more often than brown recluses.

A final difference between black widow spiders and brown recluse spiders has to do with their venom levels and the way in which their venom interacts with the human body. While both of these spiders are very venomous and should be avoided, black widow spider bites cause swelling and fevers, while brown recluse spider bites cause tissue death and decay. No matter what, you won’t have a good time if you are bitten by either of these two spiders!

Watch a Dolphin and a Dog Become Best Friends 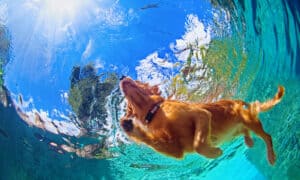