Victor Arita/Shutterstock.com
Share this post on:
More Great Content:
Bobcats in Michigan: Types & Where They…
Bobcat vs Lynx: The 4 Key Differences…
Watch a Bobcat Fight a Rattlesnake to…
Bobcat Size Comparison: How Big are Bobcats?
Are Bobcats Dangerous?
What Do Bobcats Eat?

Bobcats are undeniably stunning creatures that mirror a healthy habitat. These wild cats are prevalent in North America and are even hunted with minimal restrictions. In fact, bobcats have more population than any other wild cat species on the continent. That said, they are present in almost every United States state except some parts of the Midwest. Since the wild cat’s soft fur was hunted vigorously during the 20th century, its population decreased in some way. Fortunately, this species thrives today and currently has a population of 2 to 3 million in the country alone.

Since Georgia’s topography consists of habitats that bobcats prefer, the state has an active population of bobcats that are also available for hunting. So, if you’ve ever wondered if there are bobcats or any wild cats in the state, this article gives answers. Discover everything you need to know about bobcats in Georgia, where they live, bobcat hunting, and other facts.

The southern half of North America is home to various settings where the medium-sized bobcat can be found. The major distinction between these widespread, adaptive predators and the larger, more northerly-dwelling Canadian Lynx is that the bobcat only has a tiny, “bobbed” tail, which gives it its name. The bobcat, roughly twice as big as a domestic cat and has the widest range of any North American felines, is rarely seen by people due to its shy disposition.

Today, 12 subspecies of bobcats are recognized, each with distinct coloration and geographic distribution. Bobcats in mountainous forests have darker coats and more markings than their lighter-colored counterparts found in more arid, semi-desert areas.

Are There Bobcats in Georgia?

Bobcats are the only wild cat species found and native to Georgia. These felines are spread statewide and occupy various habitats.

Georgia has five unique geographic regions and hundreds of different kinds of plants and animals. Mountain ranges, coastal plains, beaches, wetlands, swamps, and estuaries can all be found in the state. There have been more reports of wildlife sightings as human activity spreads throughout the state.

The highlands of North Georgia are home to the bobcat, a native species. Except for a few areas in the Midwest, it is the only wild cat with an active population in Georgia and is found in almost every state in the union. Bobcat dens can be found in trees, hollow logs, rock heaps, or caves.

Where Do Bobcats Live in Georgia?

Bobcats are present over the whole state of Georgia. Due to the diversity of their prey, they may live in a wide range of habitats. In Georgia, mixed-forest and agricultural regions with a significant proportion of early successional stages make up the typical bobcat habitat. The size of the bobcat’s home range is determined by its gender and the habitat’s quality.

In their natural habitat, bobcats can be found in many settings, including mountain woodlands, coniferous forests, marshes, and occasionally suburban areas. However, they are known to prefer rocky, densely vegetated hillsides.

To relax during the day before beginning to hunt at dusk, they typically make their homes in areas of dense vegetation, hollow trees, or rock crevices. Males generally have far bigger home ranges than females, some exceeding 10 square miles. The home range of a female may be smaller than one square mile. However, the home ranges of bobcats might overlap between the sexes.

While hunting for wild cats is prohibited in other jurisdictions, such as California, bobcat hunting is permitted in Georgia but only between December 1 and February 28. Although a license is necessary, there are no daily or seasonal bag restrictions. Bobcats are considered both game animals and furbearers in Georgia. As a result, bobcat hunting and trapping are permitted during set seasons. Using dogs and hand-made predator calls are two methods of bobcat hunting. Trappers kill between 1,200 and 1,800 bobcats yearly, while hunters kill three to five times as many.

The market price of bobcat pelts fluctuates according to factors such as demand, fur quality, color, quantity, spot brightness, and pelt size. From 2000 to 2006, bobcat hunters and trappers received between $25 and $70 per pelt, depending on the size, color, thickness, and spottiness of the animal’s fur.

Are Bobcats a Problem in Georgia?

Bobcats hardly ever create a nuisance and typically stay away from places with a lot of human activity and development. However, these felines are more likely to come to your property if food is nearby. Although they infrequently prey on smaller livestock like goats or chickens, they are not a significant problem.

Generally, bobcats prey on rodents, small reptiles, and rabbits. They prefer to eat close to their homes, but if prey is in short supply, they will forage in backyards, farms, and homesteads.

The ideal time for your pets to go outside without encountering bobcats is during the day. They hunt at dusk and dawn frequently since they are nocturnal predators. Bobcat interactions can be avoided by keeping your pet inside at night and keeping them under your supervision outside. Mastiffs and Great Danes, for instance, are more resistant to attacks since bobcats wouldn’t risk hunting animals larger than them. However, a Chihuahua or house cat lounging outside would not be as fortunate if a bobcat discovered them.

Are Bobcats Aggressive in Georgia?

Don’t worry, bobcats don’t attack humans; at least, they are not known to. While bobcat assaults are incredibly rare, no one should try to approach or handle a wild bobcat or her offspring. Because of their timidity and need for cover, they are generally unnoticed. Because of this, bobcat attacks on people are essentially unheard of, and they coexist peacefully with big human populations.

Nevertheless, bobcats can get rabies, which makes them hostile and act out of character. Rabid wild cats are known to occasionally attack people with their claws and teeth, and they may also do so if they feel threatened while their pups are present.

Mountain Lion vs Bobcat: Who Would Win in a Fight? 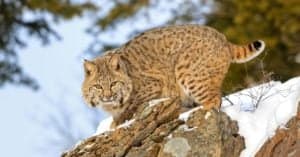