Caiman vs Crocodile: Can You Tell the Difference?

When looking at a caiman vs crocodile, you may be wondering how you can tell the difference. While both of these reptiles look strikingly similar, they actually belong to different species, and you can tell this based on their sizes and preferred habitats. But in what other ways do they differ from each other?

In this article, we will address all of the differences between caimans and crocodiles, including their diets, lifespans, and appearance. By the end of this article, you should feel confident in your knowledge of these two carnivores. Let’s get started!

Key Differences Between Caiman vs Crocodile

There are many key differences between a caiman vs crocodile. Caimans are smaller than crocodiles as a whole, with a U-shaped snout compared to the V-shaped snout of a crocodile. The habitats of caimans and crocodiles also differ, with crocodiles found around the world and caimans found only in Central and South America. Finally, crocodiles tend to outlive caimans by a large margin.

Let’s discuss some of these differences in more detail now.

Both caimans and crocodiles can be traced back to dinosaurs, and they haven’t changed much from an evolutionary standpoint over the past 200 million years. This is remarkable when you consider how many other animals have evolved and changed!

Crocodiles and caimans can be very difficult to tell apart upon first glance. However, there are some physical differences that are evident right off the bat. For example, caimans have a smaller body compared to crocodiles on average. You can also tell the difference between a caiman and a crocodile based on their snout shape.

The average caiman reaches anywhere from 10-600 pounds and grows 5-19 feet long, while crocodiles weigh 50-2,000 pounds and reach lengths of 5-25 feet long. While it depends on the specific type of crocodile, the caiman rarely grows to be as large as a crocodile does. However, you are unlikely to notice this unless you are looking at the two side by side!

Caiman vs Crocodile: Behavior and Diet

There are many differences between a caiman versus crocodile when you consider their behavior and dietary preferences. For example, caimans eat fish, crustaceans, waterfowl, and capybara, while crocodiles eat fish, crustaceans, deer, and buffalo if they are large enough. The size differences of these two reptiles is often what determines what they eat, with caimans eating much smaller prey compared to crocodiles.

While both of these creatures require sunlight and warmth in order to survive, there are certain types of hunting differences between caimans and crocodiles. For example, the majority of crocodile species hunt in the water, given that they are more capable in this environment, but some caiman species are capable of hunting on land. Both caimans and crocodiles prefer to hunt at night. They are also extremely territorial and violent during their respective mating seasons.

Crocodiles live in freshwater and saltwater environments, such as freshwater marshes, rivers, lakes and mangrove swamps. Caimans live in rivers, lakes and swampland throughout Central and South America, and they tend to avoid other species of caimans or crocodiles so that there are plenty of food resources for everyone.

Some species of caiman burrow in mud if their watery environments run dry, and some species of crocodiles are capable of climbing trees. The location and habitat of these two reptiles greatly affects their behavior and hunting habits, so it is always fascinating to look at their species or types in greater detail.

A final difference between a caiman vs crocodile is their respective lifespans. A caiman lives an average of 20-40 years, while crocodiles live an average of 20-70 years. The crocodile likely outlives the caiman due to its larger size and fewer threats to it as an apex predator. Caimans are excellent predators on their own, but their small size often makes them vulnerable, especially at young ages. 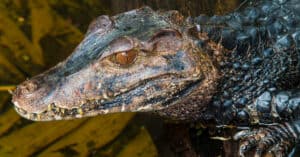 Discover The Largest Caiman Ever

Discover The Largest Caiman Ever 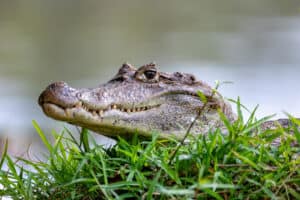