Derek R. Audette/Shutterstock.com
Share this post on:
More Great Content:
Coyote Scat: How to Tell if a…
Coyote Howling: Why Do Coyotes Make Sounds…
What do Coyotes Eat?
Coydog - Coyote Dog Mix: Everything You…
Coyote vs Wolf: The 6 Key Differences…
Pet Coyotes: Do Not Try This! Here's…

A coywolf is a canid hybrid of coyotes, eastern wolves, and gray wolves. According to genomic research, all North American gray wolf populations share a mixture with coyotes, with the lowest amounts seen in Alaska and the greatest in Ontario, Quebec, and Atlantic Canada. Keep reading to learn everything you need to know about this hybrid.

Is the Coywolf Real?

If you are wondering whether the coywolf is a real animal, the answer is sort of. Genetically, these canines can interbreed because they are all closely related. So, the interbreeding between coyotes and wolves can, does, and is currently happening. However, a perfect mix of coyote and wolf is not an actual thing. Keep reading to understand.

What Is the Coywolf?

To fully understand how a coyote and wolf would procreate to make a coywolf, you must first understand the genetic blending that has been taking place between these species.

As an example, new DNA research shows all eastern coyotes are a combination of coyotes, wolves, and dogs! So, there are three distinct species intermingled into the hybrid commonly referred to as the coywolf. The percentages vary depending on the test and the dog’s region.

But why is this?

The Coyote Wolf Mix and Genetics

When coyotes first appeared in Vermont in the 1940s, they came from the West and bred with wolves. A larger coyote accompanied their arrival, far larger than any previously observed.

Today’s hybrids are diluted. According to genetic tests, these hybrids are 60-84 percent coyotes, 8-25 percent wolves, and 8-11 percent dogs in the northeast. The mix varies from south to east. Southern coyotes contained a combination of wolf and dog genes, while Virginia coyotes had more dog than wolf genes. Tests show that some eastern coyotes have almost no wolf in them.

When they are merely a mix of coyotes and dogs, they are classified as “coydog” and not a “coywolf.” The coydog is a new interbreed that is commonly misunderstood due to human breeding. For example, a coydog is a term people used to describe a combination of a coyote and a domestic dog, but they also exist in the wild.

Using ambiguous terminologies like coywolf and coydog might be confusing. A new genetic organism is not a new species. These “coywolves” are a population of coyotes with non-coyote DNA mixed.

Why Do Coyotes Breed with Wolves and Dogs?

The eastern coyote has never been observed breeding with dogs or wolves. The coyote, wolf, and dog are three species that do not want to breed even though they are biologically close enough to interbreed.

Their DNA shows coyotes mated with wolves approximately one hundred years ago and with dogs about 50 years ago.

Then, why do they breed?

A century ago, wolf populations in the Great Lakes were so low that some females couldn’t find a wolf companion and had to settle with a coyote.

Eastern coyotes can now easily find a coyote mate extremely easy. Its population continues to thrive in its new woodland home, and it seems to prefer killing dogs over breeding with them. The wolf is now the coyote’s deadliest opponent, not its last chance partner.

Species hybridization is a natural evolutionary process. Most of them die, being a compromise between two long-established species well-adapted to their habitats. However, in today’s quickly changing environment, new varieties may outperform previous ones.

For example, to manage the overabundance of deer in the eastern forests, the coyote with wolf genes is more suited. Their descendants became the eastern coyote after dispersing eastward. It’s unclear which dog and wolf genes have survived natural selection in today’s eastern coyote.

The bottom line on coywolves

Some people use the term “coywolf” as a colloquialism. As with other colloquial names, there is some truth to this moniker, but there is also a lot of misinformation associated with it.

For the time being, we have the eastern coyote, a fascinating new hybrid of coyote undergoing an incredible evolutionary transformation. Call it a “subspecies,” or by its scientific name, Canis latrans var to distinguish it. It’s one thing to call it a Coywolf; quite another to understand exactly what it is! 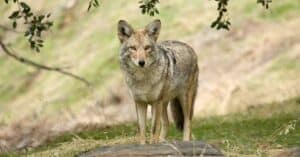 Coydog – Coyote Dog Mix: Everything You Need to Know About This Hybrid