Written by Emilio Brown
Published: September 8, 2022
© iStock.com/leonello
Share this post on:
More Great Content:
7 of the Largest Prehistoric Animals Ever…
Discover the 8 Smartest Dinosaurs Ever to…
Meet Every Dinosaur Featured in Jurassic World…
Top 10 World’s Largest Dinosaurs Ever
9 Dinosaurs With Long Necks
Meet the Largest Carnivorous Dinosaur in History…
↓ Continue Reading To See This Amazing Video

Fossils are not only important in dating the period that the dinosaur lived in, but they also help us understand how dinosaurs interacted with the world around them. Horns are a common trait in ceratopsian dinosaurs, and it was rare for other types of dinos to have this feature. The 10 dinosaurs on this list all have horns, but each species has its number and placement to give them an amazing look.

Carnotaurus is a genus of dinosaurs with horns that only has one species, Carnotaurus sastrei. This species is also one of the only horned carnivorous dinosaurs. The  Carnotaurus lived in South America 69 to 71 million years ago in the Late Cretaceous period. As a theropod, the Carnotaurus walked upright on two legs but was not feathered. Only one fossil of the Carnotaurus has been discovered, but it is nearly complete. The Carnotaurus sastrei fossil was well preserved enough to have impressions of its skin, showing it was scaly like a lizard.

Standing at around 29 feet tall ( 9 meters), Carnotaurus sastrei weighed around 3309 lbs (1500 kgs). This species had a small head with a stubby snout and one horn above each eye. The Carnotaurus preyed on small prey, or even large ones like Sauropods. The horns of this species could have been used for hunting or protecting its head and thick neck.

One of the horned dinosaurs that roamed the earth during the Late Cretaceous period was the Machairoceratops. This species is a member of the Ceratopsidae family, similar to many other horned dinosaurs. Macharioceratops lived in North America, with its fossils getting undug in southern Utah. Its name combines Greek words, ‘ceratops’ and ‘machairis,’ which mean bent sword honored face together.

Growing up to 26 feet (8 meters) long, this dinosaur weighed 2,000 to 4,000 lbs. The skeleton found in this species was of its skull, which was incomplete. This species had horns over its eyes and a curved crest on its head.

The Torosaurus is a genus of Ceratopsidae dinosaurs with horns that lived during the Late Cretaceous period. Two species exist within this genus:

Only seven fossils of these dinosaurs have been unearthed, as they are a very rare species. Torosaurus was once thought to be the same species as the triceratops, as they have a similar fossil skull. It took years of research into their skeletons for paleontologists to confirm that the fossils of these species were not the same dinosaur.

The Torosaurus was a large Ceratopsian that weighed up to 13,000 lbs (5896 kg) and had a length of around 30 feet (9.1 meters). This species had one of the largest heads of any land animal, around 9 feet long (2.7 meters). On their head were two large horns and a large frill above their eyes. As more evidence of these dinosaurs is revealed, more information may in the future reveal if this species is truly its own.

First discovered by Jack Horner in 1987, the Achelousaurs is a Ceratopsian species alive during the late Cretaceous era. Discovered in Montana, this dinosaur lived across what is now North America. They were herbivores and used their large size and horns to defend themselves. This species was found as a fossil near other dinosaurs, showing they traveled in herds.

Not the largest of the Ceratopsian dinosaurs, the achelousaurus was around 20 feet long and weighed around 6,600 lbs (2993.71 kg). This species has no horns on its brow but on they are located on the top of its frill. On their nose was a large bony knob, and they had a beaked mouth.

The Pachyrhinosaurus is a horned dinosaur that lived during the Late Cretaceous period. Three different species of this genus have been discovered, which are P. canadensis, P. lakustai, and P. perotorum. These dinosaurs lived in what is now North America and traveled together in groups. Similar to other Ceratopsian dinosaurs, they were herbivores. Fossils of this species are usually found with other specimens, showing they traveled in groups.

What makes the Pachyrihinsouars unique is the large bony lump on its nose. The horns on their face were much smaller than other horned dinosaurs, and they had large frills on their heads, with smaller ram-like horns atop their heads. At their largest, the pachyrhinosaurus grew to be around 26 feet (7.9 meters)  long and weighed up to 8,800 lbs (3991 kgs).

One of the smallest of all Ceratopsidaes to be discovered is the Avaceratops. They were estimated to reach a length between 7.5 to (2.3 to 4.2 meters) as an adult. The fossils of this species were discovered in Montana, and the fossil found had other dinosaurs nearby, letting us know they roamed North America in groups.

As one of the largest skulled animals in the world, the Pentaceratops had a skull that reached up to 10 feet (3 meters) tall. They were a large member of the Ceratospidae family, growing around 25 feet (7.62 meters)long. The Pentaceratops is known for its large skull equipped with 5 horns. Few fossils of this dinosaur have been uncovered, and most were found in San Juan New Basin in New Mexico.

This dinosaur was a herbivore and fed on low-lying plant material. Their sharp beak was useful in eating large plants like ferns and conifers. Pentaceratops lived during the Creatcaseous periods 83.5 to 66 million years ago and roamed North America.

Named after the area it was discovered, the Albertaceratops is a Ceratopsian dinosaur that lived in North America. First discovered in Alberta, Canada, two fossils uncovered from the earth are how we know about this species. Alive during the late Cretaceous period, they were herbivores and walked on all fours.

At around 19 feet (5.7 meters) long, Albertaceratops weighed around 7,700 lbs (3492 kgs). This dinosaur had long brown horns and a large frill. Their mouth is a bird-like beak, and on their nose is a bony knob. The horns on their head were thought to be used for dueling or showing off.

The Triceratops is one of the most well-known dinosaurs from the Cretaceous period, living in what is now North America. Belonging to the Ceratopsidae family, two species of this genus have been discovered:

Fully grown, the triceratops reaches around 30 feet (9.1 meters) long and stands at around 9.8 feet (2.9 meters) tall. They had a large frilled head and horns from their nose and above their eyes. The horns of this species were long, growing up to 4 feet ( 1.2 meters). The triceratops’ horns were used for dueling and defending themselves against other dinosaurs.

Kosmoceratops means “ornate horned face” in Greek and is the dinosaur with the most horns. This species lived around 76 million years ago during the Late Cretaceous period. Living in what is now North America, the Kosmoceratops has 15 horns in total, and Southern Utah is where this species was uncovered in the Escalante National monument.

The horns on this species were not to fight with but were more ornamental. The 15 horns were more likely used to impress mates and intimidate fellow dinosaurs. Ten horns are located on the top of the Kosmoceratops frill, and a horn is above each eye. Their frill is smaller than other Ceratops dinosaurs. 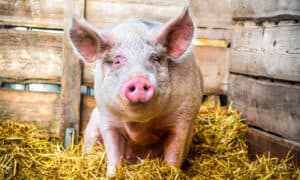