Although Texas is one of the states in the U.S. with deserts, its entire land area contains less than 10% of deserts, while the rest are mainly grasslands, forests, and coastlines. This diverse land area and geographic features have allowed Texas to be a haven for numerous people from contrasting backgrounds. The Lone Star State, as it has been nicknamed, is the second largest U.S. state by population and area. Texas has a population of more than 29 million residents.

It is also quite important to know that Texas is also a site for fossils. A large number of fossils found in U. S. museums came from Texas. These fossil records spanned from the Precambrian age to the Pleistocene era. They contained the remains of extinct creatures like brachiopods, trilobites, and cephalopods.

Check out the list of 5 animal species that used to live in Texas.

The Bachman’s warbler is an extinct migratory bird that breeds in the thick and swampy forests of the United States. There were rumors that the Bachman’s warbler was recently sighted, but none has been proven true. Authorities believe the last sighting of this migratory bird was in 1988, while many still believe the last species was found in the 1960s.

The bird was named by Reverend John Bachman in 1832 when he found the species in Charleston, South Carolina. The average Bachman warbler is sexually dimorphic, and the adults have two different plumages.

In spring, the male Bachman’s warbler has a yellow forehead, a supercilium, and olive lores. The forecrown is black, and the rare is the same color as its lore. It has a yellow chin and upper throat with a darker shade of black down below. Also, their belly and underlain are white, giving the bird an attractive array of colors. In summer, their plumage looks fresher than that of the spring. The Bachman’s warbler measures up to 4.5 inches in length and has a short tail, which is relatively shorter than the other warbler species.

Experts believe the bird’s extinction is due to the crippling decline of deforestation and the winter hurricane of 1932.

Passenger pigeons were once found in Northern America in unbelievable numbers, as experts say their population was between the range of 3 to 5 billion. This makes it quite surprising to see their extinction. Passenger pigeons were the most abundant of this species in America, the continent, and the entire world. They could be seen in a massive population in the Great Lakes region, New England, and the flourishing forest of Eastern Texas.

Unlike regular small-sized birds, the passenger pigeons were 14 to 17 inches long and weighed 0.75 pounds. They were also sexually dimorphic and had many iridescent feathers on their necks. They fed primarily on tree nuts like acorns and berries and enjoyed devouring crops and farmlands. Their eating pattern was unlike other waves, as they swallowed acorns as a whole rather than pecking them out slowly.

Sauroposeidon, or Paluxysaurus, existed from 113 million years ago to 110 million years ago. They were initially described as the largest dinosaurs before the discovery of other sauropods. They were massive terrestrial habitats that depended on vegetation for nutrition.

They have a very long neck that allows them to eat the leaves on high branches of forest trees. Based on the fossil observations, the Paluxysaurus has four mid-cervical vertebrae and an extremely elongated neck that can be as long as 4 to 5 feet. Its neck bones are honeycomb-like with many air cells upon inspection. The cervical rib seems to be long and over 11 ft in length and can be said to be the most extended rib found in any mammal.

The first fossil of the Zatrachys was found in Texas. Edward Drinker Cope named it in 1878. The animal is an extinct genus of the flat-headed zatracheid from the Early Permian of North America. It can be easily identified by the presence of a large opening snout and the presence of a prominent spiky projection on its skull. Its lower jaw is adorned with ridges and bosses. This animal looked like a cross between a crocodile and a salamander and is often referred to as a queerly proportioned animal.

Merycoidodon is an extinct genus of mammalians, popularly called Oreodon, ruminating teeth, or hillock teeth. It is native to the grassland regions, which include Florida and Texas, and was extinct almost 30 million years ago. The Merycoidodon ancestors date back to the Eocene era.

Upon fossil inspection, a Merycoidodon would resemble a pig but with varying qualities. It has a longer body and would be at least 4 to 5 feet tall with short, stubby limbs.

Merycoidodon seems to have loved places with rich and plentiful vegetation, as most of their fossils were found in the grasslands. Their extinction might be due to the American Revolution and industrialization. 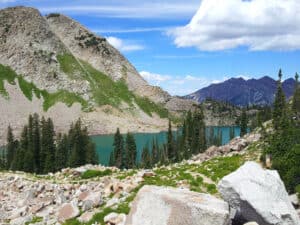