Written by Hailey Pruett
Updated: October 28, 2022
© Kurit afshen/Shutterstock.com
Share this post on:
More Great Content:
The 10 Best Lizards to Keep As…
Types of Lizards: The 15 Lizard Species…
The 10 Largest Lizards in the World
Are Komodo Dragons Poisonous or Dangerous?
9 Incredible Lizards That Look Like Dragons
Lizard Poop: What Does It Look Like?

Hawaii is home to a unique variety of reptiles ranging from tiny skinks to massive sea turtles and iguanas. Interestingly, none of the geckos in Hawaii are native–all have been introduced to the area by humans! Still, they’ve managed to make their home on the Aloha State’s lush island range.

Let’s take a closer look at seven of Hawaii’s most incredible geckos below.

One of the most vivid and colorful geckos in Hawaii is no doubt the gold dust day gecko, the handsome little lizard that inspired the GEICO company’s lovable mascot. While this gecko is actually originally native to Madagascar, it has also been introduced to Hawaii and a handful of other islands in the Pacific Ocean. Today, the gold dust day gecko is common throughout Maui, Oahu, and Hawaii’s main island.

These wide-eyed diurnal lizards, or “Mo’o” as they’re known in Hawaiian, are quite easy to spot thanks to their vibrant green coloration with orange, yellow, and blue accents. They’re fairly small at only 4 to 6 inches long and highly arboreal, and they often cling to palm trees and other plants in search of tasty nectar, fruit, and insects to munch on.

While most day geckos have a fairly mild-mannered if slightly skittish temperament, males can be quite aggressive towards each other when competing for mates and resources. They’ve become popular pets in the reptile hobbyist world and can live in captivity for around 15 years or more.

The mourning gecko is one of Hawaii’s smallest reptiles at only around 2 to 4 inches long. Despite its diminutive size, it is incredibly hardy and has an extensive geographic distribution. This ranges from East Asia all the way to parts of Africa, South America, and, of course, the Hawaiian islands, where it is not native but has long been established in the area.

These tiny, mottled grey and brown geckos are nocturnal, speedy, and reclusive. They tend to hide amongst dense foliage during the day while they rest, coming out only at night to hunt tiny insects.

Incredibly, virtually all mourning geckos are female! They are one of a handful of reptiles capable of parthenogenesis, a unique means of asexual reproduction. Females typically lay only one or two eggs at a time, and their babies are essentially genetic copies of themselves. Male mourning geckos are extremely rare and usually completely sterile.

These nocturnal geckos have made their way from Southeast Asia all the way to the Hawaiian islands.

This little brown and grey lizard goes by many names, such as the Garnot’s house gecko, the Assam greyish-brown gecko, and the fox gecko. However, its most popular name is simply the Indo-Pacific gecko for its geographical range. Despite being native to Southeast Asia, they’ve since been introduced to the warmer regions of the United States (primarily in Florida and Hawaii) and even the Bahamas.

At only around 5 inches long, much of the Indo-Pacific gecko’s total body length comes from its tail. It typically has a somewhat long, thin snout, wide, bulging eyes, and slightly keeled scales along its tail. Like the aforementioned mourning gecko, the species is completely parthenogenic. As a result, virtually all Indo-Pacific geckos are female and reproduce asexually!

Though small and skittish, Indo-Pacific geckos often live alongside humans in Hawaiian households and gardens. As a nocturnal and arboreal species, they stay hidden under dense leaves and branches during the day. They come out to socialize, mate, and hunt for small insects and spiders at night.

The common house gecko is another species with a long list of common names. Depending on where you live, you may have heard this species referred to as a wall gecko, a moon lizard, a house lizard, an Asian house gecko, or a Pacific house gecko. It is easily identifiable by its distinctive “barks” and chirping sounds it uses to communicate with other members of its species.

Originally native to Southeast Asia, this talkative, hardy lizard now has an extensive geographic range. It has spread effortlessly throughout Africa, the Middle East, much of Asia, the tropics, and even the more hot and humid areas of the Americas. They typically grow to around 3 to 6 inches long and are primarily grey, brown, or tan in color.

House geckos are especially common throughout Hawaii’s islands. As their name suggests, they are often found in urban areas hiding in cracks and crevices in homes, offices, and other man-made structures. Many people opt to keep a few house geckos around their homes, as the lizards happily chow down on a wide range of insect pests. Their noisy chirping is a bit of a nuisance, though.

Though it is, of course, invasive, the Tokay gecko is one of Hawaii’s most distinctive and easily recognizable lizards. This is mainly thanks to its bright orange and blue-spotted coloration, huge, bulging eyes, large size, and highly aggressive behavior.

As one of the largest species of geckos, the tokay is an incredible sight, often reaching lengths exceeding 12 inches. Their unique “To-kay!” mating call (from which their common name is derived) also sets them apart from other lizards.

While many East Asian cultures consider the tokay gecko a sign of good luck, the handsome geckos have unfortunately wrought havoc on many of Hawaii’s native species due to their invasive status. Hawaiian authorities largely believe the Tokay was introduced to the islands by the illegal pet trade. While habitat loss due to urbanization keeps its numbers somewhat low, it has proven to be an extremely persistent and adaptable species.

Incredibly, tokay geckos have become popular pets for the most determined and experienced reptile hobbyists. They do not make great pets for novices, however. This is because tokay geckos require a significant amount of handling and socialization in order to “tame down.” What’s more, their bite force is surprisingly powerful for their small size, and they will bite defensively often due to their territorial and aggressive temperament.

If you spot one of these stunning geckos in Hawaii or even elsewhere, make sure you observe it from a respectful distance!

The stump-toed gecko is another species with a long list of common names, including the sugar gecko, tender-skinned house gecko, common four-clawed gecko, and Pacific gecko. In Filipino culture, its name is the butiki. Though it’s originally native to Southeast Asia, it has since spread to Hawaii, where it is especially common on Maui.

This robust, hardy gecko has a rather pudgy body with an attractive purplish-gray base color and small, round, slightly darker spots covering the body from snout to tail. On average, it reaches around 3 to 5 inches long. Its tail is especially bulky.

Compared to many other geckos in Hawaii, the stump-toed gecko is surprisingly comfortable with human interaction. It spends the day hiding in dark cracks and crevices in people’s homes, where it only comes out to hunt at night. Like the common house gecko, some people opt to keep a few of them around! After all, the geckos are quite friendly and nonaggressive and even help to cut down on pesky insects like termites and ants.

You can think of this stunning gecko as the aforementioned gold dust day gecko’s cousin! The two species are closely related and have a similar appearance, diet, and geographical range. While they’re native to Madagascar, they’ve spread to various islands. They’ve even made their way to the United States’ warmer, more humid regions, particularly Hawaii and Florida.

Though the Madagascar giant day gecko looks very similar to the gold dust variety at a glance, the two are quite different in size. True to its name, this lizard is a giant, usually reaching 9 to 11 inches long! It is a nocturnal and arboreal species that primarily feed on fruit, nectar, and small insects.

Additionally, unlike gold dust day geckos, geckos of this species typically have small, distinctive red stripes stretching from their eyes down to their snouts. Their base body color is, of course, bright green, with random, asymmetrical red spots running down their backs.

Combined with their large size, their vivid coloration has made them quite popular in the exotic pet trade. However, they are difficult to handle, as they are somewhat territorial, aggressive, and fast-moving. 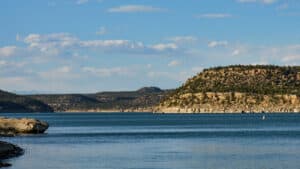