Written by Jeremiah Wright
Published: November 25, 2022
© iStock.com/DeVil79
Share this post on:
More Great Content:
6 Unique Venomous Spiders in Ohio
10 Spiders in Georgia
What Kills Bed Bugs Instantly?
The Top 10 Biggest Spiders in the…
How To Get Rid of Roaches Overnight
Carpenter Ants vs Black Ants: What’s the…
↓ Continue Reading To See This Amazing Video

As disgusting as it may sound, some bugs lay eggs on and under human skin! It’s essential to learn everything about these bugs and their transmission methods, especially if you live in regions where they are common. So, what bugs are bold enough to “colonize” our bodies? Keep reading to find out! We’ll tell you how they look, how they are transmitted, where they are located, and who’s at a higher risk of getting them!

The term “louse” (or its plural, “lice”) is used to refer to any of the 5,000 species in the Phthiraptera parvorder. These parasitic insects live on warm-blooded hosts among hairs and feathers. There are two types of lice: chewing lice, which feed on skin and debris, and sucking lice, which feed on their host’s blood.

Head lice live on the human scalp and feed on the host’s blood. They do not infect any other living creature besides humans. Head lice aren’t believed to transmit diseases, although their bites can cause secondary infections. These insects are very small, measuring approximately 0.09 – 0.11 inches long.

Body lice do not live on a human’s body. Instead, they settle on human pieces of clothing and “visit” their hosts only when they need to feed. They will cause numerous itching bites on the body that can, in turn, lead to secondary infections. Symptoms of severe and long-term infestation include lethargy, fatigue, and apathy. Moreover, body lice can transmit other diseases, too, including epidemic typhus, relapsing fever, and trench fever.

Crab lice are also called pubic lice. While they primarily inhabit a human’s pubic hair, crab lice can also be found in the perianal area and children’s eyelashes. Males are more prone to getting crab lice, as these parasitic insects can live anywhere on a man’s body. The main crab lice infection symptom is itching that becomes stronger and stronger. Fortunately, crab lice are not believed to transmit diseases, unlike body lice.

A study shows that louse infestation is linked to poor hygiene and cold weather.

Loa loa nematodes are also known as eye worms; they cause Loa loa filariasis. These worms grow up to 2.75 inches long and complete their life cycle on a human’s body. Transmission occurs through the bite of a deer fly. People in the West or Central African rainforests are at great risk of getting Loa loa worms, especially during rainy days.

The worms sometimes end up in the subconjunctival eye tissues. Luckily, eye worms do not usually interfere with their hosts’ vision but can cause pain if they move on the eyeball or cross the nose bridge to get to the other eye (eek!). The good news is that these worms live in the eyes for only about a week. They can also inhabit the kidneys, the heart, the nipples, the penis, the testes, and the nose bridge, where they’re more difficult to notice.

It takes around five months for the larvae to become adult worms in a human’s body, so symptoms may appear months after infestation. They can live in a human host for up to 17 years.

The main symptoms are the Calabar swellings, often located near the joints, which can be painful. Another dysfunction infected people can develop is lymphedema, also known as lymphatic edema. Moreover, dead worms can cause chronic abscesses and eventually lead to granulomatous reactions and fibrosis.

Even though the infection with Loa loa nematodes is generally considered safe (with the exceptions listed above), the treatment is complex. It involves chemotherapy and sometimes even surgical removal followed by systemic treatment.

Onchocerca volvulus is a type of roundworm primarily found in sub-Saharan Africa. People can get these roundworms through the bites of the female blackflies in the Simulium genus.

Male parasites measure roughly 0.9 inches in length and are much smaller than females, with an average length of 9 to 27.5 inches! They are most commonly found around streams and rivers. Once they reach the human body through blackfly bites, the juvenile roundworms get into the human bloodstream and, from there, to the subcutaneous tissue, where they spend around 6 to 12 months until they mature. Once they reach maturity, the parasites mate with females, and their eggs remain in the subcutaneous tissue.

Unfortunately, the infections caused by these worms are much more serious than the ones we’ve already mentioned. Onchocerca volvulus can cause onchocerciasis, also known as river blindness. This disease causes severe itching and bumps under the skin. If the infection is severe, it can lead to keratitis and blindness. It’s believed that river blindness is the second-most common cause of blindness attributed to an infection.

The drug that’s been considered most effective has started to lose its effectiveness since cases have been reported in which the worms somewhat developed a resistance to this drug.

There are currently around 187 million people at risk of infection, and approximately 17 – 25 million are already infected. 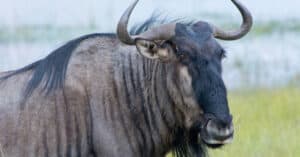