The hairless guinea pig is a relatively new breed that’s gaining in popularity. Their unique appearance makes them stand out from among the bunch. But like any new pet fad, it’s important to be prepared and do your research first before rushing out to buy one. Pet ownership is both a responsibility and a privilege. This guide will tell you almost everything you need to know about what they are, how to take care of them, and where to find them.

What is a Hairless Guinea Pig?

As the name suggests, the hairless guinea pig has little, if any, hair anywhere on its body. They tend to have rubbery skin with lots of wrinkles and drooping ears. The hairlessness can make them appear a bit strange and abnormal: some people have humorously compared their physical appearance to a miniature hippo. But apart from the lack of hair (and the care requirements that it entails), there actually isn’t much difference between hairy and hairless pigs in terms of behavior and temperament, except their metabolism rate is a little faster as they need more warmth due to lack of fur.

There are generally two recognized types of hairless pigs: the so-called skinny pigs and the Baldwin guinea pigs. The skinny pig has small patches of hair around the muzzle, feet, and legs. The Baldwin guinea pig, despite being born with a full coat of fur, is almost entirely hairless by around two months of age, except perhaps for a few tufts around the feet. The hair begins to fall out after two to five days, first around the head and progressing toward the hind feet. This is not a sign of sickness: it’s completely natural. The skinny and Baldwin guinea pigs have entirely different origins, which will be covered below.

How Was the Hairless Guinea Pig Created?

Crucially, for the purpose of this article, hairlessness is a recessive trait in both the skinny and Baldwin guinea pigs. The animal must inherit two copies of the recessive gene in order to be hairless. Breeding two hairless parents together will always result in more hairless guinea pigs. If it’s crossed with a hairy guinea pig, however, then the offspring will also have hair, but they will also now carry the recessive hairless trait. These pigs are known as hairless carriers and can either produce hairy or hairless offspring themselves.

The skinny guinea pig originally came about from a spontaneous mutation at a Montreal research facility in the late 1970s. Once this hairless recessive strain was identified, it was put to laboratory use as a test subject for dermatological products. It did not take long for people to realize their potential in the pet trade, however, and their popularity increased rapidly in the 1990s. The Baldwin guinea pig had a slightly different origin. It arose from a recessive genetic mutation in a white-crested golden agouti (a pig with a solid-colored stomach but otherwise striped or ticked fur). A Californian breeder named Carol Miller was the first person to notice this change and start to spread it.

You may be wondering: why do skinny pigs and Baldwin guinea pigs have different amounts of hair? That’s because their hairless traits actually involve entirely different genes. Simply due to the nature of genetics, there is rarely just a single gene controlling an entire trait, but rather multiple genes that all affect different traits simultaneously. This can lead to strange and unexpected outcomes. If you were to cross a skinny and a Baldwin together, for instance, the offspring would be a normal hairy pig. This is because they would inherit a dominant copy of both genes from the parents; for example, the Baldwin would have a dominant copy in place of the skinny’s recessive hairless trait, and vice versa. The offspring would still carry a copy of both the Baldwin and skinny hairless recessive traits and could therefore spread these traits to their offspring.

Despite lacking a luxurious coat, hairless guinea pigs are no less colorful than their haired counterparts. They normally come in black, chocolate brown, cinnamon, golden, gray, pink, white, and much more. Some of the most common patterns include brindle (dark streaks or patches mixed equally against a lighter background), Dalmatian (dark spots on a white background), Dutch (white body with colored patches on the face and rump), Himalayan (white body with darker extremities), tortoiseshell (two or more colors mixed throughout in larger patches), and solid. Both the color and pattern will depend on the type of pig (Baldwin vs. skinny) and its particular line.

Some websites claim that skinny pigs generally have a shorter lifespan than hairy guinea pigs. However, since no rigorous tests or studies have been done on its health and longevity, it is difficult to say for certain. The typical life expectancy for the skinny pig is thought to be five to seven years. Baldwin guinea pigs probably have about the same lifespan.

Hairless guinea pigs otherwise appear to be just as healthy as normal guinea pigs except in one important respect: their exposed skin makes them more sensitive to their surroundings. They’re easily irritated by wood chippings and bothered by the cold. Skin infections and scratches are also much more likely to occur.

In order to protect your pet from issues, there are a few sensible steps you can take to ensure your hairless guinea pig is receiving good care. First, it might be a good idea to use softer bedding such as fleece rather than harsh wood chips. Second, if you were ever to take your guinea pig outside for an extended period of time in the sunlight, then it’s important that you apply sunscreen to its skin or at least cover it to prevent direct exposure. Third, without hair to keep them warm, the optimal environmental temperature range for the hairless pig is between 68 and 79 degrees Fahrenheit (or 20 to 26 degrees Celsius). This is slightly higher than the average temperature for a haired guinea pig. Fortunately, their higher metabolic rate will produce all the heat they need, but they may need to be fed slightly more food than your average guinea pig, perhaps 1/6 cup of pellets instead of 1/8 cups.

What about skin moisturizers? Many owners mistakenly believe that their hairless pigs require moisturizers to stay dry, but this is actually a misconception. Like humans, their bodies produce natural oils to keep them well moisturized. The only time you may want to apply moisturizer is if, for whatever reason, the skin does start to visibly dry out or crack.

Fortunately, there are some aspects of its care that may prove to be easier without hair. Since bare skin is much less likely than fur to accumulate dirt and grime, they won’t need to be brushed very much at all except on their small patches of hair. Bath time is also a relatively straightforward procedure. After placing your pig in a box of lukewarm water, you should lather up its body with a very mild shampoo that won’t irritate the skin. When it’s finished, you should wrap the guinea pig in a soft towel to dry them. It’s not a good idea to use a hairdryer.

How to Buy a Hairless Guinea Pig

Most cavy breeders unfortunately don’t bother with hairless pigs; these lines can be a little finicky to breed and they’re not as well-regarded. Your best bet is to find a professional breeder in your area who specializes in hairless guinea pigs exclusively. Do your research and try to find a breeder who has a history of raising healthy pigs with few problems. Pet stores will sometimes carry them, but they don’t always adhere to the high standards of a professional breeder and might be a bit of a gamble. Sometimes these animals show up in local rescue shelters, but due to their rarity, there is no guarantee of finding one.

Hairless guinea pigs are likely to cost anywhere between $100 and $300, slightly more than average. You may end up paying more for care over the life of the pig as well. Because of their particular needs, it is probably a much better idea to pair multiple hairless guinea pigs together than to combine haired and hairless pigs, especially if you plan to house them together.

Sambar Deer vs Red Deer: What Are the Differences? 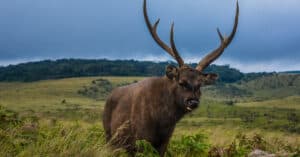